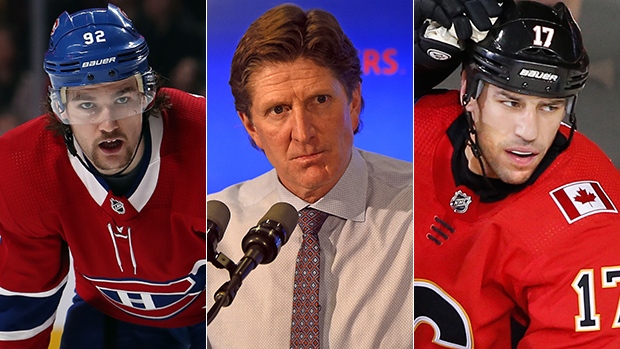 One foot’s in the frying pan, the other is in a pressure cooker.

That’s daily life in the National Hockey League, but the truth is the temperature is turned up a little higher for some.

Here are 10 hockey people – players, coaches, managers and executives – who begin the 2019-20 season on the proverbial hot seat:

Scoop: Babcock brushed aside speculation about his own job security in a training camp interview with The Athletic’s Jonas Siegel, insisting: “I can feed my family. I’m OK. I’m gonna be OK no matter what.” This is year five of Babcock’s landmark eight-year deal. There’s been unquestioned improvement and lots of turnover, but it’s now about results. After three straight first-round exits, it’s tough to envision Babcock seeing year six without this team taking a step forward in the postseason.

Scoop: It’s Stanley Cup or bust for Cooper, who owns the highest win percentage (.644) over the last seven seasons. They tied an NHL record for wins (62) last year and Vezina-winning goalie Andrei Vasilevskiy’s theory was Tampa tired after chasing those regular-season marks. Now Cooper will have to play amateur psychologist as he attempts to get this loaded Lightning team back on the rails following their epic first-round collapse.

Scoop: Habs GM Marc Bergevin downplayed Drouin trade chatter last week, saying it emanated “from somebody’s basement in Toronto.” He didn’t sound all that different before trading P.K. Subban in the summer of 2016. The truth is the kids are pushing and “Jo” is expensive. The 53 points Drouin collected during the 2016-17 season in Tampa was supposed to be the baseline, not the ceiling. In two seasons, Drouin hasn’t cleared that 21-goal bar – and he’s back on the wing, not at centre, after he was billed to be the Habs’ first great pivot in two decades.

Scoop: Acting on behalf of players who clearly didn’t have the stomach to fight, Fehr and the NHLPA took the NHL at commissioner Gary Bettman’s word last month, opting not to re-open the CBA. That created three years of much-needed labour peace, but it’s now up to Fehr to keep the NHL’s feet to the fire to hammer out a longer-term extension that provides players escrow relief and a full-fledged international hockey calendar.

Scoop: Just a few years after collecting 30 goals as a 21-year-old for the Canadiens, Galchenyuk is on his third team in three years after arriving in Pittsburgh in the Phil Kessel trade with Arizona this summer. It’s a low-risk, high-reward proposition for the Pens. But for Galchenyuk, who is in a contract year at 25, it’s put up or shut up. He might not ever get a better opportunity than now, starting the season with Evgeni Malkin and speedster Brandon Tanev.

Scoop: Technically, Lucic has three years remaining on his contract after this one. But this year may well be Looch’s last gasp to prove he’s still a viable NHL player – a question that definitely came into play in the second half of last season in Edmonton. He registered just six goals in 79 games, prompting a desperate summer swap of sorry contracts down Highway 2 with James Neal. It’s now or never to revive his career, before the cap-strapped Flames have no choice but to make his contract go away by any means necessary.

Scoop: Leave it to Caps coach Todd Reirden to perfectly sum up Kuznetsov’s status: “It’s a career-defining time in his life.” The Caps have expressed their support, and Kuznetsov his remorse, but how will he respond to his three-game suspension for inappropriate conduct? He wasn’t suspended for his positive test for cocaine at the World Championship, but for lying about his cocaine use to the NHL after a video with him partying near a powdery white substance surfaced before the test. Kuznetsov, who was arguably the Caps’ MVP in their 2018 Cup run but dipped last season, is undeniably at a crossroads.

Scoop: No one is suggesting – not for one second – that Poile’s 22-year reign as Nashville’s only GM is in jeopardy. But the Preds are going backwards, from Cup Final (2017) to second round (2018) to first round (2019), and this core of players is now the ninth oldest in the NHL. Nashville is better balanced now between forwards and defence. But a few questionable trades (Kyle Turris, Ryan Hartman, etc.) along the way have compounded the pressure for the NHL’s winningest GM of all-time to capture that elusive Stanley Cup at age 69.

Scoop: They said players like Subban don’t get traded, but now it’s happened twice in three calendar years. Subban suits up for his third squad with questions swirling – about his health, about the drop-off in his production, about the dynamic he brings to a dressing room. The brutal truth is the Predators made a decision that they couldn’t bring back Subban for another season. They felt the need to unload his $9 million contract at all costs. Now it’s up to Subban to change that narrative in New Jersey.

Scoop: This is Year 10 of the Tallon Experience in South Florida. He has exactly five playoff wins over two appearances to show for it. Now, Tallon has reunited with Stanley Cup-winning coach Joel Quenneville. Owner Vinnie Viola has given the green light to spend to the cap. Two-time Vezina winner Sergei Bobrovsky is in net. The message to the market has to be: “This is it.” No more looking to next year with a young core. Tallon has been removed from power there before; the leash can’t be incredibly long there now.