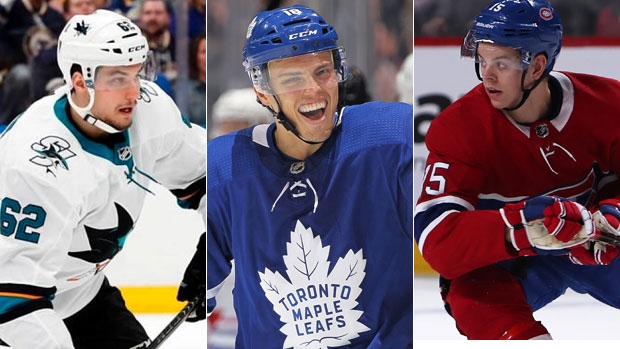 It’s an accomplishment in and of itself to become an established NHL regular, but it’s the players that can break through the next ceiling who truly separate themselves – in popularity, deployment and earning potential.

Who is ready to make that jump to NHL stardom this season?

We’re not talking about another uber-talented class of rookies, led by Jack and Quinn Hughes and Kaapo Kakko.

No, we’re thinking along the lines of Chicago’s Alex DeBrincat, who climbed from 28 goals two seasons ago to 41 goals last season with the Blackhawks. DeBrincat, still just 21, is the poster boy for breakout star, a player who now has Hawks fans thinking playoffs again.

Some young guns, such as Dallas’ Miro Heiskanen and New Jersey’s Nico Hischier, are already well on their way.

With the help of TSN’s director of scouting, Craig Button, who made realistic projections with what we’re calling the “Button Bump,” we’ve identified 10 players with the potential to break out as stars in 2019-20:

(Players are listed in alphabetical order)

Oliver Bjorkstrand, RW, Columbus Blue Jackets
Age: 24
Last Year: 77 GP, 23 goals, 13 assists, 36 points
Button Bump: 28 goals, 22 assists, 50 points
Scoop: Depending on how you view it, Bjorkstrand took a bit of a step back last season, sliding from 40 points in 2017-18 to 36 last season. But his number of goals more than doubled, from 11 to 23. Perhaps most tellingly, his average time on ice per game fell two minutes, an indication that John Tortorella wasn’t happy with Bjorkstrand’s game. Minutes won’t be an issue this season. With Artemi Panarin gone, it will be opportunity abound for Bjorkstrand.

Jack Campbell, G, Los Angeles Kings
Age: 27
Last Year: 25 starts, .928 save percentage, 2.30 goals against-average
Button Bump: 45-50 starts, .925 save percentage, 2.45 goals-against average
Scoop: Much of this prediction will depend on Jonathan Quick’s wonky groin. Nonetheless, it’s probably safe to say that Quick’s days of starting 60 games a season are over. Quick has started an average of just 42 times over the last three seasons. Even when Quick was in net last season, he didn’t look right, collecting a .888 save percentage. That should leave plenty of work for Campbell, who was sensational filling in, finishing 2018-19 with a .928 save percentage. It’s certainly possible that Campbell is a breakout star elsewhere. Remember: Ben Bishop didn’t become a full-time starter until age 26.

Ryan Donato, C, Minnesota Wild
Age: 23
Last Year: 56 GP, 10 goals, 15 assists, 25 points
Button Bump: 20 goals, 30 assists, 50 points
Scoop: Donato certainly raised eyebrows with the 16 points he put up in 22 games after arriving in Minnesota from Boston in February following a straight-up swap for Charlie Coyle. This could be one of those rare trades that end up working out for both sides - and it’s certainly Paul Fenton’s only trade from his one-year run as Wild GM that has that potential. Donato has plenty of game and he signed a two-year deal this summer with a $1.9 million AAV that could quickly be one of the league’s best bargains.

Samuel Girard, LD, Colorado Avalanche
Age: 21
Last Year: 82 GP, 4 goals, 23 assists, 27 points
Button Bump: 6 goals, 35 assists, 41 points - and "important minutes"
Scoop: Girard’s all-around excellence was on display in the Stanley Cup playoffs for the Avs, serving as the yin to Cale Makar’s yang on Colorado’s pair of the future. Girard was the steal from Nashville in the three-way swap that sent Matt Duchene to Ottawa and Kyle Turris to the Music City, a trade that Preds GM David Poile would probably like to do over now. Knowing that the price might rise with another season like the last, the Avs locked Girard up to a seven-year, $35-million deal over the summer that doesn’t kick in until 2020-21.

Filip Hronek, RD, Detroit Red Wings
Age: 21
Last Year: 46 GP, 5 goals, 18 assists, 23 points
Button Bump: 10 goals, 35 assists, 45 points
Scoop: Hronek started last season in AHL Grand Rapids, but by March he was averaging 22:33 a night for the Winged Wheel. He was outstanding representing the Czech Republic at the IIHF World Championship last May. The second-round pick (53rd overall) from 2016 is a solid bet to continue his upward trajectory, since this season should be all about development and improvement for Detroit’s young players.

Andreas Johnsson, LW, Toronto Maple Leafs
Age: 24
Last Year: 73 GP, 20 goals, 23 assists, 43 points
Button Bump: 24 goals, 36 assists, 60 points
Scoop: Take a look at Johnsson’s brief career history and it’s one of constant improvement. From Frolunda’s junior team in Sweden to the big club there, then to his two seasons with the AHL’s Marlies, it’s a story of steady progression. Coach Mike Babcock squeezed plenty of production from Johnsson last year in just an average of 13:40 minutes per game. With more ice time – and a start on what should be the Leafs' first power-play unit – should come more points.

Jesperi Kotkaniemi, C, Montreal Canadiens
Age: 19
Last Year: 79 GP, 11 goals, 23 assists, 34 points
Button Bump: 16 goals, 35 assists, 51 points
Scoop: What sophomore slump? Kotkaniemi was so impressive last season as a true 18-year-old, seemingly unfazed by anything the Canadiens and opponents threw at him. He finished fifth in Calder Trophy voting and there is plenty of room for him to take the next step. Consider: Kotkaniemi didn’t score a single goal on the road last year (zero goals, 11 assists). He was also relatively quiet following the All-Star break, collecting just five goals and six assists for 11 points in 28 games. He might have hit the proverbial rookie wall, but he’s ready to run through the next one now.

Kevin Labanc, RW, San Jose Sharks
Age: 23
Last Year: 82 GP, 17 goals, 39 assists, 56 points
Button Bump: 25 goals, 45 assists, 70 points
Scoop: Labanc inked one of the head-scratching contracts of the summer with an incredibly team friendly, one-year deal worth just $1 million. (See Donato above at $1.9 million, without a full season under his belt, let alone a 56-point campaign.) It’s clear that Labanc is betting on himself here – and GM Doug Wilson was comfortable with letting Joe Pavelski walk because he’s betting on Labanc to step in and fill his void on the ice.

Casey Mittelstadt, C, Buffalo Sabres
Age: 20
Last Year: 77 GP, 12 goals, 13 assists, 25 points
Button Bump: 20 goals, 30 assists, 50 points
Scoop: Talk to those in the Sabres’ organization and it’s clear that Mittelstadt arrived in training camp last year far from the physical condition required to compete in the NHL. Mittelstadt has all the talent in the world, but talent alone won’t make you a star. The bet is that Mittelstadt figured that out last season amid a disappointing campaign and will come back ready to make a statement for himself, much like he did at the 2018 World Junior Championship.

Jakub Vrana, LW, Washington Capitals
Age: 23
Last Year: 82 GP, 24 goals, 23 assists, 47 points
Button Bump: 31 goals, 28 assists, 59 points
Scoop: Vrana’s year-over-year improvement flew under the radar in NHL circles last year, climbing 20 points from his rookie campaign. There were certainly flashes of brilliance, including an 11-point month in 14 games last February. There isn’t much of a gap to close to get to 30 goals and 60 points, which the Capitals could certainly use, given that Evgeny Kuznetsov could be a wild card this season.