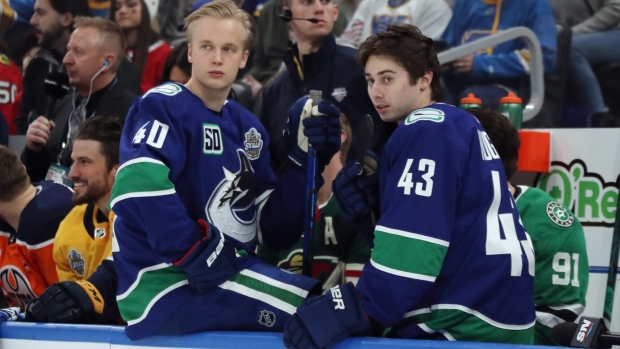 Watching Elias Pettersson and Quinn Hughes help carry the Vancouver Canucks to their best playoff showing in a decade comes with a small price.

The Canucks will be one of 13 NHL teams carrying a salary cap overage into next season, according to data compiled by CapFriendly and confirmed by NHL sources, for payment of performance bonuses that pushed them over this season’s $81.5 million ceiling.

The Dallas Stars will carry over a league-high overage of at least $2.95 million, while the Boston Bruins will pay out $1.93 million in bonuses.

Vancouver’s carry-over charge is third most at $1.7 million, split evenly between Pettersson and Hughes at $850,000 apiece.

That figure could still increase by $2 million to $3.7 million if the Canucks somehow dig out of their 3-1 series hole to the Vegas Golden Knights and Pettersson goes on to win the Conn Smythe Trophy as playoff MVP – a bonus cheque the Canucks would be more than happy to write.

Typically, all bonus overages from a given season apply in full to the next season’s cap.

But with the unique statistic ratios applied from a shortened season and a frozen salary cap, all 13 teams with overages from this season will be able to divide the amount equally over the next two seasons if they so desire, according to the NHL’s Memorandum of Understanding on a new Collective Bargaining Agreement.

Teams must make their decision seven days before free agency begins, or roughly by the end of the playoffs.

That could provide some flexibility for a team like the Canucks, who are already carrying dead cap space from Roberto Luongo’s recapture penalty ($3.03 million), Ryan Spooner’s buyout ($1.03 million) and Sven Baertschi being buried in the AHL ($2.29 million).

The Stars could still add to their league-high bonus total as their Stanley Cup run continues. Corey Perry is owed $100,000 if Dallas makes it to the Stanley Cup Final, plus another $150,000 if they win the Cup Miro Heiskanen is due a $1.65 million bonus if he is voted Conn Smythe MVP, which is a distinct possibility if the Stars hoist the Cup, given his phenomenal postseason.

There are other potential $212,500 bonuses up for grabs for the Blackhawks, Penguins and Capitals if Dominik Kubalik, John Marino and Ilya Samsonov are selected to the season-ending All-Rookie team.

Here is the team-by-team breakdown for bonus overages heading into 2020-21, with help from CapFriendly.com​: