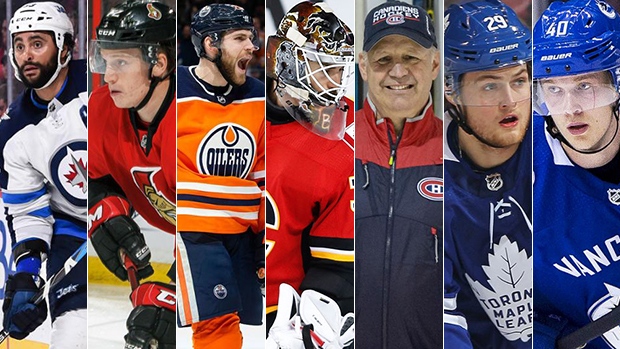 It’s that time again, my annual chance to look like a moron. Somehow, last year’s picks didn’t turn out all that awful.

The key is to go bold or go home. As John Tortorella famously said: “Safe is death.”

1. ANAHEIM - With fans expecting a retooling season, the Ducks will be one of the surprise teams in the West. John Gibson is arguably the best goalie in the NHL over the past three seasons, their young stars are poised to break out, and they have a new coach in Dallas Eakins who is familiar with them all.

2. ARIZONA - The Coyotes will miss the Stanley Cup playoffs for the eighth straight season. With Phil Kessel and another year under their belt, the Coyotes should be better, but there are still too many question marks on this roster – plus significant questions about the long-term health of Antti Raanta in net.

3. BOSTON - Torey Krug will remain with the Bruins past TradeCentre but walk as a free agent on July 1. Short of Taylor Hall, Krug is in position to be the most sought-after player potentially available next summer. The bet is he’ll never make it to the Trade Bait board as Boston GM Don Sweeney tries to maximize his team’s chances this season – even if that means losing Krug for nothing.

4. BUFFALO - Jason Botterill’s future as Sabres GM will be up for debate after Buffalo doesn’t come close to the playoffs for the third straight season on his watch. Maybe Botterill’s biggest win will be finding a way to keep perennial 40-point defenceman and minute-eater Rasmus Ristolainen happy and on the Buffalo blueline.

5. CALGARY - Kiss goodbye those dreams of another 100-point season, the Flames are taking a step back this year. Consider: the Flames brought three pieces down Highway 2 (Cam Talbot, Milan Lucic and Tobias Rieder) from one of the worst teams in hockey last season. What caused Calgary’s flame-out in the first round wasn’t lack of grit or toughness, it was Nathan MacKinnon.

6. CAROLINA - Can I get an encore? The Canes want more. They’ll get it as they return to the Eastern Conference Final for the second spring in a row, buoyed by perhaps the best collective of top-four defencemen in the NHL with Dougie Hamilton, Brett Pesce, Jaccob Slavin and Jake Gardiner.

7. CHICAGO - Robin Lehner will continue to author of hockey’s best stories as he carries the Blackhawks back to the playoffs after a two-year hiatus. He has plenty to prove after the Islanders wouldn’t commit to him long-term. Chicago was eighth in goals scored but 25th in save percentage last season.

8. COLORADO - The Colorado Avalanche will hoist the Stanley Cup for the third time in franchise history. One year after falling in Game 7 of Round 2, the Avs are more experienced, stronger down the middle (Nazem Kadri), ready to take flight on defence (Cale Makar), and have other young players (Tyson Jost) better positioned to succeed with more depth.

9. COLUMBUS - The Blue Jackets will slide back into no-man’s land, but it won’t be because of GM Jarmo Kekalainen’s gamble on inexperienced goaltenders Joonas Korpisalo and Elvis Merzlikins. It’ll be because Columbus won’t generate enough scoring.

10. DALLAS - GM Jim Nill will take home the GM of the Year Award. Signing Joe Pavelski will go down as one of the best moves of 2019. There are no obvious holes on the Stars, who are firmly entrenched in the top three of the Central Division with St. Louis and Colorado.

11. DETROIT - #APrayerForLafreniere. The Red Wings will win the 2020 Draft Lottery and pick No. 1 overall for the second time (Joe Murphy, 1986) in the entry draft era. With Alexis Lafreniere, or any one of the six players chasing him for the top spot, that’s a major piece in Steve Yzerman’s rebuild puzzle.

12. EDMONTON - Connor McDavid and Leon Draisaitl will see a drop in points, but the Oilers will be better for it this season, hitting the 90-point mark. Too much needs to go right – goaltending, more depth scoring and health on defence – for Edmonton to end up the top three in the Pacific, a division that will only qualify three for the postseason.

13. FLORIDA - Despite spending to the cap, signing Sergei Bobrovsky and hiring the best coach of his generation in Joel Quenneville, the Panthers will still miss the playoffs. Their overpaid defence keeps Florida out of the Big Three in the Atlantic, and the rest of the wild-card teams are right there on par with them.

15. MONTRÉAL - Claude Julien will win the Jack Adams Award for the second time in his career as coach of the year. The playoff-bound Habs will become the most exciting team in the NHL to watch with the injection of young guns Nick Suzuki and eventually Ryan Poehling to join Jesperi Kotkaniemi in Julien’s already up-tempo style. Julien didn’t get nearly enough credit for reinventing his approach last season.

16. MINNESOTA - It won’t take long for rookie GM Bill Guerin to realize that the Wild require seismic changes. Guerin won’t be afraid to make them. If you’re stopping in Vegas, take the Under 84.5 points for Minnesota, a team that appears to be going nowhere fast.

17. NASHVILLE. Hear that sound? It’s the Stanley Cup window slamming shut for the Predators, who have been going in the wrong direction since their 2017 Stanley Cup Final appearance. The Preds will be in a dog fight for a wild-card spot.

18. NEW JERSEY - Taylor Hall will ink a massive eight-year, $88 million extension with the Devils in the first month of the season, putting aside the Trade Bait talk early. It will be too much for Hall to turn down - and the Devils have too much to lose if Hall walks. As for the team itself, New Jersey will be right on the borderline of a wild-card spot.

19. NEW YORK ISLANDERS - The Isles will still be the same stingy team under Barry Trotz, but they won’t be able to keep last season’s magic alive. They’ll fall short of a playoff spot. The simple truth is that while the Islanders didn’t make many changes outside of the crease, the other teams around them just got better.

20. NEW YORK RANGERS - Going up against two Hughes (Jack and Quinn), Kaapo Kakko will capture the Calder Trophy as rookie of the year. Jeff Gorton’s Rangers will already be knocking on the door of the playoffs less than two years after writing a letter to Blueshirts fans announcing the rebuild.

21. OTTAWA - The Sens will not finish last in the Eastern Conference. Led by a scrappy collection of promising young players, Ottawa will catch a lot of opponents sleeping this season. But they’ll still be in the lottery hunt – this time with their own first-round pick, plus four other picks in the first two rounds.

22. PHILADELPHIA - Carter Hart will win the Vezina Trophy after leading the Flyers back to the playoffs. Philadelphia is a goaltending graveyard no more. Hart, 21, stopped 54-of-57 shots (.982 SV%) faced against NHL talent in the preseason. Fun fact: No ‘Hart’ has ever won the Hart Trophy.

23. PITTSBURGH - Evgeni Malkin is a monster again. He’ll take home the Hart Trophy for a second time as the Penguins take back the Metro after a four-year run by the Caps. Malkin is a man on a mission – and he’s free of Phil Kessel.

24. SAN JOSE - The Sharks are still a playoff team, but they’ll be taking a step back from last season’s trip to the Western Conference Final. Signing Erik Karlsson to an $11.5 million deal forced the Sharks to pay elsewhere, losing Pavelski and depth on defence in Justin Braun.

25. ST. LOUIS - There will be no Stanley Cup hangover for the Blues, who have as strong a chance to repeat as any champion in the salary cap era. They’ll ultimately fall short in the second round. The real question will be what rallying cry (“Play Gloria”) the boys come up with during their next visit to Philadelphia.

26. TAMPA BAY - After owning their historic first-round failure, Tampa Bay is ready to move forward. The loaded Lightning, who bolstered their roster with battle-tested players, will get back to the Stanley Cup Final for the second time under coach Jon Cooper.

27. TORONTO - Stuck between the Bolts and Bruins, it’s going to be more of the same for the Buds. Another first-round exit is on the horizon. There is no doubting the Leafs’ firepower and motivation this season (Auston Matthews will hit 50 goals), it’s the lack of depth on defence (Nos. 4-7) that makes breaking through to the other side of the Atlantic Division bracket a real challenge.

28. VANCOUVER - Elias Pettersson will notch his first 100-point season, joining the conversation among the Top 10 players in the game. Pettersson laughs at the idea of the sophomore slump. He’s that good – and he’ll drag the rest of the Canucks with him into wild card contention.

29. VEGAS - Powered by one of the best duos in hockey in Mark Stone and Max Pacioretty, the Golden Knights will win the Pacific Division for the second time in three seasons. As the class of the Pacific, they may have a date in the West Final if the Fortress isn’t stormed by one of the Central Division wild cards.

30. WASHINGTON - The “Great Eight” will now be the “Third Nine,” as Alex Ovechkin will tie Wayne Gretzky and Mike Bossy with a record ninth career 50-goal season. Steady as they come, Gretzky’s overall goals record (894) will come into better view for Ovechkin, who enters the season with 658.

31. WINNIPEG - The Jets will fail to make the playoffs, regardless of whether Dustin Byfuglien decides to return or hang up his skates. Even with him back, the Jets don’t have the defence corps to make it through the murderous Central Division alive.

Tell Frank Seravalli he is right or wrong all season long on Twitter: @frank_seravalli