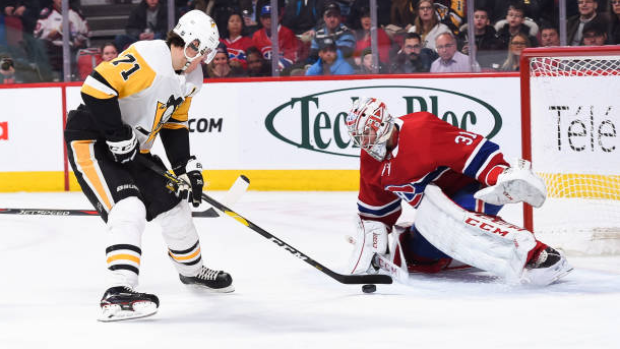 Hockey is inching closer to a return to the ice.

Exactly 10 weeks after the National Hockey League pressed pause on the season, the league and the NHL Players’ Association have hashed out an initial framework of how the Stanley Cup may be awarded in 2020 with a 24-team Return to Play format, pending approval from both sides.

Details remain fluid and are still subject to change. The NHL has not yet briefed its teams or GMs on the latest proposal.

Even if the who is decided with the teams involved, the when, where and how are key pieces in the return-to-play puzzle that still need to be sorted out. It is impossible to piece together a timeline for return without those answers, plus the NHL hasn’t selected hub cities.

But for the first time in months, hockey fans could soon be able to sink their teeth into the bracketology that NHL commissioner Gary Bettman loves.

In this 24-team proposal, the top 12 teams from each conference, based on points percentage, will play on, with the top four in the East and West (regardless of division) each receiving a bye to the actual playoff portion.

Those top four teams would play each other in a three-game round robin. It remains unclear how exactly the round-robin formula will work, but the belief is that those games will not simply be warmup exhibitions – they could provide opportunity for those four teams to change their seeding.

While that round-robin is occurring, the remaining eight teams would square off in best-of-five, play-in series.

The winners of those play-in series would determine the 16 playoff teams, then be bracketed to start the chase for Lord Stanley.

Here is what the bracket could look like without any changes to the seedings of the four top teams in each conference: 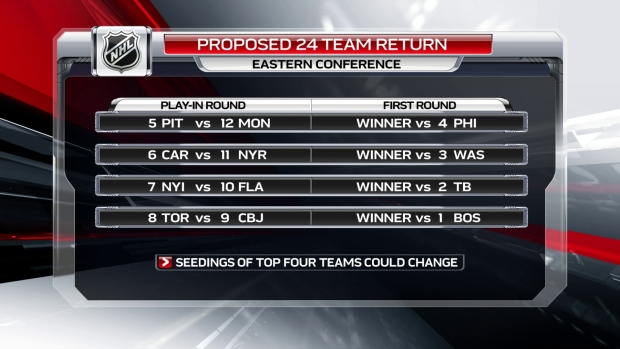 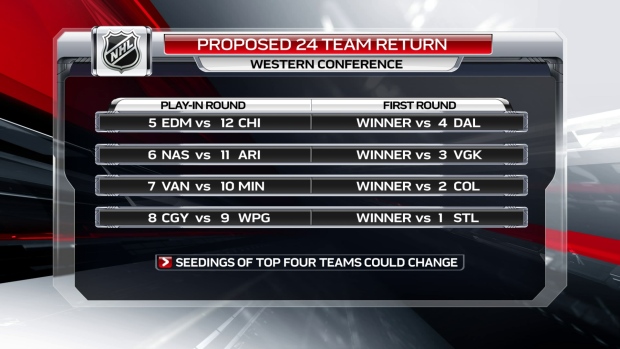 NHL GMs have privately expressed their frustration with bracketing the playoffs, with some arguing the rounds should reseed. Their argument is that the regular-season points accrued by the top teams should warrant them the best matchup possible. For instance, if No. 12 Montreal beats No. 5 Pittsburgh, some GMs feel No. 1 Boston should get to face No. 12 Montreal instead of the winner of the matchup between No. 8 Toronto and No. 9 Columbus.

Bettman’s answer to that could be a simple reminder that the eighth-seeded Columbus Blue Jackets swept one of the best regular-season teams in the salary cap era last spring in the Tampa Bay Lightning.

Top-tier teams have also grumbled that clubs like Montreal and Chicago, two franchises with no realistic shot at the playoffs had the regular season finished as scheduled, would now be given a crack in a five-game series to play on.

No format, as Bettman has conceded, will leave every team or player happy.

“We don’t live in a world of perfect anymore,” Bettman said in April. “We’re going to have to make adjustments.”

Many hurdles remain, including development of a comprehensive COVID-19 testing plan, acquiring those needed tests, then putting the logistics into action to bring two or four arena complexes to life as host sites with hundreds of players, personnel, and support staff in the bubble.

The NHL has focused recently on staging the 24-team resumption in two hub cities. Las Vegas is believed to be a front-runner – a city eager to host with ample hotel space to include players’ families.

Edmonton, Toronto and Vancouver have all jockeyed to host the NHL, but federal and provincial quarantine restrictions may limit their bids’ viability. That would mark the first time the Stanley Cup playoffs have not been contested in Canada since 2015-16, when all seven Canadian clubs failed to qualify.

But with the bracket as constituted, Calgary and Winnipeg would square off in Canada’s first one-anthem playoff series since 2014-15.

With no fans in arenas to start, the site itself is somewhat irrelevant.

The NHL is not close to naming hub cities yet, other than whittling the group down to eight or nine potential hosts. The league wants to remain nimble, waiting until the last possible moment to see how the pandemic shifts with regard to hot spots.

There is no rush.

The NHL and NHLPA remain hopeful that movement to the next step, Phase 2 in the protocol, can begin with players returning to the bulk of team facilities to train in small groups after June 1.

From there, it is difficult to piece together a best-case scenario for the Stanley Cup to be presented. Phase 2 is voluntary, but players would then soon be called back to their club’s home city so that training camp and Phase 3 can begin. Players have requested a three-week training camp.

Even though the NHL is not concerned that border closures will impact their plans, those closures have limited commercial flights, which will make player travel another hurdle in the process. NHL commissioner Gary Bettman said this week that 17 per cent of the league’s players are currently riding out the pandemic in Europe.

Not all of those players would need to return. A 24-team format means the season would be over for Detroit, Ottawa, San Jose, Los Angeles, Anaheim, New Jersey and Buffalo. That would officially mark the Sabres’ ninth straight season outside of the playoffs and the first time since 1995-96 that all three California clubs missed. Those seven clubs face the prospect of not hitting the ice for up to nine months, depending on when the 2020-21 season starts.

That would also mark the official conclusion of the regular season. We’d all miss out on the resolution to one of the best Rocket Richard races in recent memory, with a three-headed monster of Alex Ovechkin, Auston Matthews and David Pastrnak going down to the wire for goal-scoring supremacy.

But the end of the regular season would mean hockey is back.