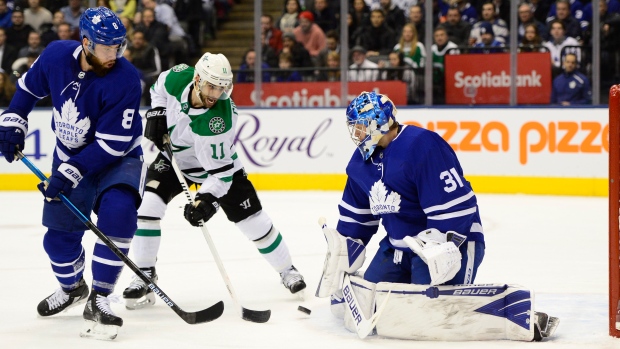 Frederik Andersen makes a save on Stars centre Andrew Cogliano as Jake Muzzin looks on. , The Canadian Press

That was the NHL.com headline after Toronto’s disappointing home-ice loss to the Dallas Stars in early February. Read that headline once and you would think that Andersen and the Maple Leafs’ defence were bleeding goals all night long.

But the box score (3-2 Dallas, in regulation) doesn’t exactly reflect that. In fact, the goals from Denis Gurianov, Radek Faksa and Tyler Seguin were really the only compelling offence Dallas generated all night.

The bigger story was the performance from the Stars in the defensive end. The Stars were out-attempted 72 to 35 on the night, but of those 72 attempts, only 31 made it to the net.

The Stars – who had very little of the puck all night – did a great job pushing Toronto into tougher shooting lanes and blocking shots as a last resort. Of the 31 shots that made it to goaltender Ben Bishop, only Zach Hyman and Auston Matthews managed to score.

If you look at Toronto’s shot map (via HockeyViz), you see two things: a flurry of offensive zone activity, and a degree of difficulty in turning shot attempts into shots on goal: 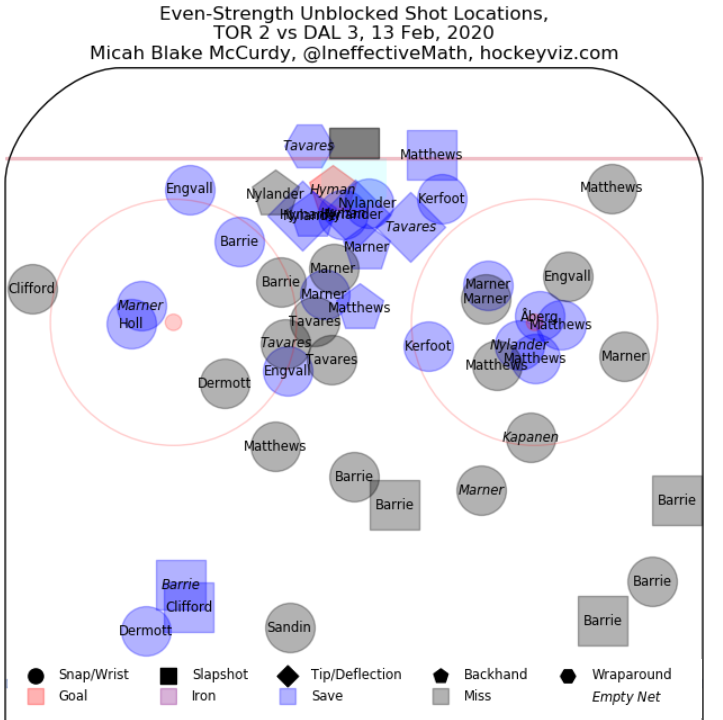 While I think Dallas coach Rick Bowness would be pleased with the stick-to-itiveness of his team, it’s also fair to say that this game was stolen. The Stars barely had the puck, and even conceding their defensive structure and off-puck play was sound, were still outshot and outchanced on a 2-to-1 basis.

Quantifying stolen games can be a bit difficult, especially since there is such a considerable impact from goaltenders.

A goalie standing on his head, so to speak, can turn a grim differential on shots or scoring chances into a victory; a goaltender on a bad night can turn an otherwise fantastic team performance into dust. The reality is you usually need a little bit of both to truly steal a game.

With a pause in the regular season, I wanted to come up with a quick way to segment or quantify stolen games and see just how disparate real performance versus win/loss outcome can actually be.

To isolate on these games, I focused on shot differential and expected goals (adjusting shots for quality). The average team took about 57 shot attempts per game in the 2019-20 season, with an expected goal rate of 2.72.

It’s an interesting mix of undisputed blowouts – that 7-1 victory by the Buffalo Sabres over the New Jersey Devils was an early train wreck – and competitive games that were played at one end of the ice.

Vegas, for example, is the only team here that had two games stolen from them, based on our logic. The first was a 4-3 loss to Pittsburgh back in January in which the Golden Knights attempted 40 more shots at the net and, on average, would have won that game by about two goals. Two months later, they could not find an answer for Los Angeles depth goaltender Cal Petersen, who stopped 42 of 43 shots for the Kings at T-Mobile Arena.

In both scenarios Vegas played most of the game in the offensive zone, and in the rare chance they had to defend the run of play, the puck beat Marc-Andre Fleury.

The most lopsided game of the season probably belongs to that Oct. 16 matchup between Edmonton and Philadelphia.

Mikko Koskinen’s Herculean 49-save effort – combined with the Oilers beating Carter Hart and Brian Elliott six times on just 22 shots – tells the story. But expected goals in this game were 6.5 – 1.9 in favour of Philadelphia. Why? Just look at what Koskinen faced that night from just outside of the crease! 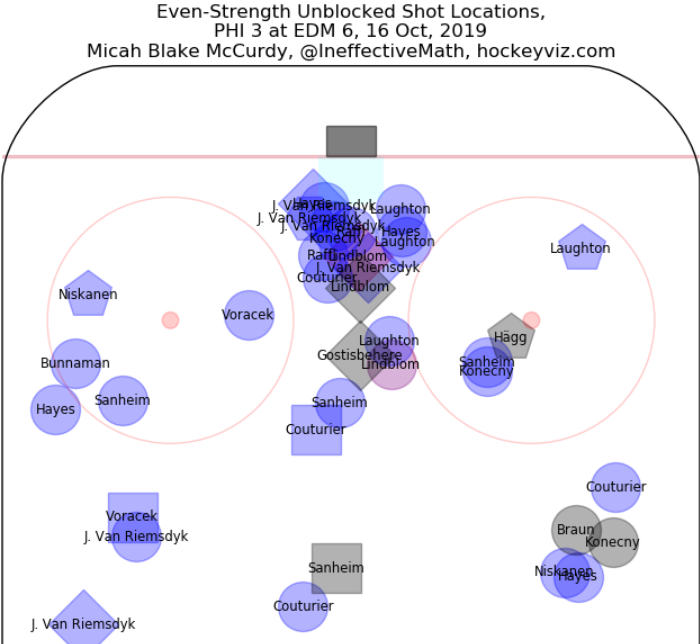 The Oilers’ offence has bailed Edmonton out a number of times this season, but none greater than on that night. To that end, I’d say the biggest steal of the season is hereby awarded to Koskinen and the Oilers.

To win a game where you barely have the puck by a score of 6-3 is, in one word, unlikely. But the points count all the same.