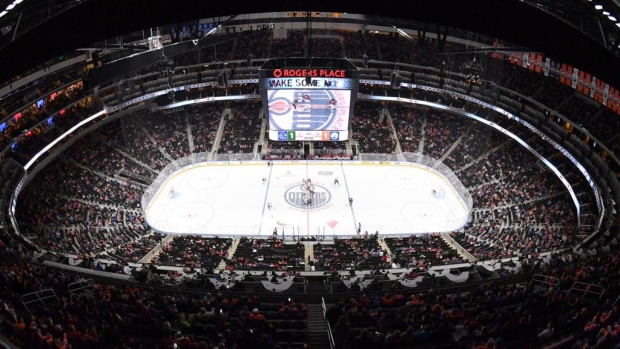 There are few guarantees when it comes to the fallout from the spread of COVID-19.

But the National Hockey League’s announcement the San Jose Sharks will abide by a Santa Clara (Calif.) County ban on gatherings of more than 1,000 people likely represents the first domino to fall in terms of guaranteed lost revenue for the league.

The NHL has yet to announce how the Sharks will approach their next scheduled home date March 19 against the Montreal Canadiens.

They can elect to play at SAP Center in the absence of fans; they can relocate to a neutral site venue; or they can postpone and re-schedule the contest for a later date.

TSN Hockey Insider Pierre LeBrun said Tuesday, “I’m told that the leading option right now is to play March 19 against the Montreal Canadiens in front of empty stands, which would be uncharted territory for the NHL. Nothing definitive, but that’s the leading option.”

But so much can change over the next eight days as the NHL continues to monitor the outbreak on an hour-by-hour basis.

While it’s one market impacted for now, that is significant because the NHL is the most gate-reliant for revenue among the four major North American professional sports leagues. Dollars lost would multiply if more games are impacted as the disease spreads across the continent.

Let’s take a look at how the coronavirus could impact the NHL’s bottom line.

Is the NHL covered by insurance?

The answer is very likely yes. The larger question is: To what extent?

That is a question NHL deputy commissioner Bill Daly said last week the league has been "attempting to wrap its arms around" for weeks. Daly said the answer likely varied from the league to club to club.

The NHL, as an entire league, could be insured differently than its teams. The policies covering each individual club might also vary, particularly the American franchises versus the Canadian ones.​

Ryan Tocicki, president of Los Angeles-based Premier Insurance Services, is an expert in event cancellation insurance who works with major professional sports leagues. Tocicki does not have direct knowledge of the NHL’s insurance coverage, but said most leagues opt to pay for coverage for “communicable disease-related losses.”

To what extent depends on how the policy is worded, which endorsements or riders are purchased and what policy limits are set.

“Once a communicable disease has been declared an epidemic or pandemic by the WHO [World Health Organization] or a federal government agency, certain policies exclude coverage,” said Tocicki. “Most event cancellation insurers offer a Communicable Disease Endorsement that can be purchased for an additional premium that would provide specified coverage for losses arising from an outbreak of communicable disease, regardless of declaration of epidemic or pandemic – such as when a government entity orders the cancellation, postponement or relocation of a scheduled game.

“It is important to note, however, that losses resulting from ‘threat or fear of communicable disease’ are typically excluded under event cancellation policies.”

In other words, insurance coverage may be one factor why the NHL has not acted on recommendations from local health authorities so far, waiting until they are ordered. The threat of communicable disease may not trigger coverage alone, but being ordered to cancel, postpone or relocate would allow the NHL to potentially recoup losses through insurance.

The states of California and Ohio and the city of Philadelphia were the latest government entities to recommend avoiding mass gatherings on Tuesday. If the Santa Clara timeline is any indication, that could mean all three NHL teams in California, the Columbus Blue Jackets and the Philadelphia Flyers could be affected by outright bans in relatively short order.

What is the lost revenue’s effect on the salary cap?

There are two things to consider with the impact of lost revenue: the short term (this season) and the long term (next season and beyond).

This season’s salary cap is a projection of the players’ share of the 50-50 split of hockey-related revenue with owners. Total NHL revenue is estimated to be in excess of $5 billion (US).

If there is a significant loss in revenue this season, NHL players will be responsible for a rebate to ensure a 50-50 split because the amount they have collected in paycheques will represent more than what the owners receive.

To date, the NHL has not asked the NHL Players’ Association to increase escrow withholding for the final three paycheques of the season, to be paid on March 15, March 30 and April 15.

One reason for that is that there is already what amounts to a small margin for error in place. More money is withheld in escrow than is typically required. Last season's return has not yet been calculated. But two seasons ago, the players received a small portion of their money held in escrow back once final end-of-season financial calculations were done. NHL players have set aside 14 per cent of this season’s salary in escrow to ensure that 50-50 split.

“I think that there is enough of a buffer right now that there isn’t that much cause for concern yet, but the situation is still very fluid,” said Stew Gavin, founder of the Gavin Group, which manages and invests money for current and former NHL players. “I don’t think anyone really knows what the numbers would look like if the league would be shut down for a period of time.”

Gavin, a former NHLer himself, said he has not asked his clients to prepare or conduct business in any way out of the ordinary. But they are monitoring the situation closely.

“This is part of what we do, part of the education. We’re very conservative, we teach players to put money away, to plan and save,” Gavin said. “There is a lot of noise out there; you see a lot of red reading the market on the TV screen. The headlines say one thing, but the reality is different. We were probably due for a market correction or pullback, and I think this [coronavirus impact on the economy] just accelerated it.”

But in the longer term, substantial revenue lost would have a direct impact on next season’s salary cap. There is a provision in the Collective Bargaining Agreement that any money owed to the owners by players in excess of what was collected in this season’s escrow account comes directly off what is owed to the players next season - thus reducing the salary cap.

The coronavirus’ impact on the economy at large, including a sharp downturn in the Canadian dollar this week, could also have a negative impact on next season’s revenue because approximately one-third of the league’s revenue is in Canadian currency.

“There is a lot of uncertainty right now and I think the concern is the unknown,” Gavin said. “There is still a lot to play out.”