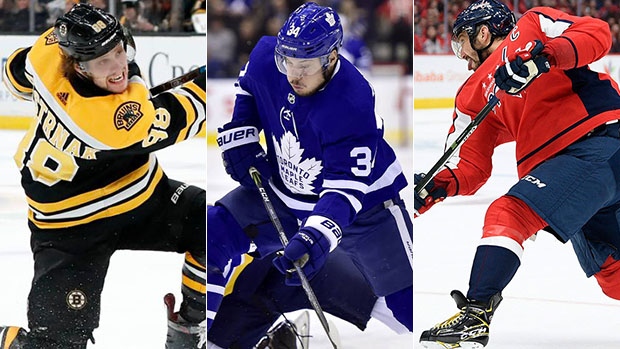 The National Hockey League’s Return to Play announcement on Tuesday brought some much-needed hope that the Stanley Cup can be awarded in 2020.

But it also meant that the book is now officially closed on the 2019-20 regular season for every hockey league in the world.

Even if that seemed inevitable, as the NHL hits Day 76 of the pause during the COVID-19 pandemic, there are many rites of spring that we’ll miss. There were so many scores left to settle.

Call it a requiem for the regular season:

1. We’ll miss the conclusion to the most thrilling Rocket Richard Trophy chase in recent memory.

It was a three-headed monster going down to the wire, with Alex Ovechkin and David Pastrnak tied with 48 goals and Auston Matthews one back at 47. That means there will be no historic 50-goal seasons. It would have been a record-tying ninth for the Great Eight – who also lost out on one during the 2012-13 lockout-shortened season. Matthews, 22, was three goals away from becoming just the fourth Leaf to achieve the feat, and he had a legitimate shot at Rick Vaive’s franchise record of 54.

2. Alexis Lafreniere will miss out on the chance to become only the second player to win World Junior gold, a Memorial Cup and be selected No. 1 overall in the same year.

Taylor Hall is the first and only player to manage the feat; Eric Lindros did it the year before he went No. 1, and Dale Hawerchuk missed out on the World Junior gold. The Memorial Cup was cancelled back on March 23, making 2020 the first time Canada’s national junior crown wasn’t handed out in 101 years. Still, two out of three isn’t bad, and Lafreniere might learn his future NHL home on June 26 with the Draft Lottery.

The Rangers centre closed the campaign with an unbelievable 24 goals and 40 points in his final 25 games. Despite missing 13 games over the course of the season due to injury, Zibanejad had an outside shot at hitting 50 goals on the season. He finished with 41 goals in 57 games – the best goals-per-game ratio in the league (.72) - and is a big reason why the Broadway Blueshirts are in the 24-team play-in.

4. We’ll be left wondering about one of the great trade conditions of all-time.

James Neal needed to hit 21 goals and Milan Lucic needed to score 10 or fewer goals than Neal for a third-round pick to transfer from the Oilers to the Flames. Neal ended up at 19; Lucic was at eight but scored twice in his last four games. Eventually, the NHL will make a determination on the pick - it may end up transferring based on projected goals per game – but we’ll always wonder whether they would have gotten there.

5. Josh Norris and the rest of the Baby Sens won’t get a chance to win a Calder Cup.

Aside from a potentially transformational Draft Lottery, the Senators were most looking forward to a Calder Cup run in Belleville. It would have been a significant achievement for a franchise that has built up one of the best prospect bases in hockey. Alex Formenton, Drake Batherson, Norris, Logan Brown, Erik Brannstrom and goalie Filip Gustavsson all would’ve gained valuable experience before the AHL pulled the plug on its season.

6. We’ll have to wait for the debut of Alexander Romanov in Montreal and other high-profile college signees.

NHL deputy commissioner Bill Daly said Tuesday he expected no contract will be eligible to be signed for the remainder of the 2019-20 season: "To add a couple of ‘ringers,’ for lack of a better term, when you’re going into the playoffs is not the best way for sports to proceed in our view." That means Romanov and the five other players who agreed to terms but waited to sign their deals will have to wait until next season: Florida’s Grigori Denisenko, Chicago’s Ian Mitchell, St. Louis’ Hobey Baker Award winner Scott Perunovich, and San Jose’s Brinson Pasichnuk and John Leonard.

7. There won’t be any last-second, late-season opportunities to impress trophy voters.

Think back to Taylor Hall and the Devils’ push for the playoffs in 2018, which helped solidify Hall’s case for the Hart Trophy. That’s gone. Voters from the Professional Hockey Writers Association will have to rely on the cases already stated, including the razor-thin race for the Calder Trophy between Vancouver’s Quinn Hughes and Colorado’s Cale Makar.

It’s become vogue for NHL teams to fire coaches and GMs on the Monday following the regular season. The pandemic, and the resulting 24-team format, may have cooled some hot seats, like in Florida for GM Dale Tallon if the Panthers can make some noise now. There are still four interim coaches awaiting their fate: Dallas’ Rick Bowness, Minnesota’s Dean Evason, New Jersey’s Alain Nasreddine and San Jose’s Bob Boughner – plus the Devils’ ownership needs to decide whether to make interim GM Tom Fitzgerald the permanent choice.

This is a positive, not a negative. By and large, almost every team will be fully healthy whenever the season resumes. Here’s a list of players who are likely to be ready for action after long layoffs: Dougie Hamilton, Seth Jones, Vladimir Tarasenko, Chris Kreider, Jake Guentzel, Mark Stone, Sami Vatanen, Ilya Mikheyev, Victor Mete, Tomas Tatar, Oliver Bjorkstrand, Adam Pelech and James van Riemsdyk. For some players injured right before the pause, they’ll end up missing very few games overall.

10. Most of all, we’ll miss the down-to-the-wire playoff races.

Almost every season there is a spot, or multiple spots, up for grabs heading into the regular season’s ultimate weekend. But hey, we’ll take any kind of hockey we can get – especially a March Madness-style 24-team format with upwards of six games a day at the start.