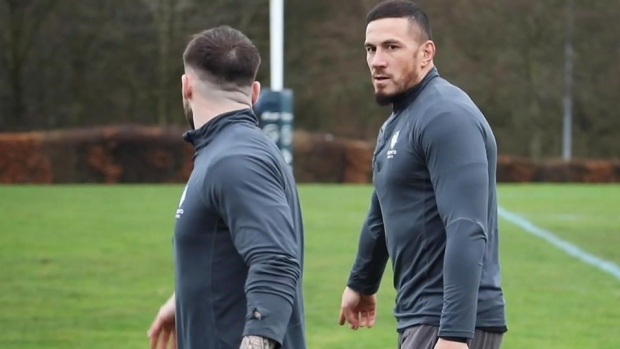 A marquee name that has become a mega-brand in the world of rugby, Sonny Bill Williams is looking to keep things simple as a member of the Toronto Wolfpack.

The 34-year-old former All Black is relying on his past experiences in transitioning from one rugby code to the other as he makes the move back to rugby league from rugby union.

"The old saying Rome wasn't built in a day. And this process doesn't take a day," he told The Canadian Press from England. "But although I have the confidence in what I'll be able to achieve and how I'll be able to add value to this outfit, I think I just have to be real myself and understand that it is a process."

In the world of Islam, the answer is Sabr — patience.

"It's kind of like building a house, you've got to have great foundations for it to stand the test of time. I know that's the truth, coming back to rugby league or going to rugby union."

Williams has not played league since 2014 (with the Sydney Roosters in Australia's NRL).

He has won championships in both union and league and has a glittering sporting resume. He has competed at three Rugby World Cups — winning two — and was part of the New Zealand rugby sevens team at the 2016 Rio Olympics before rupturing an Achilles tendon.

Rugby league is played with 13 men while union features 15 a side. Union is more free-flowing while league teams have six plays to go the length of the field.

Williams signed a two-year deal with Toronto in November worth a total of $9 million, with the Kiwi getting an ownership stake in the transatlantic team, according to a source granted anonymity because they were not in a position to publicly divulge the information.

He joined the club at training camp in early January and is set to make his Wolfpack debut Sunday against Castleford Tigers in Toronto's first outing in the top-tier Super League. With 10 teams in England and one in France, the Wolfpack are now a member of the top rugby league circuit in the Northern Hemisphere.

Wolfpack majority owner David Argyle has big dreams for his team, with Williams its leading light.

Williams understands the expectations of his big-money move to North America, but says all he can control is his preparation, performance on the pitch and mental outlook.

"That's how I look at things, whether it be people using me for my name or Super League," he said. "Obviously trying to keep the game building or growing. That's what they do, that's what they have to do, I guess. I understand that fully coming into this agreement with Toronto Wolfpack because we're trying to build the game and in North America you have to sell yourself a little bit more than I'm used to.

"So yes it's uncomfortable at times and yes it's pressure," he added. "But I think if you look at it simply — control your own controllables and look at things with a glass half-full mentality, you're bound to be in a better place than not.

For Williams, a glass half-full means "nothing's a failure, everything is a learning experience.”

Williams seems an unlikely accelerant, given his simple touchstones away from the pitch.

"My life revolves around my faith and my family," he said. "And (rugby) football is just the icing on top ... My family and faith definitely allow me to thrive in the game of rugby league."

Williams already has a house in England and plans to have wife Alana and their young family with him on both sides of the Atlantic. They already have a son and two daughters with a fourth child due soon.

Williams has been given permission to miss the third game of the season — Feb. 13 against Wigan — to return home to New Zealand for the birth. Game 4 is Feb. 21 against Warrington, giving Williams a decent break.

"I fought tooth and nail to try and get her to come over here and have (the) baby here (in England) ... I'm setting up shop for the arrival of the family, that's for sure," he said.

For those wondering, Williams usually goes by Sonny. His mother is more formal, however.

"If my mom's around, she'll be sure to correct them," he said.

His full name is actually Sonny William Williams. His grandfather's name was William, but everyone used to call him Bill. And his grandson became Sonny Bill.

Sonny Bill didn't discover his full name until he got his first passport as a teenager.

Part of the appeal of playing in North America for Williams is life may be a little quieter away from the pitch than the fishbowl of Australia and New Zealand.

"Definitely. I'm not going to lie. It's one of the more exciting things about coming over there," he said. "And to an extent, in England as well."

Williams says dealing with the baggage and attention that comes with fame is helped by his mindset of "I'm not better than anybody else."

"That type of stuff doesn't really bother me, whether people recognize me or don't recognize me. I really enjoy it when people come up to me — from young ages to older people — when they come up and just want to have a yarn and talk. I enjoy that, I enjoy giving my time in that sense.

"But at the same time, just like with anyone, when I'm with my family or someone's rude, that tends to tick me up the wrong way."

"Alhamdulillah, as we say as Muslims, " he added. "Thank God. I'm very blessed to be in the position that I am."