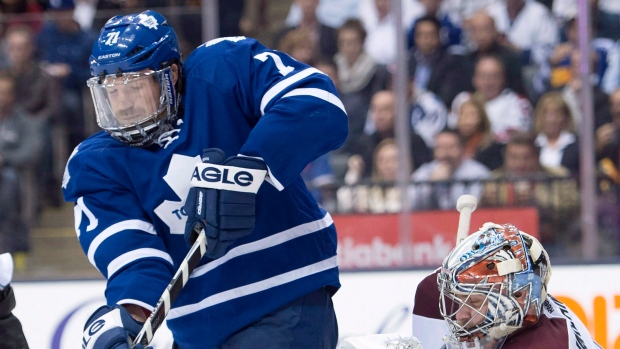 TORONTO - David Clarkson has had so many injuries in just over a year with the Toronto Maple Leafs that three-year-old daughter McKinnley is taking a keen interest in her father's health on the ice.

"Before the game now instead of saying, 'Good luck,' she'll say, 'Don't get hurt,'" Clarkson said.

Instead, Clarkson strapped on a cage mask and then a full shield — doctors' orders so he could get back onto the ice. The result has been a strong start to his second season with the Leafs.

"It's a much different David Clarkson this year than what we had last year," coach Randy Carlyle said Thursday. "We said it's a reset situation and he felt that he needed that, and then the addition of the ice time and the fit with the line that he plays with and the minutes he's getting, he's getting a chance to make more of a contribution, but he's earning it."

The biggest difference is Clarkson has had the opportunity to make a contribution at the start of this season. Last year he was suspended for the first 10 games after leaving the bench during a pre-season brawl with the Sabres.

Clarkson made his debut in blue and white on Oct. 25, 2013 on the road against the Blue Jackets. On Friday night he and the Leafs return to Columbus, but this time the Toronto native is healthy and already in a groove.

"It's tough just to fire into a season 10 games in," Clarkson said. "I think right now I feel pretty good. I feel back like myself again."

Clarkson has two goals and an assist in a third-line role alongside Leo Komarov and Mike Santorelli and has seen some time on the second power-play unit. He had five goals and six assists in 60 games in 2013-'14, a disappointing performance to say the least after signing a US$36.75-million, seven-year contract.

But the weight of contract expectations paled in comparison to the way the suspension hampered Clarkson's start.

"You're coming from a different organization, you're trying to learn a new system, you're trying to learn new things and all of a sudden you get suspended and jump in," Clarkson said. "I think I (injured) my foot right away and then my elbow. It was just one of those seasons that I chalk up as a nightmare and (I got) through it and got ready and trained hard this summer and spent time with my kids and got ready for this year."

Carlyle praised Clarkson for putting time and effort into building up strength and getting "a little thicker" in the off-season. Even after a lower-body injury limited him at training camp and the facial fractures halted his progress, Clarkson managed to be in the lineup on opening night and got on track.

Nine games in, Clarkson doesn't have a single fighting major after leading the team in the category last season. That's because his facial injuries prevent him from dropping the gloves.

Carlyle said it would be foolish for Clarkson not to be over-cautious about his face because "those are the types of injuries that one little bump again can set him back."

Still, Clarkson is hoping to get back to fighting sooner than later.

In Thursday's practice, Clarkson ditched the full shield in favour of a regular visor and hopes he can convince doctors to let him begin the transition in a game, be it Friday at Columbus, Saturday against the Chicago Blackhawks or next week against Phoenix or Colorado.

"I don't think I'm allowed yet," Clarkson said. "I had something done the other day and I still have some things going on. I'm trying to find a way that I could wear maybe a bigger visor — a SWAT team shield — something that is off of my face a little bit because I'm having a hard time with this one."

Clarkson said the full shield was an improvement from the cage. Problems arise when it fogs up and forces him to look through tiny holes in the mask.

"It's just tough when the puck's down low in your feet or when you're going for things," Clarkson said. "But it was either that option or I didn't play."

After his problems last year, not playing wasn't an option for Clarkson, who couldn't help but worry about the lingering effect of another injury.

"When I found out what was wrong, it's tough to swallow," he said. "It kind of puts you in a place where you start to think. For me personally that wasn't fun, but I made a decision to come back and play and I feel pretty good. The bone's healing, so I'm just waiting for the doctors to clear me to get back to normal."

Back to normal for Clarkson, in his mind, also includes a return to some fisticuffs. Without Colton Orr or Frazer McLaren, the Leafs don't have an enforcer, and according to HockeyFights.com, their two fighting majors are tied for the second-fewest in the NHL.

Clarkson still feels a desire to take exception to hits on himself and teammates but in the back of his mind understands with a full shield he can't do everything. Once he sheds it for good, it's his plan to continue his fighting ways.

"I don't plan on changing," Clarkson said. "At the end of the day I'm going to go back to fighting and doing the things I've always done."

Notes: Forward David Booth skated Thursday for the first time since fracturing his right foot while blocking a shot in a pre-season game. Carlyle said Booth is working hard but is still "a long ways away" from making his regular-season debut. ... The Leafs have recalled Stuart Percy from the AHL's Marlies. It wasn't immediately clear if an injury necessitated the call-up or if Percy was just going to be the seventh defenceman in Columbus.