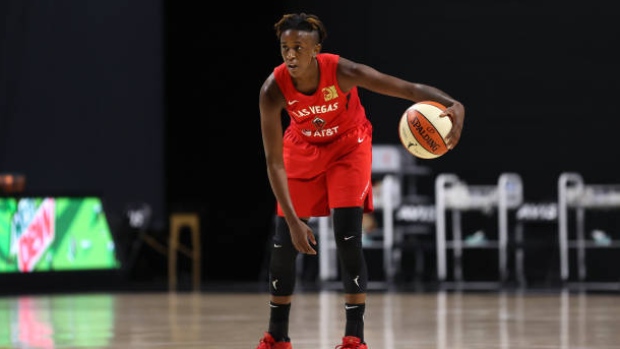 BRADENTON, Fla. — A’ja Wilson and Dearica Hamby each scored 23 points and the Las Vegas Aces secured the top seed in the playoffs with an 86-84 win over the Seattle Storm on Sunday.

Each team finished at 18-4 but the Aces won both regular season contests against the Storm.

Both squads entered Sunday's season finale having secured double-byes into the semifinals. Seattle played without forward Breanna Stewart and point guard Sue Bird, who were held out due to injury.

Jewell Loyd's jump shot with 5:11 left put the Storm up 79-74. Kayla McBride followed with a 3-pointer 17 seconds later, Hamby recorded a three-point play and Las Vegas led the rest of the way.

Ahead by two with 0.3 seconds left, Las Vegas' Danielle Robinson missed a pair of free throws — the second intentionally — with the hope of forcing the Storm into a desperation heave. But Robinson left the free throw line early and was called for a lane violation. It allowed the Storm to set a play on a side out, but the ball was deflected on the entry pass and time expired.

Loyd led the Storm with 30 points.