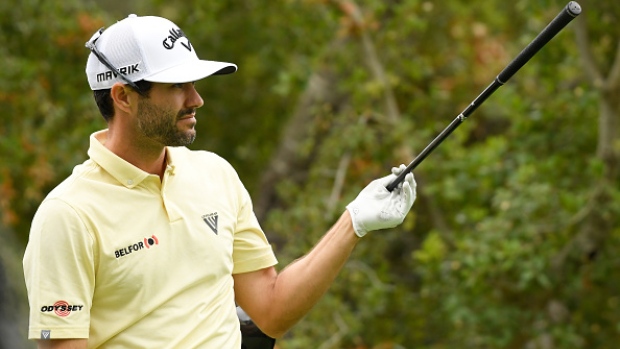 As far as the scorecard goes, the third round of the Zozo Championship wasn’t a particularly unforgettable one for Adam Hadwin. But any time you play with Tiger Woods, it is memorable.

This is the second time in his career that the Canadian has been paired with Woods. The first occasion was last year at the Genesis Open. That was in front of a large throng of fans.

This time out, the only gallery came from a few people watching from their backyards.

"It was totally different," said Hadwin of the experience. "A lot quieter."

This time around, however, Hadwin felt more comfortable not only because of the lack of galleries, but due to last year’s Presidents Cup.

"We got to know each other a little better down there. It was more relaxed this time."

He described the banter between the he and Woods as nothing out of the ordinary. Both golfers are baseball fans so much of the chatter was about the World Series, with Woods being an ardent Dodgers supporter.

"He’s a pretty chill guy," said Hadwin. "It was a relaxed round, nothing out of the ordinary really."

Part of that could have been because neither player would have been considered in contention at the start of the day. They were 12 shots back and unlikely to make up much ground against a field that was making birdies by the bucketful.

Hadwin made five birdies along with three bogeys on his day, posting a two-under 70. That left him tied for 64th.

"I’m not taking advantage of the par fives," said Hadwin of his game play. "I think I’m only two under and that’s not that good this week."

The Abbotsford, B.C., product is playing his third consecutive week and will take next week off. He has yet to decide whether he’ll play at the Houston Open or add an additional week off before playing the Masters.

Since the restart of the Tour after the pause for the pandemic, Hadwin has missed just one cut in 12 starts. However aside from a tie for fourth at the Rocket Mortgage Classic, his best finish is a tie for 34th.

In the last two majors, Hadwin ended up T58 at the PGA Championship and 54th at the U.S. Open. This will be his third appearance at the Masters.

This three-week stretch was also the first time he and his wife have been on the road with their daughter, Maddox. Their dog is also alongside and it’s been an adjustment living in a hotel.

"Overall it’s been pretty good," said Hadwin, who credited his wife, Jessica, for doing most of the work. "But it will be nice to get home and have more than one or two rooms for everyone."