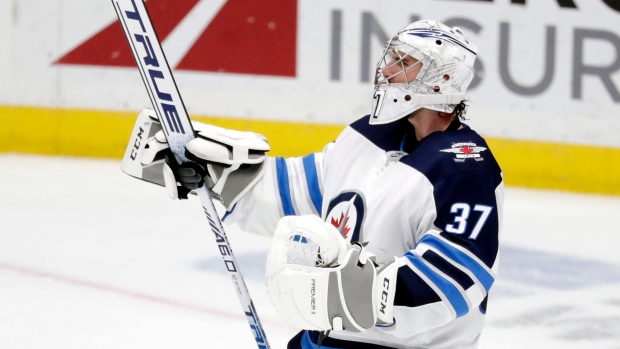 Winnipeg Jets forward Adam Lowry believes they wouldn't be in a playoff spot without the play of All-Star goalie Connor Hellebuyck this season.

"Helley [Hellebuyck] was so good for us this year up until the pause that I’d say there were a lot of games where we might of not had a great start, he makes two or three great saves to give us a chance to wake up and keep us in the game where as if he’s not on top of his game we could be down two or three goals early," Lowry told TSN's Sara Orlesky.

Tuesday's Jets rewind game features a clash against the Anaheim Ducks from December 8, 2019. Watch it a 7pm CT on TSN3 in the Jets region.

Lowry says Hellebuyck has been such a big factor in Winnipeg's success this season that he should not only be awarded the Vezina Trophy as the league's best goalie, but should also be considered for the Most Valuable Player award.

"You look at [Tuukka] Rask and the season he’s had, but you look at the bulk of the work that Helley’s had. Some nights we give up a lot of quality chances," Lowry said. "I think by far and away he should be the winner of that [Vezina Trophy]. He’s such an important piece to our team. I think he should be in the conversation for the Hart [Memorial Trophy]. You look at most valuable players and what they mean to their team without Helley and our goaltending tandem, I don’t think we’re sitting in the playoff spot."

Winnipeg sit fourth in the Central Division and hold the first Wild Card spot in the Western Conference with a 37-28-6 record through 71 games.

Hellebuyck, a 27-year-old American, has a 31-21-5 record with a 2.57 goals-against average and a .922 save percentage with six shutouts over 58 games this season, his fifth in Winnipeg.