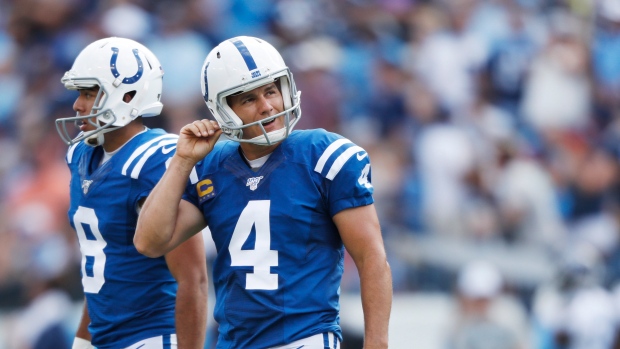 NASHVILLE — The Indianapolis Colts already have had one surprise retirement thanks to Andrew Luck deciding to step away. If the NFL's oldest player and career scoring leader keeps missing the uprights, Luck might not be the only player put on the reserve/retired list this year.

Adam Vinatieri continued his struggling start to his 24th season Sunday, missing not one but two extra points in a 19-17 win over the Tennessee Titans. Only the Titans failing to convert on fourth-and-2 at the Indianapolis 45 in the final seconds kept Tennessee from at least attempting a field goal to cost the Colts their first win.

The 46-year-old Vinatieri didn't talk after the game with his locker empty quickly.

"I have zero concern," Reich said. "I mean, he hit the upright on the one. You probably saw the first one. It was not a good operation. The snap and hold was not clean. I've held for kicks. The ball was barely on the ground, it was not clean. ... Zero concern."

"Yeah, it's a concern," Irsay told The Indianapolis Star. "We'll talk and try to take emotion out of big decisions."

Vinatieri struggled in the Colts' overtime loss to the Chargers in the opener, missing his first extra point of the season to the right. Then he missed his first field goal attempt left, and he pulled a 29-yarder to the left in the second half. That was the first time that Vinatieri had missed two field goals and an extra point in the same game and only the seventh time he had missed a field goal inside 30 yards.

Against the Titans (1-1), Vinatieri hit his first extra point for a 7-0 lead in the first quarter. He missed on his second extra point midway through the second quarter after Jacoby Brissett's second touchdown pass of the game. That left the Colts with a 13-7 lead.

Vinatieri missed his second extra point with 4:38 left after Brissett had capped a 69-yard drive with a 4-yard TD pass to T.Y. Hilton, leaving the Colts ahead only 19-17. Vinatieri's kick clanked off the right upright, and the kicker bent over before walking back to the sideline.

The Titans had kicking woes of their own, with Cairo Santos, signed to fill in until veteran Ryan Succop heals up enough to come off injured reserve, missing a 45-yarder in the fourth quarter. But Santos now is with his sixth different NFL team.

Vinatieri is a four-time Super Bowl champ and three-time All-Pro kicker in his 24th season. He made every extra point he tried in 13 of those seasons and never missed more than three in any previous season.

Now the kicker who turns 47 on Dec. 28 is just 2 of 5 on extra points and 1 of 3 on field goals through the first two games. Clearly not the standard Vinatieri has set for himself.