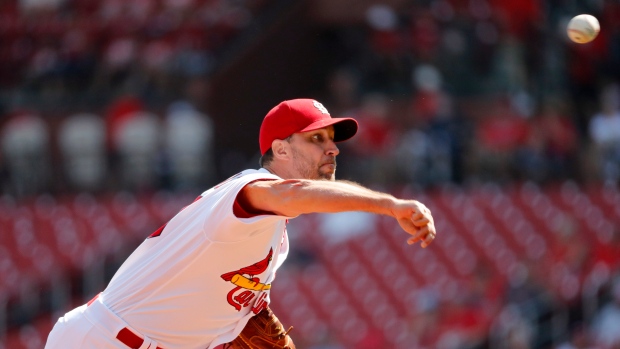 ST. LOUIS — Adam Wainwright has pitched in his share of big games throughout a distinguished career. Taking the mound against an ace in a matchup with post-season implications, he delivered once more.

"As far as competing, that's every guy's dream right there, competing against the best in this kind of atmosphere in September down the stretch. That's the kind of stuff I live for," he said.

Wainwright (13-9) has won all four of his starts this month, allowing just one earned run in 27 innings. The 38-year-old righty limited the Nationals to an unearned run in seven innings.

"It's just sort of simplifying and figuring out exactly who I needed to be," Wainwright said. "I've been searching for that correct mix all year, and now I'm really trying to read hitters and just only focusing on executing pitches."

Trailing by four, the Nationals put two on with one out in the eighth. Asdrúbal Cabrera hit a drive off Andrew Miller that had the distance to leave the park, but Fowler jumped and reached far over the wall to make the grab.

Fowler had started the game in centre field but moved to right when Harrison Bader stayed in the game after pinch-running for Matt Carpenter in the fifth inning.

"I did hoop," Fowler said. "I thought those days were over, but I guess Asdrúbal drew me out again."

Tommy Edman and Matt Wieters homered for St. Louis, which began the day with a two-game division lead over Chicago and Milwaukee. The Cardinals play the Cubs seven times in their final 10 games, beginning with a four-game series at Wrigley Field that starts Thursday night.

The Nationals started the day with a 1 1/2-game lead over the Cubs and Brewers in the NL wild-card race. Washington has lost nine of its last 14, and is 1-2 under bench coach Chip Hale, filling in since manager Dave Martinez had a heart procedure this week.

"It's frustrating," Hale said. "We know we're in the fight. Max was throwing great. He had his good stuff today, he felt good, felt good late into the game."

Scherzer (10-7), who was born and raised in the St. Louis area, had not permitted an earned run in 17 2/3 innings at Busch Stadium dating to 2015 until Edman hit a solo homer in the third. It was the rookie's 10th home run this season, including a team-high five this month.

Scherzer gave up five runs in 6 2/3 innings. He left after Edman hit an RBI single for a 3-1 lead and Wieters followed with a pinch-hit homer.

Wieters batted for Wainwright and connected for the first pinch-hit homer of his career — he hadn't played since leaving a game Aug. 31 with a left calf strain.

Scherzer struck out 11, but fell to 1-2 in five starts since coming off the injured list with a strained back.

Wainwright gave up eight hits, struck out three and walked one.

Carlos Martínez got four outs for his 21st save in 24 chances. The Cardinals used three relievers in the eighth.

Paul DeJong drove in Harrison Bader with a swinging bunt to first base in the fifth inning to expand the St. Louis lead to 2-0. Bader ran for Carpenter, who hit a leadoff double and advanced on Yadier Molina's sacrifice bunt.

Trea Turner hit an RBI double for Washington in the seventh.

Molina made his 1,938th career appearance at catcher, tying him with Brad Ausmus for seventh all-time in major league history.

Howie Kendrick appeared to hit into an inning-ending double play in the sixth inning. The Nationals challenged the ruling that Kendrick was out at first while the Cardinals challenged that Juan Soto interfered with Kolten Wong trying to turn the double play at second base. The call on Kendrick was overturned, while the call at second base stood in a challenge that took 3 minutes, 16 seconds to sort through.

Edman's drive gave St. Louis 10 players with at least 10 home runs for the first time in franchise history. The Cardinals had nine hitters reach double figures in 2000 and 2016.

Nationals: 1B Matt Adams (shoulder) took some swings in the batting cage for the first time since leaving Washington's Sept. 12 game at Minnesota with a sprained left AC joint.