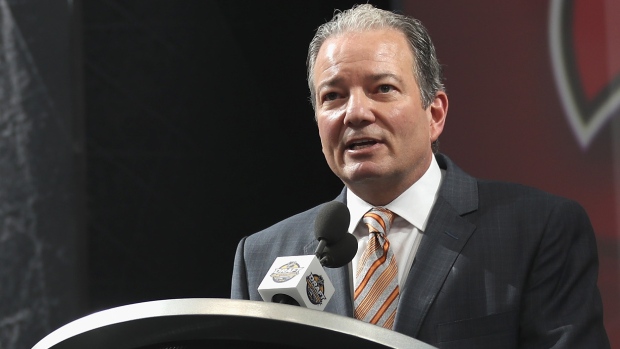 The New Jersey Devils are owned by Joshua Harris, the same Joshua Harris who owns the Philadelphia 76ers – the basketball franchise that placed such an emphasis on losing that it required NBA intervention to break out of tank mode.

Despite that, Devils general manager Ray Shero swears his team isn’t tanking. It has just been an ugly run in New Jersey.

“We have some talented players coming, but we need more.”

The Devils happen to be plummeting in the standings at the best possible time, dropping 10 straight games (0-8-2) since Feb. 19. New Jersey has been shut out three times in that span, outscored by a 33-19 margin, and dropped back-to-back games last weekend to Arizona and Colorado – the only two teams below them in the standings.

As a result, the Devils have slid from 22nd to 28th place – more than doubling their odds of landing the No. 1 overall pick in April’s draft lottery from 4.5 per cent to 10.3 per cent.

The one problem for the Devils - or any other team interested in improving their odds – is that tanking has been slightly disincentivized this year with the addition of the Vegas Golden Knights.

The Golden Knights are guaranteed lottery odds equal to the 28th-place finisher in the standings, decreasing the probability for the No. 1 pick for every non-playoff team, including the team that finishes last.

Last spring, the Toronto Maple Leafs had a 20 per cent shot at Auston Matthews by virtue of their 30th-place finish.

This year, the Colorado Avalanche – who are barely on track to break 50 points with one of the worst regular seasons in the last 20 years – would have a 17.9 per cent shot at No. 1 overall, according to calculations from HockeyViz.com.

Most of the other teams will experience a one per cent drop in odds.

The fact that Nolan Patrick and Nico Hischier – the two players battling it out to be No. 1 – aren’t expected to make the same immediate impact as Matthews has also kept teams focused on closing out the season in a winning fashion.

Outside of the Panthers, who are falling out of the playoff race with an 0-4-1 run since March 1, only the Detroit Red Wings, with one win in six games, have struggled as much as the Devils.

New Jersey sold off Kyle Quincey and P.A. Parenteau at the deadline; Detroit traded away Thomas Vanek, Brendan Smith and Steve Ott. Even if the odds aren’t appreciably increasing for No. 1 overall, the Devils and Wings have a combined 21 picks in this year’s draft to try and better position themselves.

Other teams around New Jersey and Detroit have kept winning. The Canucks, Hurricanes and Sabres have all earned at least five points in their last six games.

Piling up the wins now has only increased the misery in Vancouver, Carolina, Buffalo, Winnipeg and Philadelphia.

Here are the odds for this year’s draft lottery as compared to 2016:

Probability of selecting No.1 overall