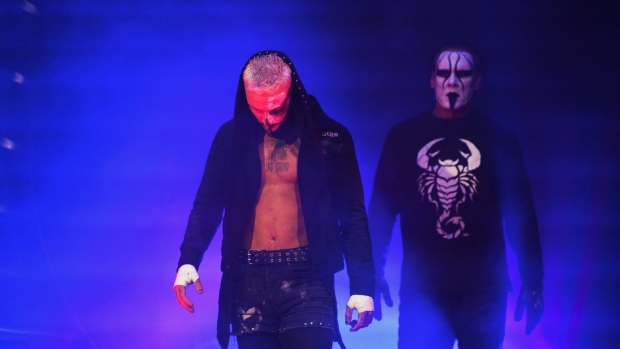 After weeks of feuding, Darby Allin and Andrade El Idolo finally meet one-on-one. Plus, FTR takes on the Gunn Club and The Bunny faces off against a debuting talent in an Owen Hart Foundation Women’s Tournament qualifier. You can catch AEW Dynamite LIVE at 8pm et/5pm pt on TSN2, streaming on TSN Direct and on TSN.ca.

Darby Allin (w/ Sting) vs. Andrade El Idolo (w/ Jose the Assistant) - It started innocently enough. Andrade El Idolo simply wanted to "buy that little boy" from Sting in early 2022. That "little boy" was, of course, Darby Allin and he was not for sale. Andrade's disappointment in his inability to, uh, buy Darby Allin led him to lash out. During a TNT Championship match against then title holder Sammy Guevara on the Feb. 16 edition of Dynamite, Andrade laid out Allin and cost him the chance to become TNT Champion for a second time. Since then, Allin and Andrade have done battle in trios and three-way matches, but have yet to meet in a singles contest. That all changes on Wednesday night. Allin heads into the match 7-3 in his last 10 singles matches with those losses coming to Guevara, MJF and CM Punk. Andrade is 8-2 in his last 10 singles matches, with one of those losses also coming in a TNT Championship match against Guevara. While there's no title on the line on Wednesday night, both men are just as eager for a victory, fuelled by a mutual dislike and pride. Will Allin pick up the victory and get back into title contention or will Andrade grab the win as he starts a new march towards gold?

FTR (Dax Harwood and Cash Wheeler) vs. Gunn Club (Austin Gunn and Colten Gunn) (w/ Billy Gunn) - We've witnessed a new FTR over the past several weeks. It started with the firing of manager Tully Blanchard with Dax Harwood and Cash Wheeler vowing that family was more important than championships. The duo once again ran into old rivals the Young Bucks with Matt Jackson and Nick Jackson taunting FTR about their split with Blanchard. On last week's Dynamite, Harwood came out on the losing end of a hard-fought battle with CM Punk. Throughout the match, Austin Gunn and Colten Gunn, who were sitting in the front row, taunted Harwood and Wheeler and mocked them about the loss. FTR had just about enough of that and challenged the duo to this match on Wednesday night in what will be the Gunn Club's biggest test to date in AEW. A motivated FTR is a scary proposition for any tag team in AEW and will give the Gunn brothers all they can handle. And what about The Pinnacle? MJF made it clear last week that the faction is still in tact, even with the defection of Wardlow. Yet we haven't seen FTR with MJF or Shawn Spears over the past while. It appears that there are some fissures in unity. Will that come into play on Wednesday?

Owen Hart Foundation Cup qualifying match: The Bunny (w/ The Blade) vs. ? - In a match to earn a spot in the inaugural Owen Hart Foundation Cup, The Bunny goes up against...well, we don't know who, actually. AEW president Tony Khan announced that her opponent will be a newcomer to the promotion who will also sign her contract on Wednesday night. The person in question will join the likes of Keith Lee and Shane "Swerve" Strickland as high-profile additions to the AEW roster. Of course, this means The Bunny can't really do anything to specifically prepare for an opponent whose identity is a mystery. But who could it be? There's no shortage of quality free-agent talent right now and many would be great additions to the AEW women's division. Just who might be stepping into the ring with The Bunny on Wednesday night?

CM Punk vs. "Platinum" Max Caster (w/ Anthony Bowens) - In a match signed early on Wednesday afternoon, CM Punk is in action for a second straight Dynamite and will again be taking on another tag-team specialist in Max Caster. Punk is coming off his victory over Dax Harwood in what was a very well-received match last week. Never afraid of competition, taking on Punk will be a big ask for the brash Caster, but he certainly believes he's up to the challenge. The lone blemish on Punk's AEW record was the loss to MJF on the Feb. 2 Dynamite, one that he avenged in the Dog Collar Match at the Revolution pay-per-view earlier this month. Caster is 3-2 in his last five singles matches in AEW and might be able to take advantage of a Punk who could be looking beyond him. After defeating Harwood last week, Punk made a noose gesture and then gestured to his waist, very clearly indicating that he was coming for "Hangman" Adam Page and his AEW World Championship. With Page on his mind, Punk would be wise not to overlook the task ahead of him in Caster.