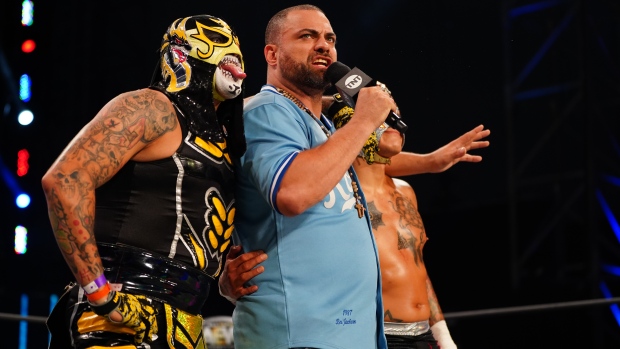 After becoming the first team to defeat the Young Bucks in over a year last week, Eddie Kingston and Penta El Zero Miedo get a shot at their AEW World Tag Team Championship at AEW Road Rage live from Miami. ​You can catch AEW Dynamite LIVE at 8pm et/5pm pt on TSN2, the TSN app, streaming on TSN Direct and on TSN.ca.

AEW World Tag Team Championship match: The Young Bucks (Nick Jackson and Matt Jackson) (c) (w/ Don Callis and Brandon Cutler) vs. Eddie Kingston and Penta El Zero Miedo (w/ Alex Abrahantes) - February 29, 2020 - that was the last time the Young Bucks lost a tag match. Prior to last week, that is. During last Wednesday night's World Tag Team Title Eliminator match, Nick took the Fear Factor from Penta and ate a Huracan from Kingston and was pinned, setting up the rematch for the titles. Now Kingston and Penta will look to do what the Varsity Blonds, SCU, Death Triangle, Santana and Ortiz, Chris Jericho and MJF and the Acclaimed couldn't and take the straps from the Jacksons. But how will the champions respond from last week's loss? Their attempt to get the Good Brothers and Cutler to interfere backfired and Frankie Kazarian came down to even the odds for Kingston and Penta. Can they get the job done themselves or will they rely on help from other members of The Elite?

South Beach strap match: "The American Nightmare" Cody Rhodes (w/ Arn Anderson) vs. QT Marshall (w/ The Factory) - Former friends do battle in a match that has the potential to get brutal. The bad blood runs deeps between Rhodes and Marshall after the latter's betrayal of the Nightmare Family and formation of the Factory and it wasn't settled by a previous one-on-one match on the Apr. 22 Dynamite when Rhodes got the pinfall victory. In a strap match, the rules are pretty straightforward. The two men will be tied together with a 10-foot leather strap. That strap can be used to attack your opponent. The winner of the match will be the man who is first to touch all four turnbuckles in succession. It sounds easy, but rest assured, it's difficult in execution and there is the added factor of simmering hatred between Rhodes and Marshall, so the desire to inflict pain on his opponent might override each man's desire to actually win the match.

Trios match: Inner Circle (Jake Hager, Santana and Ortiz) (w/ Konnan) vs. The Pinnacle (Wardlow, Cash Wheeler and Dax Harwood) (w/ Tully Blanchard) - After MJF and Sammy Guevara's epic encounter last week, the latest chapter in the war between these two factions plays out in a six-man match. The match will give Santana and Ortiz their first opportunities to get their hands on FTR after they jumped their mentor, Konnan, on Dynamite two weeks ago. Hager and Wardlow are, of course, no strangers to each other with Inner Circle's "Bigg Hoss" defeating Wardlow in an MMA rules cage fight at the beginning of June. Outside of Blood and Guts and Stadium Stampede, this will mark the first time that Proud-N-Powerful and FTR have met in an AEW ring as we inch closer to their eventual tag-team grudge match. Who will win the latest battle between these two heated rivals?

Andrade El Idolo vs. Matt Sydal - A champion everywhere he's wrestled before, Andrade makes his highly anticipated in-ring debut for AEW on Wednesday night against one of the company's cagiest veterans and best high-flyers in Sydal. Andrade has a bone to pick with Sydal over interrupting his major announcement a couple of weeks back. Andrade says he has his sights set on both Kenny Omega and Miro and their respective titles, but before he can make a charge on those, he'll have to get through Sydal. While both men have worked in the same promotions over the years, the two have never crossed paths in any kind of a match prior to Wednesday night. Will Andrade stake his claim in the singles division or will Sydal give the former La Sombra an unhappy introduction to AEW?