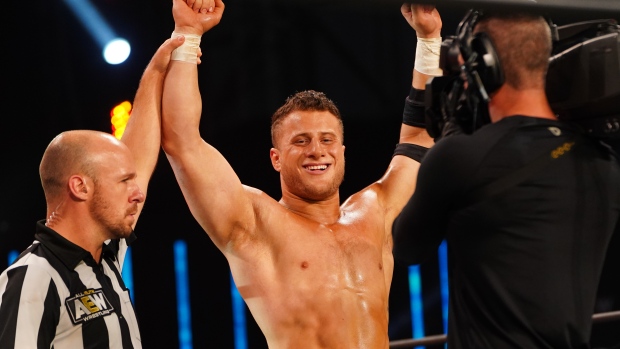 One of the most highly anticipated grudge matches in AEW's short history headlines Dynamite as it returns to its regular timeslot when The Pinnacle's Maxwell Jacob Friedman meets Sammy Guevara of the Inner Circle. You can catch AEW Dynamite at 8pm et/5pm pt on TSN2, the TSN app, streaming on TSN Direct and on TSN.ca.

Maxwell Jacob Friedman vs. Sammy Guevara - This is a match that has been literally months in the making and it might not be a pretty one. When MJF began his plan to infiltrate the Inner Circle last fall, one of his first orders of business was to attempt to get the other members of the faction to turn against Sammy Guevara. His plan to ostracize one of the charter members of the group worked to perfection when Guevara felt no other recourse than to quit the Inner Circle when the rest of his crew wouldn't open their eyes to Friedman's perfidy. Eventually, Guevara would return to the group with proof of MJF's deception, but that came on the very same night that Friedman revealed it himself and introduced The Pinnacle. Since then, the two factions have been at war for months through both a Blood and Guts and a Stadium Stampede match, but Friedman and MJF have never met one on one at any point during their careers. Guevara has not tasted defeat in a singles match since November of last year, while MJF insists that he remains undefeated in AEW singles matches (of course, the loss to Jon Moxley at last year's All Out indicates otherwise). Either way, a lengthy winning streak is set to fall on Wednesday night, but doing damage to the other man might be more important for Guevara and MJF than any win or loss.

TNT Championship match: "God's Favourite Champion" Miro (c) vs. Brian Pillman Jr. (w/ Griff Garrison and Julia Hart) - Brian Pillman Jr. steps into the ring for the biggest match of his AEW career, thus far, when he takes on the undefeated Miro for his TNT title. The genesis of this match came on the June 11 edition of Dynamite when Penelope Ford defeated the Varsity Blonds' cheerleader, Julia Hart, in singles action. Miro, the former best friend of Ford's husband Kip Sabian (who Miro put on the shelf with a vicious beating), made his way down to the ring following the match to "protect" Ford from the numbers game. In reality, Miro just wanted to beat somebody up and, after jumping Griff Garrison, he came to blows with Pillman, who wouldn't back down. The challenge was made and accepted last week and now Pillman Jr. looks to become the first man to defeat Miro in AEW. Will Miro continue to roll along or will we see a fifth man become TNT Champion?

AEW World Tag Team Title Eliminator match: AEW World Tag Team Champions The Young Bucks (Nick Jackson and Matt Jackson) (w/ Don Callis and Brandon Cutler) vs. Eddie Kingston and Penta El Zero M (w/ Alex Abrahantes) - Eddie Kingston and Penta can set themselves up as the new No. 1 contenders to the Jacksons' AEW World Tag Team Championships...if they can beat the Young Bucks on Wednesday. The feud between the two teams has become more than personal with Nick and Matt injuring a number of Penta and Kingston's allies in Jon Moxley, Rey Fenix and PAC. The teams have been engaged in a bitter rivalry for weeks, but the Bucks never seem to be alone with Elite stablemates the Good Brothers (Doc Gallows and Karl Anderson) or Kenny Omega coming to their aid. Kingston and Moxley failed to defeat the Bucks for the titles at Double or Nothing when Moxley fell victim to a series of brutal BTE Triggers, but with a win on Wednesday, Kingston can get another shot at those titles. Can Eddie and Penta emerge victorious or will the Jacksons manage to weasel their way out of this one, too?

AEW Women's World Champion Dr. Britt Baker, DMD and Rebel (not Reba) vs. "The Native Beast" Nyla Rose and Vickie Guerrero - If the main course is Britt Baker's title defence against Nyla Rose at Night 2 of Fyter Fest on July 21 is the main course, then Wednesday night's match is the amuse-bouche...but fair warning, it might not be a good one. Rebel's experience in the ring is limited, while Vickie isn't a wrestler at all. If you're expecting a mat classic on Dynamite, you're probably not going to find it. The key to this matchup is the rivalry between the champion and the challenger. Rose is no stranger to the AEW Women's World Championship, having held the title for 101 days last year. She's looking to become the first ever two-time champion and will see Wednesday as her opportunity to soften up Baker before the title match in three weeks' time. Will Rose's team strike the first blow or will Baker's side show resolve against the challenger?

Jungle Boy (w/ Luchasaurus and Marko Stunt) vs. Jack Evans (w/ Matt Hardy and Angelico) - Less than a week after coming up short in the biggest match of his life, Jungle Boy returns to action on Dynamite. While Jack Perry didn't manage to defeat Kenny Omega for his AEW World Championship, he managed to give "The Cleaner" everything he could handle in one of the best TV matches of the year last Saturday. In order to get another shot at Omega, Jungle Boy knows that he's gotta go up the ladder again and that starts against Evans on Wednesday. One half of The Hybrid 2, Evans is no stranger to Perry. The duo met on the Mar. 29 edition of AEW Dark: Elevation with Jungle Boy emerging victorious. Can Jungle Boy make it two in a row over Evans or will Evans make it two straight losses for Perry?

- "Le Champion" Chris Jericho sits in with the commentary team