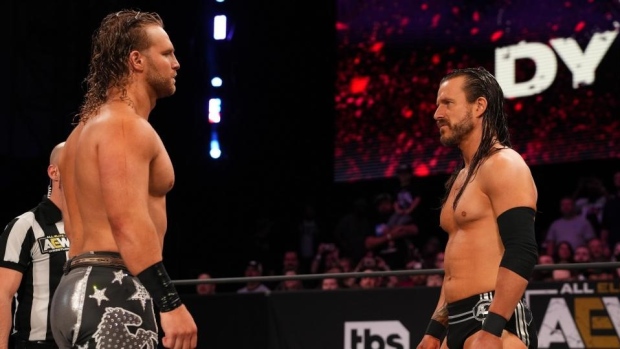 "Hangman" Adam Page will once again put his AEW World Championship on the line against Adam Cole, but this time in a Texas Death Match. Plus, the Blackpool Combat Club is in trios action against the Gunn Club and Ruby Soho takes on Robyn Renegade in an Owen Hart Foundation Cup qualifier. You can catch AEW Rampage LIVE on Friday at a special time of 7pm et/4pm pt streaming on TSN Direct and on TSN.ca.

Texas Death Match for the AEW World Championship: "Hangman" Adam Page (c) vs. Adam Cole - Even after being defeated by "Hangman" Adam Page at Revolution, Adam Cole has been undeterred in his quest to become AEW World Champion and has continued to needle at and assail Page. Well, perhaps Cole should be careful for what he wished for because on Friday night, he'll get one more shot at Page, but this time in a Texas Death Match. Page has become well-versed in the Texas Death Match in recent months, defeating "The Murderhawk Monster" Lance Archer in such a match on the Feb. 9 edition of Dynamite. A bloody spectacle of a match, Page is well aware that's what Friday night's bout is also likely to entail and it's something that Cole will have to gird himself for if he wants to become AEW World Champion. The pressure will be on Cole following a string of disappointing results for his associates in recent weeks. The Young Bucks (Matt Jackson and Nick Jackson) came up short against FTR (Dax Harwood and Cash Wheeler) for the ROH and AAA World Tag Team Championships last week on Dynamite, while reDRagon (Bobby Fish and Kyle O'Reilly) fell to Jurassic Express (Jungle Boy and Luchasaurus) in their attempt to capture the AEW World Tag Team Championships this past Wednesday night. Can Cole stop the skid or will Hangman once again ride off as AEW World Champion?

Trios match: Blackpool Combat Club ("The American Dragon" Bryan Danielson, Jon Moxley and ROH Pure Champion Wheeler YUTA) (w/ William Regal) vs. Gunn Club (Billy Gunn, Austin Gunn and Colten Gunn) - Wheeler YUTA went through hell and back to prove his mettle to the Blackpool Combat Club. After last week's match on Rampage when he took everything Jon Moxley could dish out until finally succumbing to a bulldog choke, YUTA was told by Moxley that the hard work starts now. That work will begin with a trios match against a Gunn Club that is undefeated in them. As a unit, Billy Gunn and his sons, Austin Gunn and Colten Gunn, are 24-0 in trios competition in AEW. While nobody will doubt the skill and brutality of the Blackpool Combat Club, this will be the first time the group as wrestled as a trio. It begs the question of how much of an edge will the experience of the Gunn Club give them against Danielson, Mox and YUTA? YUTA will be looking to make a statement in this match and show his teammates that they made the right decision in letting him into the BCC. Which trio will emerge victorious?

Owen Hart Foundation Cup qualifier: Ruby Soho vs. Robyn Renegade - One woman will become the latest entrant into the Owen Hart Foundation Cup on Friday night when Ruby Soho meets Robyn Renegade. This will be Renegade's second appearance of 2022 on Rampage, having previously met Dr. Britt Baker, DMD in a losing effort in February. Soho has the obvious experience edge in this match, but will know full well not to look past Renegade. This will be the first singles encounter between the two women, but not the first meeting. On the Mar. 23 edition of Dark: Elevation, Soho teamed with Anna Jay to defeat Renegade and twin sister, Charlette Renegade, in tag-team action. Will Soho pick up another victory or will Renegade pull the major upset to advance to the Owen Hart Foundation Cup?