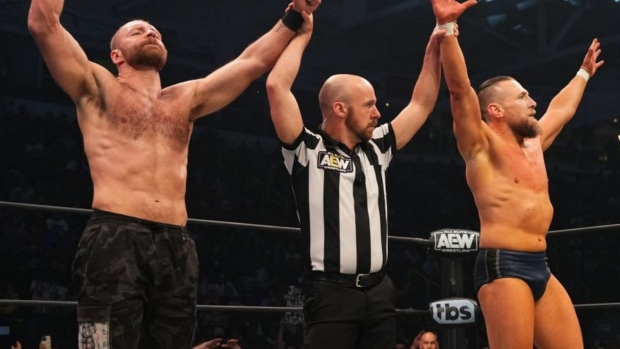 The Blackpool Combat Club's Jon Moxley and Bryan Danielson take on Matt Sydal and Dante Martin. Plus, Kris Statlander meets Red Velvet in an Owen Hart Foundation Cup first-round match and the House of Black faces off against Fuego del Sol and the Dark Order in a trios match. You can catch AEW Rampage at the special time of 7pm et/4pm pt streaming on TSN Direct and on TSN.ca.

Blackpool Combat Club (Jon Moxley and "The American Dragon" Bryan Danielson) (w/ William Regal) vs. Matt Sydal and Dante Martin - This match came about after a surprising challenge to Jon Moxley and Bryan Danielson from Matt Sydal and Dante Martin on Dynamite. The challenge came shortly after we saw some dissention in the ranks for the BCC team ahead of Double or Nothing. At the pay-per-view, Moxley and Danielson will team with Moxley's close friend Eddie Kingston, Santana and Ortiz against the Jericho Appreciation Society (Chris Jericho, Daniel Garcia, Jake Hager, Matt Menard and Angelo Parker) in an "Anarchy in the Arena" no-disqualification match. On Wednesday night, Jericho pointed out that Kingston and Danielson don't really like each other, which neither man denied, but things broke down into a shoving match between the two when Danielson stopped Kingston from going after the Jericho Appreciation Society on his own. Cooler heads prevailed, but the distrust between Danielson and Kingston remains evident. But before that match can go down, there is the matter of the match with Martin and Sydal, a team with far more experience working together than Danielson and Moxley have. Sydal and Martin were confident enough to make the challenge. Can they pull off the upset?

Owen Hart Foundation Cup first-round match: Kris Statlander vs. Red Velvet (w/ TBS Champion Jade Cargill and Kiera Hogan) - Former friends collide when Kris Statlander takes on Red Velvet for a spot in the Owen Hart semis against Ruby Soho. This was not the originally scheduled tournament match. Velvet booked her spot in the tournament with a win over Willow Nightingale and was set to take on Hikaru Shida, but Statlander was drafted in as an injury replacement. Statlander and Red Velvet had tagged together for a number of occasions in late 2021 and early 2022 before going their separate ways with Velvet aligning herself with the Baddies along with TBS Champion Jade Cargill and Kiera Hogan. This will be a first-ever meeting between the two women and it's an intriguing one because each woman would ostensibly at least have a pretty good idea of the other's strengths and weaknesses. Statlander enters the match at 7-1 in 2022 and a winner of four in a row, while Velvet's 2022 has seen significantly more ups than downs at 12-3 on the year. Which of these women will move on?

Trios match: The House of Black (Malakai Black, Brody King and Buddy Matthews) vs. Fuego del Sol and The Dark Order (Evil Uno and Preston "10" Vance) - Fuego del Sol is nothing if not persistent. Despite repeated beatings at the hands of the House of Black, he's back for more on Friday night with The Dark Order's Evil Uno and 10 in tow as backup. Fuego will be looking to defeat the House of Black for the first time after being handily defeated on the first two occasions and beaten down on two more for good measure. While Evil Uno and 10 are certainly nothing to sneeze at, the House of Black is a finely tuned machine right now. Since Buddy Matthews' arrival in AEW to join Malakai Black and Brody King, the House of Black has yet to taste defeat. But could the team of Fuego, Evil Uno and 10 catch them preoccupied with other matters? It's no secret that Black, King and Matthews' attention has been focused on their ongoing feud with Death Triangle (PAC, Penta Oscura and Rey Fenix). If their minds aren't on the task at hand, that could be just the opening that Fuego, Uno and 10 need. Which three men will emerge victorious?

-  After being asked by Maxwell Jacob Friedman to slay Wardlow ahead of their matchup at Double or Nothing, "The Chairman" Shawn Spears says he's become "The Giant Killer" and to prove his mettle, he intends to defeat a giant on Rampage

- Fresh off Scorpio Sky retaining the TNT Championship over Frankie Kazarian, we will hear from Men of the Year (Sky and Ethan Page) (w/Dan Lambert)