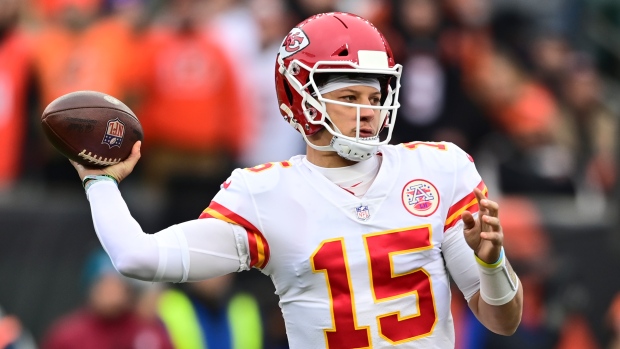 You ever get a good feeling about a team?

You wake up one morning and look at a team's odds to win the Super Bowl and think, "that number seems a bit long, let me jump on it."

That's how I felt one Monday morning in October when I saw the Indianapolis Colts were +3000 to represent the AFC in the Super Bowl.

And for a few weeks, that bet looked really good.

And then Jacksonville happened.

If you're like me and your favourite team has been eliminated, and you're looking to spice up the playoffs by backing a team, then you've come to the right place.

The AFC is wide open this season.

There are a lot of interesting storylines as we head into the postseason. Let's dive into the AFC playoff picture.

It was a slow start to the 2021 season for the Kansas City Chiefs, but here we are at playoff time and the Chiefs have the shortest odds of any AFC team to win the Super Bowl.

After an uncharacteristically bad 3-4 start, Kansas City rallied off eight-consecutive wins (including a 36-10 win over the Pittsburgh Steelers) and finished the season 12-5 with the No. 2 seed in the AFC.

They enter Sunday as 13-point favourites over the aforementioned Steelers.

Despite finishing the season 8-9 against the spread, the Chiefs were a perfect 4-0 straight up this season in games they were favourites by more than 10 points.

While quarterback Patrick Mahomes enters these playoffs with a ton of big-game experience, his star wideout, Tyreek Hill, could play a big factor down the stretch.

Hill appeared to injure his heel prior to the team’s Week 18 game against the Denver Broncos and was very limited, making just one catch.

If Hill is not at full strength, it could be tough for this Kansas City team to reach their third straight Super Bowl.

For the second season in a row, the Buffalo Bills are your AFC East champions.

Last year, they rode the momentum of their division title all the way to the AFC Championship game.

This season, the Bills will have to slay the dragon that is the New England Patriots on Wild Card Weekend if they want to keep their season alive.

After starting his career with three consecutive losses to the Patriots, quarterback Josh Allen has led his Bills squad to wins in three of the last four meetings against Bill Belichick.

In those four games he has thrown for eight touchdowns and just one interception, with 32 rushing attempts for 161 yards.

Last season the team made a big splash, bringing wide receiver Stefon Diggs into the fold.

It’s a move that has taken this team to the next level.

Diggs set career highs in receptions and receiving yards in 2020, and followed it up this season with a career-best 10 touchdowns.

The wideout caught a touchdown in nine games this season, with Buffalo going 7-2 in those games and just 4-4 when he was kept out of the endzone.

If Diggs and Allen can continue their connection in the playoffs, watch out for the Bills.

They’re the No.1 seed in the AFC, have a first-round bye, home field advantage, and could be getting the best running back in the league back for the playoffs.

Are oddsmakers sleeping on the Tennessee Titans?

Yup, that’s right. The No. 1 seed in the AFC has the third-longest odds of any team in the conference to win the Super Bowl, despite running back Derrick Henry on track to make his return to the lineup next week.

Henry went down with a foot injury during a Week 8 win over the Indianapolis Colts.

At the time, many people, including myself, wrote off this Titans team.

But what they’ve done since has been quite remarkable.

Without Henry, Tennessee won six of their final nine games to secure a bye to the divisional round.

If Henry is back in action, look for that to elevate the entire offence.

What a comeback season this has been for Joe Burrow and the Cincinnati Bengals.

Burrow’s 2020 season ended in Week 10 due to a knee injury, leading to a lot of questions in the off-season regarding the team’s No. 4 pick in the draft.

With a lot of people calling for the team to select offensive tackle Penei Sewell to help protect the team’s franchise quarterback, it was Cincinnati going a different route that perhaps led them to their first division title since 2015.

Chase was incredible this season, hauling in 81 catches for 1,455 yards and 13 touchdowns. His play this season has him as the odds-on favourite to win Offensive Rookie of the Year.

The Bengals open the playoffs with a matchup against the Las Vegas Raiders, a team they thumped 32-13 in Week 11, in a game that saw running back Joe Mixon steal the show with 123 rushing yards, and two touchdowns.

If they can win in the opening round it’s very likely they’ll be on the road for the remainder of the playoffs, somewhere the Bengals had success this season.

Cincinnati went 5-3 on the road this season (with one of the losses coming in Week 18 with starters sitting) and 6-2 against the spread on the road.

It’s been more than 30 years since the Bengals last won a playoff game. Can Joe Burrow and Ja'Marr Chase be X-factors and take this franchise to the next level?

This just isn’t cool. After 20 years of dominating the AFC, the New England Patriots were bad for one season and now they’re back.

Mac Jones looked solid this season, passing for 3,801 yards with 22 touchdowns and leading New England to a 10-win season.

However, history isn’t on the side of a rookie quarterback in the playoffs.

Since 2010 nine rookies have started under centre for teams in the playoffs, but only two of them (Russell Wilson [2012], T.J. Yates [2011]) advanced past their first game.

Jones also struggled in Week *16 when the Bills travelled to New England in a 33-21 Patriots loss where he passed for just 145 yards, no touchdowns and had two interceptions.

With a rookie quarterback in charge, and a team entering the playoffs 1-3 in their last four games, I’m avoiding the Patriots at all costs heading into the postseason.

For just the second time since 2002 the Raiders have made the playoffs.

Somehow, after a season full of distractions both on and off the field, this team managed to sneak into the playoffs, breaking the hearts of Los Angeles Chargers fans everywhere with an overtime win in Week 18.

Quarterback Derek Carr, after eight long seasons, will finally get a chance to play in the playoffs.

Unfortunately for Carr, his defence – which ranked sixth-last in points against this season – is set to take on a Bengals team in the first round that has been firing on all cylinders lately.

Fortunately for Carr, this team has shown the ability to win by any means necessary.

In Week 15 and 16 the Raiders scored a combined 33 points going 2-0 and held their opponents to just 27 points over the two weeks.

And in Week 18 they went punch for punch with the Chargers, outscoring them 35-32 on Sunday night.

However, against elite offences this team has really struggled.

They allowed a total of 89 points in two games against the Chiefs this season, allowed 33 to the Cowboys, 32 to the Bengals, and 27 to the Ravens.

On top of that, seven of their 10 wins came against teams that didn’t make the playoffs, and they went 3-3 against playoff teams.

Let’s do this one last time for Ben Roethlisberger.

Similar to Peyton Manning, it’s pretty clear that Roethlisberger has stayed in this league perhaps one year too many.

The value the 39-year-old adds with his experience and poise is evened out by his inability to make the big throws on a consistent basis anymore.

Roethlisberger from a few years ago against present-day Mahomes in the first round would’ve been electric stuff.

Let’s not forget, Roethlisberger threw for a career-high 5,129 yards in 2018, but a lot has changed since then.

As we enter 2022 I think it’s time to say goodbye to Roethlisberger as he and the Steelers’ miracle run to make the playoffs and then advance in the playoffs will come to an end on Sunday.