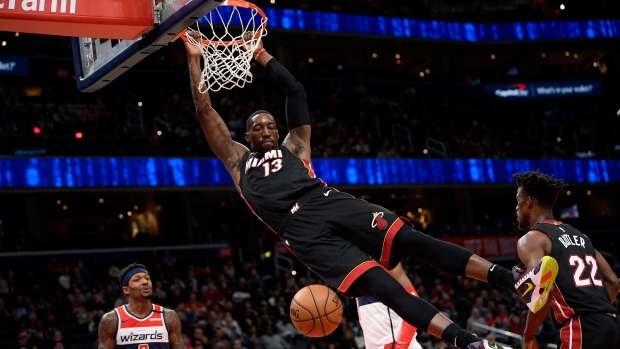 WASHINGTON — Jimmy Butler figures his bothersome left toe is not that big a deal, even if it forced him to the locker room for most of the second half Sunday night.

In the bigger scheme of things, Butler found it important that the Miami Heat erased a deficit and dominated down the stretch to end their four-game road losing streak as they try to make sure they get home-court advantage in the first round of the playoffs.

With Butler limited to nine points, zero assists and zero rebounds before exiting for good in the third quarter, the Heat took full advantage of Bam Adebayo's 27 points and 14 rebounds and used a 25-3 run to beat the Washington Wizards 100-89 on Sunday night.

"I couldn't move the way I wanted to move," Butler said. "I think we all have enough faith in each other, in this group of guys, to get it done, (even if) we're a man or two down. This was a big step in the right direction for us."

Butler left the game with 4 1/2 minutes remaining in the third quarter and did not return.

How big a deal is that? Butler leads the Heat in scoring and assists -- he went into Sunday averaging 20.5 points and 6.2 assists -- and is second on the team in rebounding at 6.8.

Duncan Robinson made a pair of 3-pointers late in that stretch by Miami that turned an 83-75 deficit into a 100-86 lead.

Robinson shot 7 for 11 on 3s and finished with 23 points. He's made at least one 3 in 49 consecutive games to equal a franchise record.

"This one definitely feels good," Robinson said about finally getting a win away from Miami. "We've had some quiet plane rides back home. Hopefully, this one is going to be more lively."

Miami's victory helped its playoff positioning; it is fourth in the Eastern Conference. Washington began the day ninth in the East but 4 1/2 games out of the eighth and last playoff spot.

Bradley Beal scored 23 points for the Wizards, ending his streak of 21 games in a row with at least 25. He shot 0 or 9 in the fourth quarter.

Shabazz Napier topped Washington with 27, and Davis Bertans scored 25, thanks mainly to a career-high eight 3s.

The game was tied at 72 entering the fourth, but the Heat steadily pulled away, as Washington managed only six points over the last 9 1/2 minutes.

"We just got stagnant. We've got to keep moving. I feel like, a lot of times, we were just kind of just watching me. We can't get caught up in doing that," said Beal, who is second in the NBA in scoring at 30.4 ppg. "They took away all my drives, everything pretty much toward the paint. They wanted to kind of force me to shoot jumpers all night."

Wizards first-round draft pick Rui Hachimura was 0 for 8 and scoreless; he is 0 for 14 over the past two games. He accepted a reporter's premise that perhaps he has hit the so-called "rookie wall." "I've got to take care of my body. ... Mentally, I have to get ready every game. Even practice," Hachimura said. "I'm thinking too much right now. Everybody says, 'Do this. Do this. Do this.'"

Adebayo donned a Beal jersey after the game, wearing it backward. Beal's written message was visible: "A real one! Keep grinding. Humble. Hungry." Said Adebayo: "It's great coming from a guy that's been in the league as long as him, one of the top scorers in the league. It's great to know you earned his respect and you just keep earning respect from guys like that."