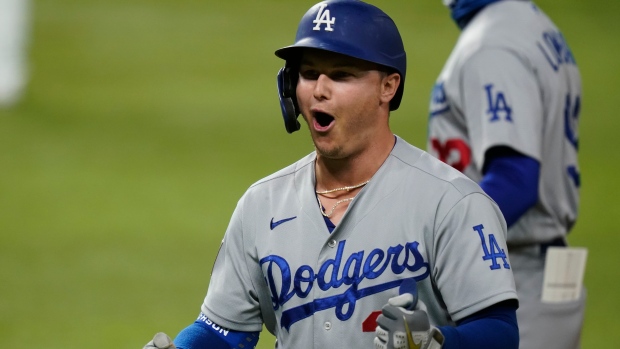 Joc Pederson is the guy the Los Angeles Dodgers didn’t need or want — until October.

After nearly being traded in February and hitting .190 during the regular season, Pederson is coming up big in the post-season.

Pederson crushed a fastball from Rays starter Tyler Glasnow over the left-centre field wall leading off the second inning Sunday night, extending LA's lead to 3-0. After enduring a stunning 8-7 loss in Game 4, the Dodgers rebounded early and went on to a 4-2 victory over Tampa Bay. Los Angeles is one win from its first World Series championship since 1988.

“They don't call it Joctober for no reason,” said teammate Max Muncy, who added a solo shot in the fifth. “The guy performs on the huge stage, that's just what he does.”

Pederson could tell his 428-foot drive immediately was gone.

“They don’t want that smoke,” he bellowed upon returning to the dugout. “Come on, let’s go!”

It was the Dodgers’ 28th home run of the post-season after leading the majors with 118 during the regular season.

Pederson struck out twice against Glasnow in Game 1.

“It was nice to be able to return the favour,” he said.

The left-handed slugger also homered in the Dodgers' losing efforts in the 2017 and 2018 World Series.

Pederson doesn't have a set spot in the Dodgers' loaded lineup because he struggles against left-handed pitching, but he's dangerous against right-handers and is making the most of his role. He started in left field in Games 1, 3 and 5 against the Rays. He pinch hit and stayed in to play the outfield in Game 2, and delivered a clutch pinch hit in Game 4 that drove in two runs to put Los Angeles ahead 6-5 in the seventh inning.

Pederson made a nifty running grab on a long fly by Joey Wendle and smacked into the wall for the second out of the seventh Sunday night.

“I saw it coming off the bat pretty well, got a good read on it and ran it down,” Pederson said. “It felt pretty simple.”

After the Dodgers shelled out big bucks to trade for Mookie Betts and David Price in February, they nearly traded Pederson to the rival Los Angeles Angels. But Angels owner Arte Moreno killed the deal that would have sent the 2015 All-Star and pitcher Ross Stripling to Anaheim.

“Definitely, it’s been a little bit of a roller coaster but you kind of got to adapt,” Pederson said. "It’s baseball and making the best of what I got in front of me."

Pederson struggled during the regular season, batting .190 with seven homers and 16 RBIs. He went on the paternity list in early September, returned for a stretch and then went on the family medical emergency list shortly thereafter.

Pederson began heating up in October. He's hitting .400 in the World Series, second on the team to red-hot Corey Seager, who's batting .471.

“I couldn’t be happier that he remained a Dodger,” Roberts said.