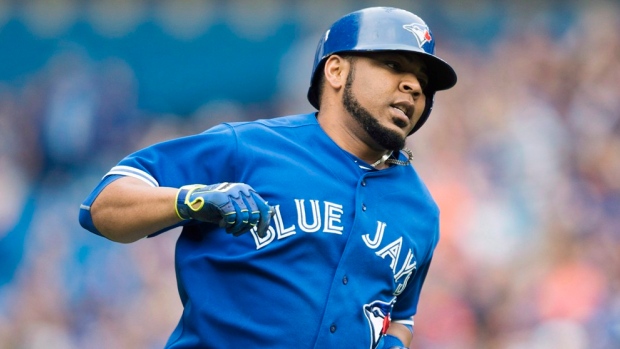 Paul Kinzer told TSN.ca he was with family at a Six Flags amusement park on Thursday night when he reached the deal with Cleveland.

“I was on the phone with Edwin [who is in the Dominican Republic], with Cleveland and with another team,” Kinzer said. “Edwin turned down quite a bit more money per year to play somewhere else. Cleveland has been involved since day one, but I didn’t know if they could pull it off. We were pretty much talking every day over the past eight to 10 days. Over the past few days, we’ve been talking a few times a day.”

Encarnacion turned down a four-year, $80-million contract offer from the Blue Jays earlier in the off-season. Sources tell TSN Kinzer countered that offer by asking the Jays for $100 million over four years.

“With the Blue Jays, this was all about timing and that was the only thing,” Kinzer said. “We weren’t upset with the offer or anything else. It was just timing.”

Kinzer said Encarnacion is looking forward to joining the Indians. He’s scheduled to take a physical next week. The final terms of Encarnacion’s deal, including a possible no-trade clause and the contract’s structure, are still being ironed out. At least $5 million of Encarnacion’s first-year salary will be paid as a signing bonus.

“Everything happens for a reason,” Kinzer said. “He’s with a great team who lost the World Series by a run. Now they get [their] second and third starters back [from injury], and he’s right in the middle of the batting order. He loves where he’s at right now.”

Kinzer said Encarnacion may wind up bringing home more money in three seasons with Cleveland than he would have in four years with the Blue Jays.

“It’s close,” he said. “Our guys ran the numbers last night. They were really close.”

Pro athletes in Toronto face paying a combined tax rate of 53.53 per cent based on the total number of days they spend in Canada, said Robert Raiola, an accountant in New York who works for pro athletes and teams.

In Cleveland, Raiola said the combined top rate is about 47 per cent. (The federal government takes 39.6 per cent of annual income, while Ohio takes 5 per cent and Cleveland has a 2 per cent tax, he said.)

“Those numbers are changing soon under Trump,” Raiola said. “He has talked about lowering the top federal rate to 33 per cent. That gap between Canada and the U.S. is only going to widen. I don’t know how Canadian teams are going to be able to compete for free agents without wildly overpaying.”

Kinzer represents numerous Latin American players. He has worked for Encarnacion for about 16 years.

“We started together when he was an 18-year-old in the minors,” said Kinzer, who also represents Blue Jays outfielder Ezequiel Carrera.

Encarnacion’s contract is the second-most-lucrative deal negotiated by Kinzer, behind a five-year, $75-million deal he landed for Chicago Cubs third baseman Amaris Ramirez in 2007.