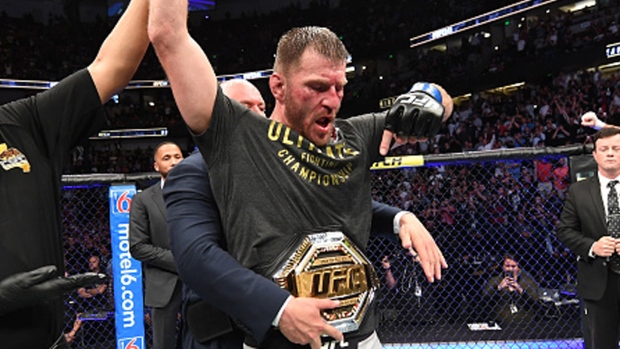 UFC Heavyweight champion Stipe Miocic has not fought since reclaiming his belt at UFC 241 last August with a fourth round TKO victory over Daniel Cormier and, according to his agent, there is no word on when we may see him make his Octagon return.

Miocic required surgery to repair a torn retina that he suffered due to accidental eye pokes in that main event victory and his agent Jim Walter told ESPN’s Marc Raimondi that the 37-year-old will not fight again until he has fully healed.

“Until we are 100 per cent confident -- or at least remotely confident -- his short- and long-term vision will be sustained, he will not be returning to competition,” Walter told ESPN.  “We have been working closely with a variety of medical professionals to help ensure that Mr. Miocic can return to competition -- whether it be in the Octagon or in the boxing ring."

There have been rumours of the UFC trying to put together a trilogy fight between Miocic and Cormier as they each hold a title winning victory over the other, however Walter states that the current champion would prefer to either face a fresh opponent in the Octagon or perhaps turn his attention towards the Sweet Science when he is ready to return to action.

"After his health is cleared, we hope to have Stipe back in competition this year in a fight that makes sense and against an opponent that Stipe has not beaten before," Walter told ESPN. "He is more than willing to defend his belt. If an opportunity presents itself outside the UFC, Tyson Fury and Stipe spoke face-to-face in Las Vegas at the Conor McGregor fight."

Miocic is a two-time UFC heavyweight champion and holds the record for most consecutive title defences in the division.  After defeating Fabricio Werdum for the gold at UFC 198 in May of 2016, the Ohio native successfully retained the title three times before his loss to Cormier at UFC 226.

"Stipe is the ultimate competitor and wants to fight but is unwilling to jeopardize his health," Walter told ESPN.