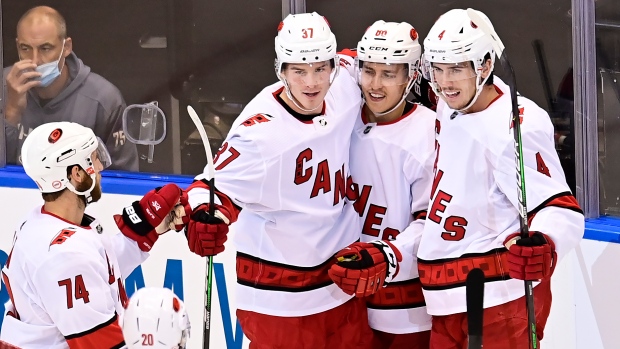 TORONTO — Sebastian Aho scored twice in the third period while James Reimer was strong in net to help the Carolina Hurricanes beat the New York Rangers 4-1 on Tuesday night and sweep the Stanley Cup qualifier series.

Warren Foegele scored the go-ahead goal early in the third period for the Hurricanes, redirecting a shot from the point by Brady Skjei to beat rookie Igor Shesterkin at 5:07 in the third. Then Aho followed with a highlight-reel goal about 5 1/2 minutes later, taking the puck from Rangers defenceman Jacob Trouba along the boards and skating in on Tony DeAngelo to backhand the puck past Shesterkin as he went to his knees.

Aho added a short-handed empty-netter late to seal it, with the Hurricanes sweeping the best-of-5 series after losing all four regular-season meetings against the Rangers.

Aho's big night, which included an assist, came after he had three assists in Monday's Game 2 win as well as a goal and an assist in the series opener.

“I felt like I worked really hard after the season was paused … and I knew if the season would continue I would ge in good shape,” Aho said. “I feel good right now.”

Reimer had a huge part of the win too, finishing with 37 saves that included a couple of big stops during a wild second-period sequence.

That included Reimer – who got the start after Petr Mrazek won the first two games of the series – stopping Brendan Lemieux as he skated in toward the crease. He was unable to control the puck as Carolina defencemen Jaccob Slavin and Sami Vatanen dove into the crease to clog the net, with Vatanen managing to make his own diving stop of Lemieux’s follow-up shot with his left shoulder.

“At first I thought it went in,” Reimer said of the first shot. “I took a peek behind me, it wasn’t there and guys were flying all over the place. And it’s kind of a helpless feeling because you don’t want to move and kick the puck in, and you’re trying to find it. Guys were diving all over the place.”

That bought time for Reimer to get to his feet, then make another in-close stop on Filip Chytil near the crease by extending out his right arm to deflect the puck.

Teuvo Teravainen also scored for Carolina early in the second period, a quick answer to a goal by New York’s Chris Kreider for a 1-0 lead that was the Rangers' first of the post-season.

Shesterkin, a 24-year-old rookie who went 10-2 after making his NHL debut in January, finished with 27 saves in his post-season debut after being unavailable in the series' first two games. But an offence that came into the series ranked fifth in the NHL (3.33 goals per game) managed four goals in three games.

With the loss, the Rangers are the first team eliminated from the NHL’s expanded playoff rounds but are also in the running to claim the No. 1 overall draft pick in Monday’s second draft lottery. One of the eight eliminated playoff teams will claim the chance to select Quebec junior Alexis Lafreniere, the projected top pick.

“Honestly it just sucks that it's done,” said Mika Zibanejad, who had 41 regular-season goals but none after Game 1 for the Rangers. “I don't know, just an empty feeling right now.”

NOTES: Lemieux made his post-season debut for New York after being suspended by the NHL last month for the first two games due to an illegal check that injured Colorado’s Joonas Donskoi in March. … Rangers winger Jesper Fast missed his second straight game. He left early in Saturday’s Game 1 after a hard hit from Carolina’s Brady Skjei, who was traded by the Rangers in February. … Carolina defenceman Dougie Hamilton remained out after missing the first two games and multiple practices.

The Hurricanes have advanced to the Eastern Conference quarterfinals.