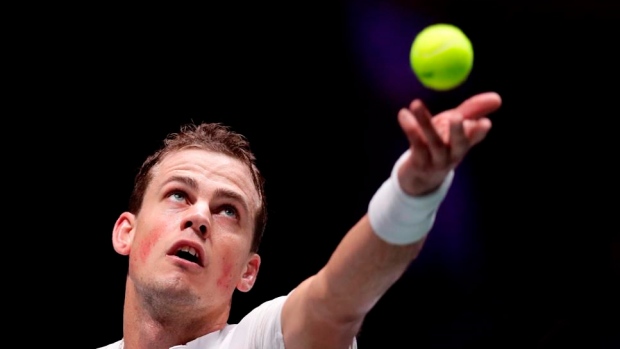 Even though Vasek Pospisil missed the first six months of the 2019 season to recover from back surgery, the Canadian tennis veteran still feels it was one of the best years of his career.

During his time away, he was able to pursue some business endeavours, think about post-career options and focus on friends and family. Pospisil returned to the court feeling more balanced and credits a "permanent mental change" for the emergence of more confidence as a person and a player.

"I think there's definitely been a lot of a lot of changes to the way I approach the game these days," he said.

Pospisil, who will face Croatian veteran Ivo Karlovic in the first round of the Australian Open next week, won two lower-tier events last fall before really emerging at the Davis Cup Finals in Madrid. His doubles pedigree made him an asset but he ended up being a singles anchor for a Canadian squad that stunningly made it to the final before falling to Rafael Nadal's side from Spain.

The 29-year-old from Vancouver looked like the player who cracked the top 25 in the world rankings in 2014. Nagging pre-surgery injury woes were a distant memory and the mental clarity was evident too.

"Now that I've been healthy, it's really quite something," Pospisil said in a recent interview from Auckland. "I think even just mentally and the weight off my shoulders. I'm just having so much more fun on the court too. Just being able to focus on trying to get better and what you need to do physically, tactically and technically wanting to improve.

"I can just put all my attention on trying to become a better player rather than wondering how my body is going to feel."

While off court, Pospisil dabbled in real estate. He started a few companies — including one with some longtime friends — and invested in a few others as well.

"Mostly it was just a very fun six-month period considering that I wasn't on the tennis court," he said. "I kept busy and I really felt like, 'Oh wow. Even if I don't go back on the circuit, I can be happy and make a living and be successful in whatever it is I decide to get into.'

"I think that's just kind of brought this calm feeling when I came back on the tour."

Now in his 14th season as a pro, Pospisil started working with coach and Davis Cup captain Frank Dancevic last summer. They have known each other for years, communicate well, and see the sport the same way, Pospisil said.

"I think we just really dialed in on my strengths," he said. "I think that just brought the results and shaped the rest of my game. I suddenly was a dangerous opponent again and moving really well and hitting my forehand big and serving big.

"That's always how I'm going to give myself the best chance of winning matches is when I'm serving and winning big forehands."

Pospisil upset ninth-ranked Karen Khachanov of Russia at the U.S. Open and beat 16th-ranked Diego Schwartzman of Argentina during a run to the round of 16 at the Shanghai Masters.

"It was the best that my body has felt in the last five or six years," he said. "So I think it was an extremely positive end to the year. I think more so mentally that actually showed that my body is in a place that (he) can play at the top of the sport and at a high level ... the end of the year kind of took me by surprise in terms of how I felt and how I played."

Pospisil hopes to work some doubles play into his calendar this season, but it will depend on his singles schedule. Currently ranked 146th in the world, he plans to use his protected ranking for entries through the Miami Masters in late March.

He fell to Davis Cup teammate Denis Shapovalov of Richmond Hill, Ont., in the second round of the ASB Classic on Wednesday, but his ranking is still expected to jump eight positions next week.

"I'd like to get back in the top 50 at some point this year," Pospisil said. "And who knows if I can go higher than that. But that's what I would like to do this year for sure."