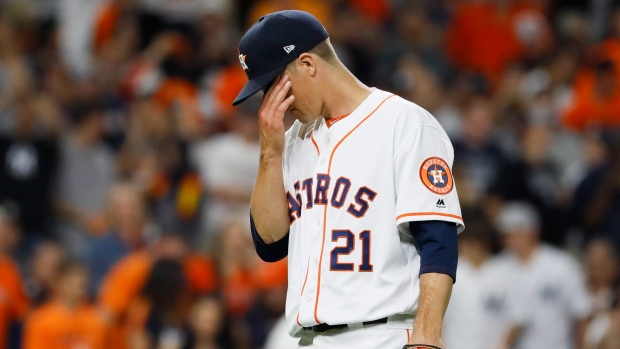 Houston's added ace is still looking for his first playoff win with the Astros after getting taken deep again.

At least the Astros have two All-Star pitchers lined up next after the New York Yankees tagged Zack Greinke in the AL Championship Series opener.

Greinke allowed two home runs in a span of three batters in the sixth inning Saturday night, and the Yankees went on to a 7-0 win at Minute Maid Park — where they lost all four games in their last ALCS appearance two years ago.

Already with Justin Verlander and big league strikeout leader Gerrit Cole, the Astros added Greinke, a six-time All-Star and 2009 AL Cy Young Award winner, in a somewhat shocking deal moments before the July 31 trade deadline. For a club already cruising toward a third consecutive AL West title, it was a move made for October — where the Yankees figured to be a powerful opponent.

After Verlander and Cole dominated the Tampa Bay Rays in the first two games of the AL Division Series, it was Greinke's turn in the post-season. He allowed three homers and six runs in 3 2/3 innings of a 10-3 loss to the Rays.

That prompted manager AJ Hinch to try to close out that series with Verlander on short rest in Game 4. When that didn't work, Cole had to pitch the decisive Game 5 against Tampa Bay only two nights before the ALCS started against the rested Yankees.

Verlander will be on regular rest for Game 2 on Sunday night. He also pitched the second game of the 2017 ALCS against the Yankees, a 124-pitch complete game when the Astros scored in the bottom of the ninth for their second consecutive 2-1 win to start that series.

Cole will go in Game 3 at New York on Tuesday night.

"I think it's important not to overreact to anything," Hinch said. "And credit the Yankees for having a really good first game. We'll see them tomorrow."

Greinke has allowed five homers and nine runs over 9 2/3 innings in his two playoff starts for the Astros, and his ERA in 13 career post-season starts remains at 4.58 — more than a run higher than his regular season mark.

Asked what was better, he responded, "I threw more innings this time than last time."

The Astros traded four prospects to get Greinke on the same day he made his last start for the Arizona Diamondbacks, at Yankee Stadium in a game Masahiro Tanaka started for New York. Both got no-decisions in that game, a 7-5 win by the Yankees in which Greinke struck out seven and allowed two runs over five innings. Greinke was in the visiting clubhouse after the rain-shortened outing when he learned he'd be dealt.

Tanaka was also on the mound Saturday night, relying heavily on his splitter and benefiting from two double plays to face the minimum 18 batters while allowing only one hit through his six innings.

"He lived on the edges and missed barrels. He's very good, and we didn't do anything offensively," third baseman Alex Bregman said. "I think everyone is frustrated when we don't win because we know we are a better offence."

After Bregman drew a leadoff walk in the fifth, when the Astros were down only 1-0, he slipped trying to get back to first and got doubled up on a strong throw by Aaron Judge after his running catch in the right-centre gap.

Greinke allowed three runs and seven hits over six innings. He struck out six without a walk, throwing 54 of 83 pitches for strikes.

The Astros suffered their first home shutout loss since June 27 and ended a streak of 30 consecutive games with a home run. They had homered in their first five playoff games after going deep in the last 25 games of the regular season, in the same year that the Yankees set a major league record by homering in 31 games in a row.

"We know we have a good team. Turn the page," Yuli Gurriel said. "Today was a bad day. Tomorrow we come out like we always do and go for the win and go 1-1."