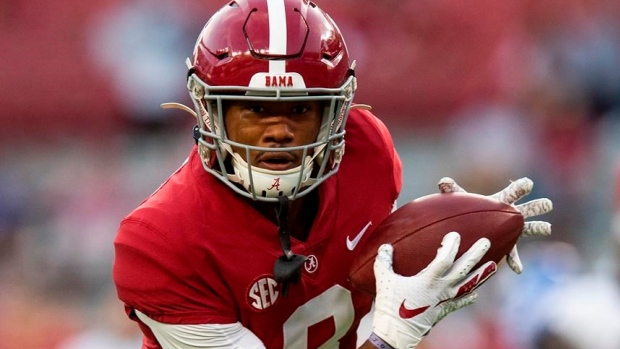 VANCOUVER — John Metchie III has the opportunity to join a very select group.

The Alabama Crimson Tide receiver was named a finalist Monday for the Cornish Trophy, presented annually to the top Canadian in NCAA football. Metchie III, a resident of Brampton, Ont., won the award last year.

If he can successfully defend his title, Metchie III would become just the second two-time winner of the award. The first was former Ohio University quarterback Nathan Rourke, a native of Victoria, B.C., now with the CFL's B.C. Lions.

The 2020 Cornish Trophy recipient will be announced April 19.

Metchie III was a second-team All-SEC selection last season after registering a team-high 96 catches for 1,141 yard and eight TDs. However, he suffered a season-ending knee injury in the first half of Alabama's 41-24 SEC championship win over Georgia and missed the Tide's 33-18 NCAA title game loss to the Bulldogs.

This off-season, Metchie III declared for the 2022 NFL draft.

Luketa, of Ottawa, had 61 tackles (8.5 for a loss) in 12 games as a linebacker/defensive end for Penn State. The six-foot-three, 253-pound Luketa also had an interception return for a TD.

Luketa is eligible for the 2022 NFL draft.

The six-foot-six, 190-pound Mardner, of Mississauga, Ont., registered 46 catches for 913 yards (19.8-yard average) and five TDs last season at Hawaii. Mardner exercised the transfer window in December and will play his 2022 senior season at Cincinnati.

Wayne was the second-leading receiver at Pitt last season with 47 catches for 658 yards and six TDs after starting four of the 13 games he appeared in. The six-foot-three, 210-pound native of Peterborough, Ont., is a former high-school quarterback and completed two-of-three passes for 36 yards and a touchdown.