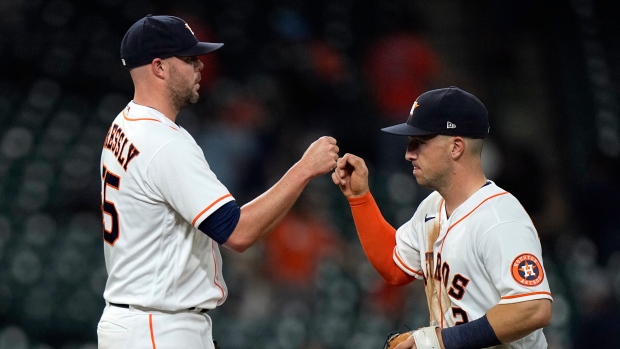 HOUSTON — Alex Bregman had three hits and three RBIs, Cristian Javier struck out a career-high nine in five scoreless innings and the Houston Astros snapped a three-game skid with an 8-2 win over the Los Angeles Angels on Thursday night.

The Astros had lost nine of 10 after a 6-1 start. They put their road woes behind them quickly in the opener of an eight-game homestand by jumping on Alex Cobb (1-1) for five runs in less than three innings.

The Angels lost for the third time in four games on a night when Mike Trout left in the fifth inning with a bruised left elbow after being hit by a pitch an inning before.

Albert Pujols, who has the most home runs of any player against the Astros, added to his total on Thursday night, hitting his 61st on a two-run shot in the sixth.

Carlos Correa had two hits, two RBIs and scored three runs. He was batting leadoff for the first time in his career with Jose Altuve on the COVID-19 list, a spot manager Dusty Baker said he’d keep until Altuve returned.

Javier (2-0) was sharp in his return after spending 12 days at the team’s alternate training site, allowing just three hits. He struck out six of his first seven batters, and his ninth strikeout came when he fanned Justin Upton for the first out of the fourth.

Thursday’s offensive outburst was much-needed for a team that had just eight runs combined in its last four games and that hadn’t scored more than five runs in a game since April 8.

Aledmys Díaz got things going with his double with no outs in the second before scoring on a triple by Myles Straw to make it 1-0. Correa reached on an error by Pujols that allowed Straw to score with one out.

There were two outs in the inning when Cobb’s bases-loaded walk of Yuli Gurriel pushed the lead to 3-0.

Martín Maldonado snapped an 0-for-13 slump with a two-out double in the third. Correa’s run-scoring single made it 4-0 and chased Cobb.

Alex Claudio took over and promptly gave up a ground-rule double to Michael Brantley. Bregman’s single to left field sent both runners home to extend the lead to 6-0.

Houston was up 8-0 after adding a run in the fourth and fifth innings when Pujols hit his homer to the corner of right field. The play was reviewed, as it appeared to be a foul ball, but it stood.

Angels: Trout was hit by a pitch on his left elbow to start the fourth. He writhed in pain for a bit before slowly trotting to first base where he was looked at by trainers before remaining in the game. But he only lasted one more inning before being replaced by Scott Schebler in centre field.

Astros: Baker said that Altuve, who has been on the COVID-19 list since April 14, is doing better and that he could return by late this weekend or early next week. Baker said Altuve has been doing cardio and weight training but that he hasn’t resumed hitting. ... Right-hander Lance McCullers Jr. said Thursday that he’s back to full strength after struggling with side effects from his vaccine in his last start on April 14.