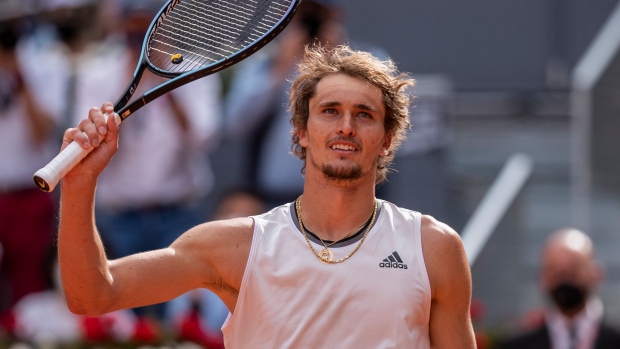 MADRID — Aryna Sabalenka is glad she changed her mind about playing at the Madrid Open.

Two weeks after nearly withdrawing from the tournament because of a muscle injury, Sabalenka was standing on centre court with the winner's trophy in her hands on Saturday.

The victory, coming two weeks after she was hurt in a loss to Barty in the Stuttgart final, will move the Belarus player to No. 4 in the world next week.

“To be honest, after the final in Stuttgart I was injured, I couldn't even move, I really wanted to withdraw from here,” she said. “And I don't know how, but my team ... the recovery was really good. In four days they made me feel much better. Somehow I'm here standing as the champion of this tournament.”

Sabalenka injured an adductor muscle in the three-set loss in Germany to Barty, who had won all of her three previous finals this year.

It was the second title for Sabalenka this year after winning the season-opener in Abu Dhabi. She also lost to Barty in the Miami quarterfinals.

In the men's semifinals, Alexander Zverev followed his triumph over Rafael Nadal with a win over Dominic Thiem to reach another Madrid Open final.

Zverev broke Thiem’s serve once in the first set and twice in the second on the Magic Box centre court.

The German has yet to drop a set, including against Nadal in the Friday quarterfinals.

“They’re probably the two clay-courters that you think of right now when you’re thinking about Roland Garros and the biggest chances of winning,” Zverev said of Nadal and Thiem. “Rafa is the favourite no matter what. Probably Novak (Djokovic) second, Dominic a close third. It’s been so far a good week for me. The job is not done yet.”

Zverev will face No. 10 Berrettini or Casper Ruud in the final, when he will be trying for his second title of the year after Acapulco in March.

Thiem was playing in his first tournament since March after consecutive losses in Dubai and Doha. He has mostly struggled since winning the U.S. Open for his first grand slam title.

“In general I’m super happy with the week,” Thiem said. “I would have never expected to be in the semifinals, to play in the semifinals a player like him. I cannot complain about anything. Just, of course, there are many things to improve.”

In the women’s doubles final, Barbora Krejcikova and Katerina Siniakova, both from the Czech Republic, defeated Ottawa's Gabriela Dabrowski and Demi Schuurs of France 6-4, 6-3.

Dabrowski and Schuurs won just 46 per cent of first-serve points and had 12 unforced errors against 10 winners to cap what was otherwise a successful first tournament for the new partnership.