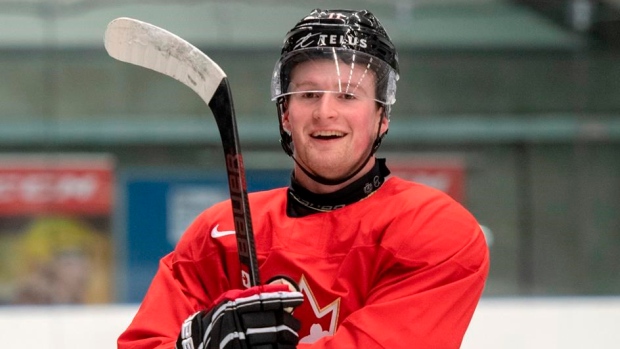 OSTRAVA, Czech Republic — Team Canada will go roaring into the 2020s with Alexis Lafreniere on Thursday.

That’s because Canada’s brightest young star will return for their knockout stage quarterfinal clash with Slovakia, according to sources, just five days after he left the ice in agony with what appeared to be a serious left knee injury.

The fear was that the injury would not only cost Lafreniere the the tournament, but the rest of his draft eligible season.

Lafreniere, 18, was all smiles on Wednesday. The projected No. 1 overall pick in June’s NHL Draft skated for more than 30 minutes as a full participant in Team Canada’s practice.

He zigged and zagged, cut and turn, shot and passed with ease - and even tested the knee with some light physical contact at the end of the session. Lafreniere left no stone unturned in his on-ice experiment.

“I didn’t see any rust on him,” teammate Ty Dellandrea said. “It’s pretty shocking, just [how bad] everyone thought it was … to be back skating like he was today was a quick turnaround and we’re all excited.”

Lafreniere was unavailable to speak to the media on Wednesday because Hockey Canada said he was “being evaluated by doctors” after practice.

That examination showed, according to sources, that there was no swelling in the joint, plus Lafreniere told them he did not experience pain on the ice. Lafreniere and his group then met with Team Canada management and doctors.

At that point, with the proper due diligence done that his knee was not at risk for further injury, the decision was made to put him back in the lineup for Thursday’s game (8:30 a.m. ET on TSN 1/3/4/5).

It would have been easy to play it safe and rest for two more days ahead of a potential semifinal matchup on Saturday against the winner of Russia and Switzerland.

After all, Team Canada could play probably Slovakia at half strength; they already won twice against better opponents in Germany and the Czech Republic without Lafreniere. Slovakia was the fourth place finisher in a weaker Group A and they needed only to beat struggling Kazakhstan to survive.

But Lafreniere was told that waiting until Saturday would not change anything.

Because this was a decision with wide-ranging implications for Lafreniere, beyond just Team Canada. His future health and the strength of his knee is much more important than an Under-20 tournament.

That’s why Lafreniere’s agent, Emilie Castonguay from Momentum Hockey, said in a statement earlier in the week that “if there is any risk to aggravate the injury or expose a weakened knee to any further injury, he will not be taking that risk.”

So many boxes needed to be checked to mitigate that risk. Lafreniere was examined by a local orthopaedic surgeon in the Ostrava area, plus the MRI images were reviewed by Hockey Canada's doctors back in Calgary, then independently by specialists in Minnesota and Montreal.

They were all in agreement. There were no tears to ligaments or fractures, it was only about how Lafreniere's knee responded to activity.

Now, NHL scouts can resume drooling about the St. Eustache (Que.) Flash. In one of the most well-scouted World Juniors ever, many NHL teams with lottery hopes have hung around the Czech Republic hoping to get another glimpse of him in a best-on-best setting.

Senators GM Pierre Dorion said this week even if Lafreniere was unable to return for the tournament, they already knew “without a doubt” where he would be on the board.

Getting Lafreniere back will also be a big boon for Team Canada’s lineup, which will be full-strength for the first time since the tournament opener.

“Huge,” Dylan Cozens said. “You saw what kind of player he is in the one game that he played. He’s an unbelievable player. He’s a game-changer. He’s a guy that every time he’s on the ice, he’s a threat to score.”

Assistant coach Mitch Love called Lafreniere an “elite player” and joked that he might be able to squeeze the phenom back onto the team’s power play that poured in five goals against the Czech Republic to close out the preliminary round.

“At first glance there on Saturday night, it didn’t look good,” Love said. “He just looked happy and excited to be on the ice with his teammates. I know it’s hard for young kids to be off the ice in an event like this.”