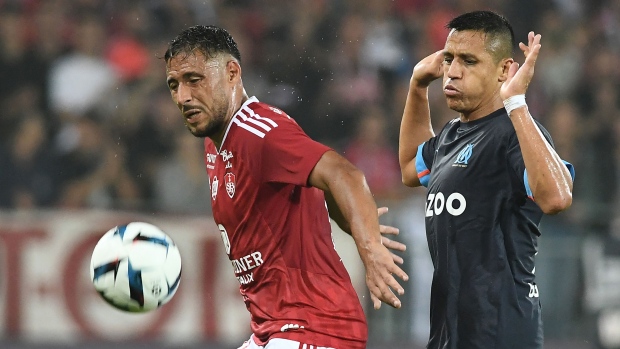 Alexis Sanchez made his French league debut for Marseille but the veteran forward was unable to make a decisive impact in a 1-1 draw at Brest on Sunday.

Sanchez joined from Inter Milan and came on at the start of the second half. The former Barcelona, Arsenal and Manchester United player was soon involved in attacking moves.

But the 33-year-old Chile international's enthusiasm got the better of him when he tracked back eagerly only to give away a corner with an over-hit back pass.

Left wing back Nuno Tavares made it two goals in as many games since joining from Premier League club Arsenal when he put the visitors ahead in the 38th minute, volleying home from right wing back Jonathan Clauss' pinpoint cross.

Brest hit back on the hour when Pierre Lees-Melou unleashed a superb half-volley from 20 meters into the right corner following a corner.

Marseille is in second place on goal difference from four other teams and two points behind leader Paris Saint-Germain.

Marseille’s new coach Igor Tudor again left playmaker Dimitri Payet on the bench, even though he was among Marseille’s best players last season.

Payet came on for the last 20 minutes and combined well with Sanchez.

In the day's other main game, Nice drew 1-1 at home with Strasbourg.

Premier League veteran Kasper Schmeichel started in goal for Nice after his move from Leicester following 11 years with the club, while former Arsenal and Juventus midfielder Aaron Ramsey was on Nice's bench despite scoring in the opening round.

Striker Andy Delort put Nice ahead from the penalty spot in the 35th after forward Amine Gouiri was fouled, but veteran striker Kevin Gameiro equalized for Strasbourg in the 56th.

Strasbourg substitute Ludovic Ajorque, who wants to leave for a bigger club, missed a chance to win the game when he shot over the crossbar during injury time.

Serbian striker Komnen Andric scored twice in Clermont's 4-2 win at Reims, while British forward Rhys Healey was among the scorers as promoted Toulouse won 3-0 at Troyes.

Angers came from 2-0 down inside 10 minutes to secure a 2-2 draw at promoted Auxerre, the French league champion in 1996.

Corsican team Ajaccio held northern club Lens to a 0-0 draw, with the teams about 1,050 kilometers (650 miles) apart on the map.

Lorient's home game with Lyon, set for Sunday lunchtime, was postponed after the league decided the field was not safe to play on — following a heatwave and a recent Celtic festival held inside the Stade du Moustoir.

But Lorient's president Loic Fery posted a message to his club's fans on Twitter, in which he said Lorient was ready to play and blamed Lyon for pressuring the league into taking the decision.

“Under pressure from Lyon, which threatened the LFP (League) with damages in case of injury, the (league's) commission unfortunately decided to postpone the game,” Fery wrote. “We're sorry and disappointed, because we thought it was possible to play on Sunday without putting the players' health at risk.”

PSG tops the league after routing Montpellier 5-2 on Saturday for a second win.