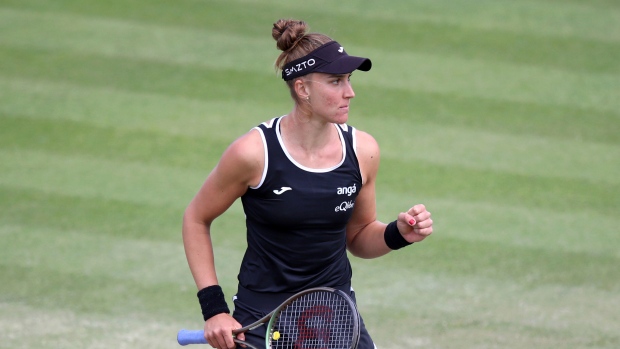 NOTTINGHAM, England (AP) — Alison Riske and Beatriz Haddad Maia will face each other for the Nottingham Open title after winning their semifinal matches on Saturday.

Riske, the sixth-seeded American, beat Viktorija Golubic 6-3, 4-6, 6-3 in a rain-delayed match and will look to capture the fourth title of her career in Sunday's final of the grass-court tournament.

Haddad Maia, the seventh-seeded Brazilian, advanced when Tereza Martincova was forced to retire in the second set. Haddad Maia was leading 6-3, 4-1 and will be playing in her second WTA final — five years after finishing runner-up at the 2017 Korea Open.

In the men's event, top-seeded Dan Evans of Britain beat Jack Sock of the United States 7-5, 6-3 to advance to a final against Jordan Thompson, who won an all-Australian semifinal match 6-4, 6-2 against Alexei Popyrin.