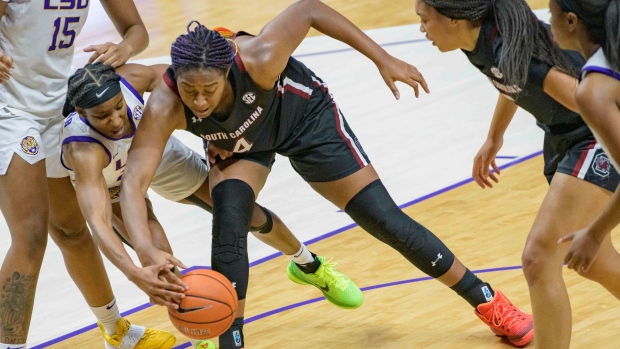 BATON ROUGE, La. (AP) — Aliyah Boston scored 11 of her 20 points in the second half and grabbed 14 rebounds to help No. 4 South Carolina secure a 69-65 victory over LSU on Sunday.

Khayla Pointer scored 18 and Tiara Young 16 for the Lady Tigers (6-7, 4-3) who’d defeated No. 8 Texas A&M earlier this month and looked primed to stage their second upset of a top 10 team in two weeks when they carried a lead into the fourth quarter.

LSU took a 45-43 lead into the fourth quarter after Faustine Aifuwa’s jumper beat the clock at the end of the third period, and Awa Trasi’s layup briefly widened the lead to 47-43 before South Caroina suddenly seized momentum with a 9-0 run.

The surge began with Boston’s bucket and featured five points by Henderson on a 3-pointer and free throws. LeLe Grissett’s fast-break layup capped the run and made it 52-47 with 7:37 left.

The 6-foot-5 Boston, who came in averaging 14.4 points, didn’t score in the second half until she hit two free throws with 4:22 left in the third quarter to give her 11 points, but produced as the Gamecocks needed her to down the stretch.

The teams combined to start 0 for 10 from the field before Pointer’s layup tied the game at 2 nearly three minutes into in the opening quarter.

The gritty, physical and defensive-oriented first few minutes foreshadowed a tight and competitive first half during which both teams shot below 34% and neither team led by more than five points.

Young hit four of her first five shots and had 10 points in the opening half, giving LSU a 14-13 lead with a jumper early in the second quarter.

Boston scored nine in the first half, and her layup put the Gamecocks up 21-19 late in the second quarter.

But LSU tied it on Trasi’s layup and regained the lead at 25-23 when Seay stole the ball from Cooke near mid-court and converted a fast-break layup with a second left before halftime.