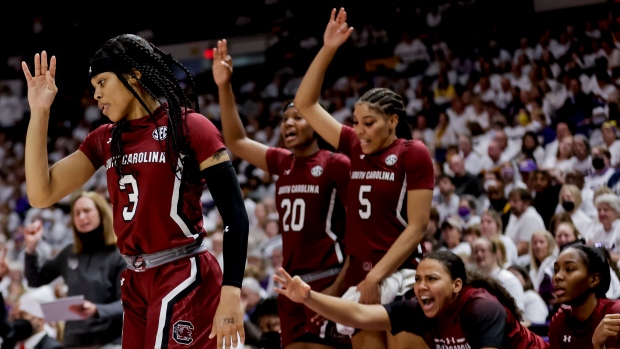 Zia Cooke scored 17 points and Destanni Henderson had 16 for the Gamecocks (14-1, 2-1 Southeastern Conference), who have won two straight since losing in overtime at Missouri in their SEC opener.

South Carolina trailed by six points at halftime but built a seven-point lead with 5:21 left. LSU (14-1, 2-1) twice got within three points but could not get closer.

Jailin Cherry’s jumper with 13.2 seconds left got LSU within 64-60, but one last offensive rebound by Boston off a missed free throw helped South Carolina close out a game in which it dominated the boards 48-24.

LSU came out of the gate sizzling, hitting its first nine of 11 shots, and the Tigers led 29-18 midway through the second quarter. But the Gamecocks found some rhythm and got within 34-28 at halftime.

South Carolina pushed ahead 36-35 in the third quarter as LSU’s offense went cold and led 47-44 heading into the fourth.

None of them could handle Boston.

LSU: It’s been so long since LSU was relevant in women’s basketball that Thursday was the first time in 13 years that it hosted a matchup of teams ranked in the top 15. Among those in attendance were Louisiana Gov. John Bel Edwards and Houston Astros third baseman Alex Bregman, an LSU alum.

South Carolina: The Gamecocks were short-handed, with reserves Laeticia Amihere and Olivia Thompson still in COVID protocols. Amihere averages 7.2 points and is third on the team in steals (14) and blocks (17).

Former Tigers star Seimone Augustus, the most decorated player in school history with four Final Four appearances, four WNBA titles and three Olympic gold medals (the last in 2020 under South Carolina coach Dawn Staley), was honored before the game. Augustus played 15 seasons in the WNBA and retired earlier this year. The 37-year-old was selected to both the league’s 20th and 25th anniversary teams.

LSU: At Auburn on Sunday.