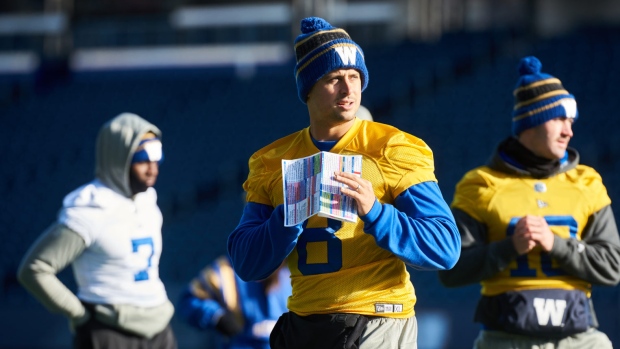 It’s fitting that a Canadian Football League season dominated by quarterback injuries heads into its second-last week with the return of an often-injured quarterback playing out as the biggest drama.

Zach Collaros hasn’t taken a live snap since the opening series of the season in June when, as a member of the Saskatchewan Roughriders, his seven-yard scamper ended with a head shot delivered by Hamilton’s Simoni Lawrence.

Since then he’s been traded twice and seen multiple doctors and specialists for concussion symptoms, as well as issues with his neck and jaw. He returned to full practice just two weeks ago with the Blue Bombers.

On Friday, Collaros will lead his team’s hopes of earning a home playoff game when the Bombers host the Calgary Stampeders.

The possibility of an injury to Chris Streveler, which is what occurred late during last week’s game against Calgary, was exactly the reason why the Blue Bombers traded for Collaros on Oct. 9.

It’s tough to say how much of the Winnipeg offence he’s been able to grasp, although the nature of football means any quarterback with only two weeks of practice – and just two full practices of first-team reps – is going to be limited.

The good news is that Winnipeg’s offence is designed to be less reliant on the quarterback than any other in the CFL. While the quarterback still matters more than any player in the offence, the Blue Bombers run the ball more often and more effectively than any team in the league. They have the fewest passing yards in the CFL, yet are bunched with three other teams behind Hamilton for the most offensive points per game and are just one behind the league lead in offensive touchdowns.

So Collaros won’t be expected to win Friday’s game with his arm alone.

Winnipeg has a bye in the final week of the regular season, so where this leaves them at quarterback for a Nov. 10 playoff game is hard to say. A decision is likely to be based on some combination of Streveler’s health and how well Collaros performs against the Stamps.

The elephant in the room on this story is the multiple head injuries Collaros has suffered and what degree of risk he’s taking by being on the field. There were three head injuries last season – one in preseason (undiagnosed), one early in the season and another late in the year that ended his 2018 season – before the one suffered against Hamilton in the 2019 opener.

CFL teams and doctors are all under the direction of league protocol, which is derived from internationally established standards for returning to play. But that doesn’t include the option of telling players who’ve been medically cleared that they can’t play football anymore.

The Saskatchewan Roughriders will avoid any quarterback uncertainty this off-season after inking Cody Fajardo to a two-year deal, with a base salary of around $400,000 per season and playtime incentives that can take the deal up another $50,000 per year.

On the surface, that’s a healthy contract for a player who’d never been a starting quarterback until this season. But it tells us the Roughriders are convinced by what they’ve seen and are happy to pay what may be a small premium to secure the game’s most important position.

Saskatchewan is 11-5 with Fajardo starting all but the first game of the season, completing 71.5 per cent of his passes for 3,873 yards – just 24 behind league leader Mike Reilly of B.C., who is done for 2019 with an injury.

He has a healthy 16:8 touchdown to interception ratio, has also rushed for 610 yards and 10 scores and has a lower interception percentage than any starting quarterback besides Edmonton’s Trevor Harris.

And in a year where the durability of quarterbacks has been a huge issue, Fajardo is the only one to play in every single game for his team this season. Hands up if you had that one in the pool.

Fajardo has also been an ideal fit off the field in Saskatchewan, where his willingness to interact with the community has only contributed to his popularity.

Given all of that, and the fact that the new ceiling for CFL quarterbacks is in the $700,000 range, the Roughriders’ deal with Fajardo makes sense.

From Fajardo’s side of things, it was smart to strike a deal while the iron was hot.

Consider that prior to 2019, through three CFL seasons with Toronto and B.C., Fajardo had completed just 43 passes in his career. He was primarily used as a third-string quarterback who took short-yardage duties. To go from that to potentially leading the CFL in passing in one season is unprecedented in this era, so it’s hard to think his stock could soar much higher in the short term.

Given the nature of playoff football, where weather and stout defences can make moving the football a challenge, a poor performance in November could have opened the door for some doubt to creep in.

For both sides, this was a deal that made perfect sense to put to bed early.

One of the biggest myths about Canadian football is that the regular season doesn’t really matter. The playoffs are a new season and everyone has the same shot, so all that really matters is getting to the postseason.

The evidence, however, suggests otherwise.

That’s why the last two weeks of this regular season have huge implications for Calgary, Winnipeg and Saskatchewan as they battle for the first three spots atop the CFL’s West Division.

Winnipeg, which plays its final game of the regular season Friday against Calgary, can’t finish higher than second, a disappointment for a team that led the division most of the season before quarterback Matt Nichols was lost to a shoulder injury in August.

Consider that over the past five seasons, all 10 teams that played in the Grey Cup have finished first in their respective divisions.

One has to go back to the 2013 Grey Cup game to find a team that finished second, and there were two of them that season in the meeting between Hamilton and Saskatchewan – a repeat of one year earlier when second-place Calgary met second-place Toronto.

But 2011, 2009, and 2008 were all matchups of first-place teams. Over the past 11 seasons, of the 22 Grey Cup participants, 17 (77 per cent) were teams whose path to the big game consisted of finishing first and then having only to win a single home game, coming off a week of rest.

No team has finished third in a division and got to a Grey Cup game since the 2005 Edmonton Eskimos, who finished with an identical 11-7 record as second-place Calgary before winning consecutive road playoff games against the Stamps and Lions.

And no team has ever successfully taken the crossover route, as the Eskimos must do when they play the East Division semifinal at Montreal.

No path to a Grey Cup is impossible, but history tells us that some are undoubtedly much easier than others.

CFL commissioner Randy Ambrosie has maintained he expected the Montreal Alouettes ownership situation to be resolved well before the end of the regular season.

That won’t be the case, with no announcement yet as the league heads into its second-last weekend of games.

The league has been in negotiations for months with brothers Peter and Jeffrey Lenkov, two Montreal expats who’ve been residing in Southern California for the past three decades. On Oct. 11, the Montreal Gazette’s Herb Zurkowsky reported the Lenkovs would take a 51 per cent share of the team, with former Montreal Canadiens president Pierre Boivin and Claridge, the investment firm representing Stephen Bronfman and family, controlling the other 49 per cent.

The ownership uncertainty hasn’t hurt the Alouettes on the field, but this is a matter that needs to be closed soon. The Alouettes need a strong off-season – both in football and the business community – heading into 2020. That can't happen without new ownership settled and in place.

Halifax stadium to be determined in December

Halifax Regional Council defeated a motion to scrap further study of a proposed stadium for CFL football this week by a 9-8 margin in a vote that would have required a two-thirds majority to be successful.

That bit of good news, however, doesn’t mean there’s much room for optimism, given the comments from Mayor Mike Savage this week.

“There are a lot of councillors who’ve indicated they're not supportive of a stadium,” Savage told Halifaxtoday.ca. “Whether there is an opportunity for people to change their mind as we get more analysis from staff I don't know. I wouldn’t see it as a hopeful sign that the stadium would pass council when it comes back.”

Those are chilling words, given the mayor’s support from the outset for the idea of a stadium and a CFL team in Halifax.

Council did pass a vote to have staff return with an analysis by December, rather than waiting months into the new year for a full report. A vote is expected in December.

All of which highlights the difficulty of financing stadiums in Canada, where the outdoor season is limited and the CFL’s economics don’t justify team owners footing the bill all by themselves. The political culture in Canada, unlike in much of the U.S., is also resistant to putting public dollars at risk for professional sports facilities.

All of those dynamics appear to have put the CFL’s Halifax dream in jeopardy.