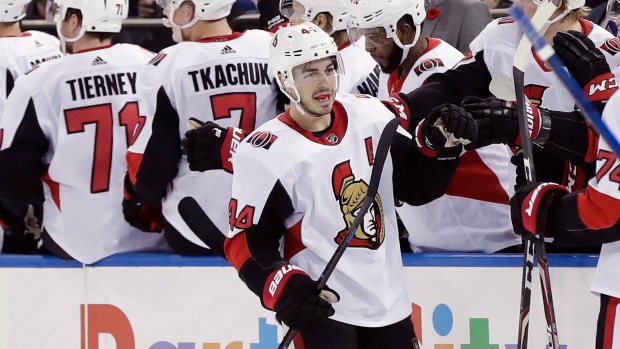 Jean-Gabriel Pageau is off to the best statistical start of his NHL career.

The centreman is currently leading the Ottawa Senators with six goals and sports the best plus/minus rating of any player in the NHL with a whopping plus-15.

The impressive start couldn’t have come at a better time for Pageau, who is eligible to become an unrestricted free agent at the end of this season. But Pageau hasn’t been able to use any of his stats as leverage so far, as it appears his camp hasn’t engaged in any meaningful contract talks with the club.

“No. No talks right now,” Pageau said Thursday when asked if there are any ongoing negotiations with the Senators. “It’s not in my main focus to be honest. I barely think about it. I’m taking it day-to-day here, trying to give my 100 per cent just so I don’t have regrets. I want to leave everything out there. I take pride every night that I wear a Sens jersey right now, so we’ll see. I’m not too worried about it.”

Based on that answer, it’s clear Pageau wants to hold his cards close to his vest – not publicly tipping his hand if he wants to stay with a rebuilding Ottawa club or be traded to a contender.

“I’m trying to take day-to-day right now. I’m a Senator. I’m going day-to-day, trying to get better,” he added. “That’s not something I can control and I’m not focusing on right now.”

Pageau, who turns 27 next week, has quickly morphed into one of D.J. Smith’s most reliable forwards. The Senators’ head coach heaped a healthy amount of praise towards his centre on Thursday, noting that Pageau is the heartbeat for the Senators’ forward core – in a similar fashion to what Boston superstar centre Patrice Bergeron does for his group.

“I think you’d be crazy not to look at their mould with Bergeron and their leadership and not try and go with that. And I think Pageau is our leader up front,” Smith said.

Pageau, who serves as an alternate captain, seems to embrace his role as a mentor to a roster chock full of young and impressionable players.

It remains to be seen if Pageau is willing to be in this rebuild for the long haul. Realistically, the Senators are still likely two or three years away from being a legitimately competitive team.

Would Pageau be willing to sign up for a couple more years of this – or would he prefer to land with an immediate playoff contender?

While he’s not answering that question publicly right now, the Senators will have to evaluate if Pageau fits into the grand scheme of their rebuild.

The club has already signed Colin White to a six-year contract with an AAV of $4.75 million. That would appear to be a contract to fulfill the club’s need for a No. 2 centre for the foreseeable future. Could they afford to pay Pageau something similar to be a No. 3 centre – or will their salary structure dictate that he would need to stay more in line with his current deal in the $3 million range?

General manager Pierre Dorion will also have to wrestle with the idea of another club offering him a handsome return for Pageau’s services as a rental around the trade deadline.

Pageau has a reputation of elevating his game to another level in the postseason, as evidenced by his two career playoff hat tricks. Considering the Senators were able to fetch a first-round pick and a blue-chip goalie prospect for Derick Brassard at the 2018 trade deadline from Pittsburgh, it’s not out of the realm of possibility that Dorion could land a similar package for Pageau in the months ahead.

And if that return makes more sense for the rebuilding Senators, it could be a win-win scenario for both the player and the club.

In any event, Pageau’s fast start to the season is greatly enhancing his value. After missing half of last season with a ruptured Achilles tendon, he has looked more explosive and dynamic this year.

He had extended conversations with Erik Karlsson and other players who experienced that type of injury, and was told it would take about a calendar year to feel like his old self.

“There’s no pain in my ankle,” Pageau now says.

On Monday evening in Madison Square Garden, Pageau blocked a shot at his own blueline and then won a 120-foot race to the puck against a pair of Rangers defenders before picking the corner to beat Alexander Georgiev for a highlight-reel goal.

“I’m feeling good on the ice right now and feel confident in my abilities,” said Pageau. “Obviously I’ve never been that big a goal scorer. You need that lucky bounces and the confidence to be on your side and I think that’s what’s happening right now. Obviously there is a lot of hockey to be played and I want to keep going the same way.”

That Pageau is leading the NHL in plus/minus is a staggering statistic, considering the Senators are languishing at the bottom of the standings and are still giving up a high number of shots and quality scoring chances against each night.

“It’s good for him that he’s plus (15) considering we don’t score many goals,” Smith said. “He has played great.”

“I’m happy. It’s something that I always take pride in defending against the other team,” Pageau said.

Perhaps there is a little fatigue in this marketplace when it comes to popular players potentially being pushed out the door before they cash in as free agents. While Pageau doesn’t have the superstar status of the likes of Karlsson, Mark Stone or Matt Duchene, he has carved out a reputation of being a fan favourite in the nation’s capital.

Pageau is in a stratosphere of popularity that probably falls somewhere around a player like Mike Fisher in his prime. Not exactly a superstar or offensive threat, but wildly popular with the fan base. But like Fisher, he’s also a little bit of a “tweener” – someone who could either be a second- or third-line centre.

Whether the Senators decide to pay him as a second or third-line centre could very well determine his future in this market.

But if he doesn’t fit with the rebuild here in Ottawa, his terrific start to the 2019-20 season means that Dorion may once again have one of the most valuable chips to play at the trade deadline.