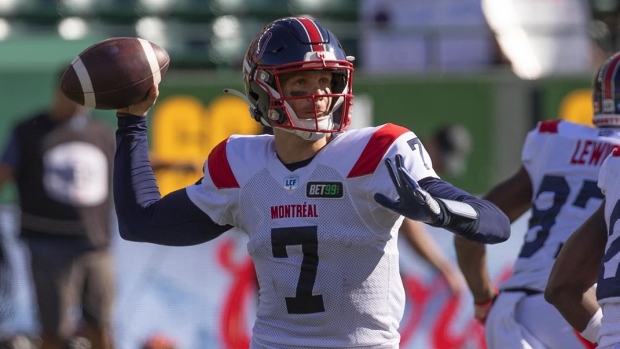 It's a very simple scenario facing Trevor Harris and the Montreal Alouettes: Beat the Ottawa Redblacks on Monday and clinch a home playoff date.

The two teams open a home-and-home series at Molson Stadium on Thanksgiving Day. Ottawa (3-11) will host the Alouettes on Oct. 14.

Watch and stream Redblacks vs. Alouettes beginning at 1pm ET/10am PT on TSN1/3/4/5, TSN.ca and the TSN App.

Montreal (7-7) has won three straight and is just two points behind the first-place Toronto Argonauts (8-6) in the East Division. And the Alouettes' final four regular-season games will be split between Ottawa and the Argos.

Toronto will face B.C. and Edmonton before finishing up with the home-and-home series against Montreal. The Argos are 6-2 within the East Division but 2-4 against West Division competition.

Montreal is 4-4 against Western clubs and 3-3 within the East.

Montreal hasn't lost since a 38-24 home setback to Ottawa on Sept. 2. The Redblacks registered four sacks in that game, including two by Lorenzo Mauldin IV, the CFL leader in sacks (club-record 14) and multi-sack games (five).

Last week, Montreal rode its defence to a 25-18 road victory over Edmonton. Tyrice Beverette's 100-yard interception return TD in the fourth quarter broke an 18-18 tie and was the first of three late turnovers the Alouettes forced in handing the Elks a CFL-record 15th straight home loss at Commonwealth Stadium.

Montreal and Ottawa have split their two meetings this year. The Alouettes earned a 40-33 road victory in July.

The Redblacks remain in playoff contention, although just barely. If Saskatchewan beats Hamilton on Friday and Montreal wins Monday, Ottawa will be eliminated from post-season consideration.

And since downing Montreal last month, Ottawa has lost three straight. The Redblacks are also 2-4 against division rivals.

But facing Montreal has agreed with Ottawa receiver Jaelon Acklin, who has 12 catches for 292 yards (24.3-yard average) in the two games.

Caleb Evans was 25-of-40 passing for 297 yards and a TD while rushing for two scores in the first meeting with Montreal. Nick Arbuckle completed 20-of-31 passes for 313 yards and a touchdown in last month's victory.

Harris has started both games against Ottawa, completing 47-of-60 passes for 597 yards with four TDs and two interceptions. And the Alouettes could have stalwart running back William Stanback (fractured ankle) in the lineup.

Teams playing after the firing of a head coach usually respond immediately. But if Montreal considers itself the best team in the East, this is a game those clubs win.

At Hamilton, this contest could have huge crossover implications. The Ticats (4-10) are third in the East while Saskatchewan (6-9) is fourth in the West. The Riders face a tough end to their regular season with a home-and-home series versus Calgary (10-5). They head to Tim Hortons Field having lost four straight but are 3-3 versus the East Division. Last month, the Ticats stunned Winnipeg 48-31 at home but haven't played since a disappointing 23-16 road loss to Montreal on Sept. 23.

At Toronto, the Argos (8-6) look to kick-start their offence following last week's 29-2 road loss to Calgary. McLeod Bethel-Thompson was 19-of-38 passing for 194 yards and two interceptions as the Stampeders had three picks overall. Defender Jamal Peters (head) and his CFL-best six interceptions return but linebacker Wynton McManis (knee) and defensive end Shane Ray (torn biceps) are out. Receiver Lucky Whitehead (ankle) could join Bryan Burnham (wrist) on the sidelines for B.C. (10-4), which is 5-1 on the road and 4-1 versus the East.

At Winnipeg, the Bombers (13-2) can clinch first in the West with a win and B.C. loss. They're 8-0 versus conference competition and 6-1 at home. Zach Collaros looks poised to defend his outstanding player award as he leads the CFL in passing (3,874 yards) and TDs (32). The good news for the Elks (4-10) is they're not at Commonwealth Stadium but unfortunately, standout receiver Kenny Lawler (shoulder surgery) is out. A loss or Saskatchewan win would end Edmonton's playoff hopes.