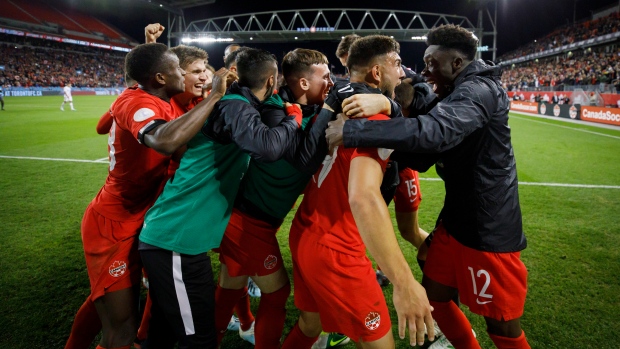 TORONTO — After years of watching from the cheap seats as the U.S. bossed CONCACAF alongside Mexico, Canada struck back Tuesday.

John Herdman's team registered a famous 2-0 victory over the 21st-ranked Americans, with goals from Alphonso Davies and substitute Lucas Cavallini ending a 34-year, 17-match winless run for No. 75 Canada against their North American rivals.

The Canadian men were full value for the victory, which moves them into the driver's seat in Group A of CONCACAF Nations League A play.

"This is an amazing feeling and I feel like this is a new Canada. And (I'm) looking forward to the future," said 19-year-old Jonathan David, who joined forces with the 18-year-old Davies to terrorize U.S defenders.

"This is unbelievable. Unbelievable ... We showed that we have a young team who's going to bring new football to Canada," added veteran goalkeeper Milan Borjan.

"There's been a lot of us in this (Canada Soccer) Association that have been grinding away, waiting for a night like this on the men's side," said Herdman.

Hard-charging Canada was a bundle of energy all night, harrying the Americans when they had the ball and using the pace and guile of Davies and David to cause havoc up front.

Herdman said before the game that desire not tactics would win the day. Nevertheless he had his tactics right, suffocating the U.S. in midfield, and his players showed their heart. They ran and ran and ran.

"I think the first thing that stands out to me was desire, (the) desire of Canada," said U.S. coach Gregg Berhalter. "Give them credit. But having said that, the minimum we expect is to match that."

"I wasn't happy with the desire that we displayed tonight to win the soccer game," he added. "Too many 50-50 balls we lost and that hurt us."

Samuel Piette sucked up balls in the midfield all night long for Canada with captain Scott Arfield and Jonathan Osorio playing provider on the goals.

Davies opened the scoring in the 63rd minute after U.S. midfielder Michael Bradley, who normally calls BMO Field home as Toronto FC captain, lost the ball. The Americans cleared it but it came right back and Arfield raked a low cross across the penalty box that a sliding Davies knocked in at the far post.

The Bayern Munich teenager, who had been a danger-man all night, turned from the goal and raced away in celebration before being mobbed by teammates. He exited three minutes later to a standing ovation from the announced crowd of 17,126.

It was his fifth goal for Canada and, he acknowledged, the biggest of his young career. "(I had) millions of emotions running through me on that goal," Davies said.

The elegant teenager showed why Bayern Munich wanted him so badly, slashing past defenders and generally causing havoc. With such expectations comes pressure. Herdman is doing his best to ease the load off Davies' shoulders.

"He just needs to be a kid and enjoy it ... Just let Phonzie play his football. We don't need to put him up in lights," said Herdman.

Davies may be a world soccer starlet but he is just 18.

"He was telling us he just bought a BMX (bike) recently," said Herdman. "He's always wanted one."

Cavallini, taking a looping ball from childhood friend Osorio, hammered home a right-footed shot in stoppage time to rub salt in the U.S. wound. The burly striker kissed the Canadian crest as he celebrated the goal.

It was a high-tempo, occasionally ill-tempered game with spectators perhaps wondering early which team was the higher ranked.

Canada came out flying and kept its foot on the throttle, frustrating the Americans.

"They put a lot into the game," said Bradley. "They treated it like it was a cup final. They stepped up harder, they reacted quicker to every loose ball. In all the little ways in a game like that, they were on top of things."

"It felt like they were winning every second ball," added midfielder Christian Pulisic.

The U.S. has dominated Canada in recent years. It came into the match leading the overall series 14-8-11 and had not lost to the Canadians since a 2-0 decision in April 1985 in Vancouver.

None of the Canadians Tuesday had been born then.

The two teams will face off again Nov. 15 in Orlando. The U.S. will play Cuba four days later in the Cayman Islands capital of George Town.

"Yeah we made history tonight but our job is not done," said Davies. "We play them again next month. Our focus is .. (to) repeat what we did tonight in November."

A tie in November will be enough for Canada to win the group and advance to the tournament's final four.

According to Canada Soccer, the win moved the Canadian men past El Salvador into sixth spot among CONCACAF countries. Canada, which ranked seventh in the region in the most recent rankings, is looking to crack the top six in the region after the June international window so as to qualify for the six-team Hex, the most direct World Cup qualifying route out of CONCACAF.

The win over the U.S. was worth valuable ranking points.

Herdman fielded Borjan behind a backline of Kamal Miller, Derek Cornelius, Steven Vitoria and Richie Laryea with Arfield, Piette, Osorio and Mark Anthony-Kaye in the midfield and Davies and David up front.

The Canadians played a 4-4-2 formation with Piette and Kaye the back pair in a box midfield.

The Americans hoped to switch the ball from side to side to escape the midfield crush, but had limited success.

Bradley earned his 151st cap, becoming the first U.S. national team player to appear in an away match at his current home club stadium. Montreal Impact fullback Daniel Lovitz also started for the Americans, who were captained by Tim Ream.

Helped by Bradley, the U.S. starting 11 totalled 297 caps going into the game. Canada's starters had 200 caps combined with Borjan, Piette and Osorio accounting for 120 of them.

Canada lost Kaye in the fifth minute when the LAFC midfielder went down clutching his hamstring. He went straight to the locker-room with Toronto FC's Liam Fraser, earning his first cap, coming on.

BMO Field has been a fortress for Canada. The Canadian men are 11-1-7 there since the venue opened in 2007 and is currently riding an eight-year, 16-match unbeaten run there. Canada had posted seven straight shutouts and conceded just once in its last 14 matches there.

Both Canada and the U.S. have already clobbered Cuba in Group A play.