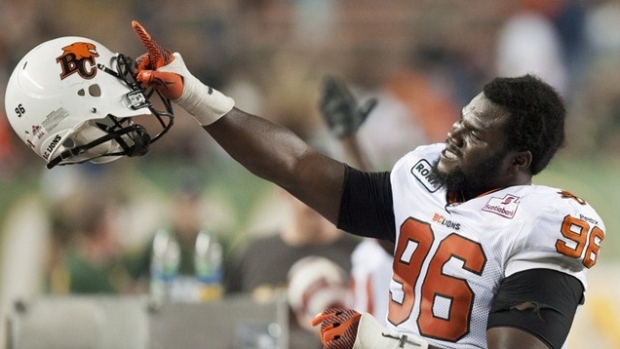 The CFL and the Montreal Alouettes announced on Thursday afternoon that they had each fined defensive tackle Khalif Mitchell for violation of social media policy after a series of tweets issued by the 30-year-old promoted the denial of the Holocaust.

"There is absolutely no place in our league for commentary used to divide or disparage others along the lines of sex, race, religion or sexual orientation," said CFL commissioner Jeffrey Orridge in a release. "While we acknowledge that players have a right to hold and express their own opinions, in no circumstance do we condone activity or comments that are derogatory or inappropriate, putting the League's reputation in question - and we feel Mr. Mitchell's recent posts on social media have violated these principles."

The Alouettes also released a statement to denounce Mitchell's tweets.

"His postings are disappointing and in no way reflect the opinions and values of the Montreal Alouettes Football Club," said team president and CEO Mark Weightman in the statement. "His postings were completely unacceptable and the Alouettes apologize to anyone who was offended by them."

Earlier on Thursday, Mitchell denied that he's anti-Semitic in an interview with Sean Fitz-Gerald of The National Post.

Mitchell purports that his views on the matter have been misconstrued.

“My opinion is not that the Holocaust did not happen,” Mitchell said to Fitz-Gerald. “My opinion is that the Jews and the Germans don’t have a hate/blood relationship as being perpetuated in the media. And that is my view.”

B'nai Brith Canada issued a news release earlier in the day announcing that it had contacted the Alouettes about Mitchell's social media activity.

"While understanding that we cannot judge the stream of consciousness of individuals who share offbeat Internet postings, these repugnant tweets are shameful not just to Mr. Mitchell, but the entire Alouettes organization which he represents by displaying its logo and proudly donning its jersey on his twitter account," B'nai Brith Canada chief executive Michael Mostyn said in the release.

"As an all-star and role model for Canadian youth, Mr. Mitchell should not be sending out divisive and hateful tweets under the banner of the Montreal Alouettes organization."

Mitchell's account @TruthWillFree96 sent a link to a self-described documentary last week titled, "The greatest lie ever told - The Holocaust - 2015," which references the Holocaust as the "alleged murder" of six million Jews.

It's not the first time Mitchell has been in trouble over social media controversy. In 2012, he was has fined an undisclosed amount by the CFL for posting a message containing a racial slur towards Chinese people on his Twitter account.

The Alouettes signed Mitchell to the three-year contract in February.