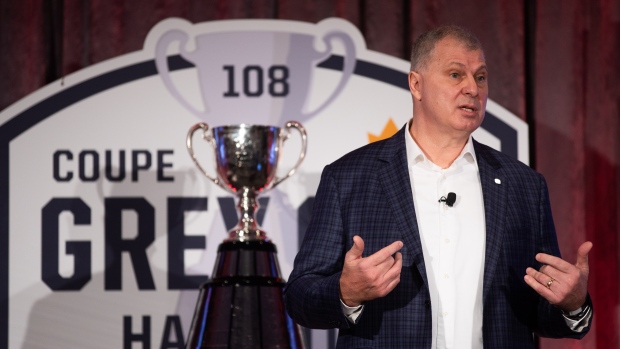 HAMILTON — CFL commissioner Randy Ambrosie was again long on optimism and short on specifics Friday in his first state-of-the-league address since 2019.

The CFL didn't play in 2020 due to the COVID-19 pandemic. Multiple sources have consistently said that cost the league between $60 and $80 million.

The CFL resumed in 2021 with a condensed 14-game regular-season schedule. Play ends Sunday with the Winnipeg Blue Bombers and Hamilton Tiger-Cats meeting in the Grey Cup at a sold-out Tim Hortons Field.

"Winston Churchill says, 'Never waste a crisis,' and I'm happy to say we didn't," Ambrosie said. "I'm not going to tell you we've been able to fix everything.

"I'm not going to suggest we don't have challenges on the horizon. We do. I want to say, frankly, we did a lot of the heavy lifting that was long overdue."

While Ambrosie spoke Friday the CFL announced a long-term partnership with Genius Sports, a data, technology and commercial company that connects sports, betting and media. On its website, Genius Sports states it has partnerships with over 400 sports organizations, including the NFL, English Premier League, NCAA, NASCAR, and PGA Tour.

Ambrosie gushed about the partnership's potential for the CFL, citing fast growth and a broadened reach for the league in existing and new markets. But again, he was short on specifics, saying most of Genius Sports' investment is technological.

Ambrosie said a big impetus of the deal was the legalization of single-game sports betting in Canada. When asked how much wagering money the CFL could receive, Ambrosie stated: "We've done some early-stage forecasting that I won't share with you, that we won't share publicly. But it's an exciting opportunity."

He also stated the pandemic forced the CFL and its teams to refine their business models, including the adoption of revenue sharing among the clubs. Again, Ambrosie didn't provide details, saying only the move was widely accepted across the league.

That was an interesting comment. It's hard to imagine officials with the CFL's three community-owned teams - Saskatchewan, Winnipeg and Edmonton, which traditionally have been the most profitable - being happy supporting franchises owned by wealthy individuals or ownership groups.

"I think now we've created an environment, we've created a philosophy that all teams can and should, if they do most of the right things, be able to break even," Ambrosie said. "Now, it's going to take a little bit more work.

"But at the heart of the philosophy is we want all teams to be able to break even if they do some, most, if not all the right things. We're going to hold each other accountable to that standard."

Brian Ramsay, the executive director of the CFL Players' Association, and union president Solomon Elimimian were both encouraged by Ambrosie's revenue-sharing revelation. The league and its players will begin negotiations this off-season on a new collective bargaining agreement as the present one expires before the start of training camp.

"This is a positive step and when the league moves in a positive direction we have to make sure we cautiously and optimistically support that," Elimimian said during the CFLPA's state-of-the-union videoconference call. "This is something we've been pushing for the last few years because we know it's very important for all nine teams to be in a healthy financial situation.

"This is one step (closer) to getting that and we look to hear more details about that program."

Ramsay said the collaboration that took place between the league and CFLPA to amend the current CBA and get football back on the field is required this off-season to ensure the two sides continue their current momentum.

"It we take that same collaborative approach, we're very confident we can find success moving forward," Ramsay said. "We are coming with that solution-based focus as we have the past number of years."

The Toronto Argonauts, owned by Maple Leafs Sports & Entertainment, averaged just 8,603 fans per game during the regular season but drew over 21,000 for their 27-19 East Division final home loss to Hamilton last weekend. Still, the franchise is expected to lose around $12 million, making a break-even prospect in the league's biggest market a very tall order.

Not that MLSE can't afford it. The organization also owns the NHL's Toronto Maple Leafs, NBA's Toronto Raptors and MLS's Toronto FC, among other entities.

Toronto also made headlines for all the wrong reasons before and after Sunday's game.

On Dec. 2, starter McLeod Bethel-Thompson, linebacker Dexter McCoil Sr., and defensive back Jeff Richards were among five Argos players who attended a Toronto Raptors' home game. That violated the CFL's COVID-19 protocols and all five were sent home by the club the following day.

Bethel-Thompson, McCoil and Richards all successfully completed the protocols and played. The other two, rush end Charleston Hughes and Canadian receiver Llevi Noel, were on the injured list and didn't dress.

Following Sunday's game, some Argos players and vice-president of player personnel John Murphy clashed with fans. The CFL suspended Murphy indefinitely Wednesday and Ambrosie said both the league and MLSE continue to investigate the matter.

"We can't have that ... we have to be a beacon for tolerance, not intolerance," Ambosie said. "We can't stand that type of thing happening.

"We deal with our business in the family and we will."

Ambrosie stated the CFL didn't change its COVID-19 protocols for Toronto. He added the league decided at the start of the season it would allow its medical personnel to "assess those situations on a case-by-case basis."

"We don't let a guy who got a C in Grade 9 science make those decisions," Ambrosie said. "We didn't change the policy, we let the doctors do what we had decided we would let them do at the very beginning of the season."

The CFL encouraged players to get vaccinated and implemented a policy that would apply to game cancellations caused by COVID-19 issues involving teams that didn't reach the vaccination threshold of 85 per cent. Game forfeits and lost pay were potential consequences.

In October, the league announced eight teams reached the 85-per cent level and figured 93 per cent of players would have been fully vaccinated by Oct. 31. The league had only one major COVID-19 outbreak that forced the rescheduling of a regular-season game.

"Some of the answer will be decided by government policy. Part of the answer has to be formed in a conversation with our players and our players' association. A lot of the story about the future for vaccination status is going to be written in the months to come and we want to be a leader ... because it's the best way to keep people safe and healthy and keep our athletes on the field."

Many have complained the level of play has fallen off. This year, Winnipeg (23 offensive points per game) was the top-scoring team and the Montreal Alouettes (371.8 yards per game) boasted the top-gaining offence.

"In a world where time pressure seems to be a constant theme, the question is, 'Do we need to make our game faster?'' Ambrosie said. "It's the general question, 'How do we keep moving our game forward?

"How do we make our game more entertaining? Faster, I think is a theme we're looking for."