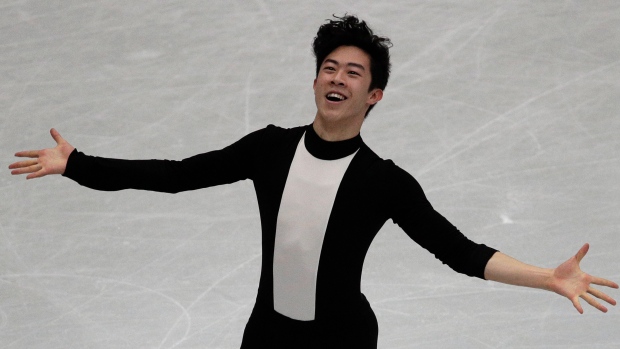 LAS VEGAS — It came as no surprise to see two-time world champion Nathan Chen of the United States top the short program with 102.71 points Friday at Skate America, the first of six events in the ISU Grand Prix of Figure Skating Series.

The pleasant surprise was a heartfelt performance by Keegan Messing.

Less than a month after his younger brother, Paxon, was killed when an SUV collided with his motorcycle, the 27-year-old Canadian closed the 12-man field with a riveting performance that left many in tears and drew a standing ovation.

"Coming here this week was a huge decision for me with everything that's happened," said Messing, who placed third with a 96.34. "I was trying to keep my mind very focused. I was distracting my mind a little bit while thinking about my wife who was sitting up in the stands supporting me. This was a very hard skate to come to. Just being on the ice the last few weeks has been one of the most difficult things that I've had to do. I've just tried to stay physically prepared, rely on my training and be able to put out a performance like that."

With every day being a struggle — mentally, emotionally and physically — Messing said he's made it a point to work specifically on his cardio, to ensure he was strong enough to compete.

Set to Ed Sheeran's 2017 hit "Perfect," Messing said the routine was made specifically for his wife, Lane, whom he married this past summer. The song was also the first dance at their wedding, and it marked the first time he was able to perform his short program in front of his bride.

"I felt like it being dedicated to my wife was also a good distraction, especially for today," Messing said. "For her to be here to see it was very special to me. I have some great support here with me. My wife's here, both my parents and some very close friends for support. Honestly, I couldn't ask for a better situation ... I've got some good people so I'm feeling pretty good.

Messing electrified the thousands in attendance by opening the program with quad and triple toeloops, and then brilliantly landing his triple axel. At the end of his performance, with tears in his eyes and the crowd roaring — some crying along with him — Messing pointed to the sky as he skated off the ice and embraced his coach, Ralph Burghart, near the Kiss and Cry.

"All the elements seemed pretty solid today," Messing said. "I was just really happy to be able to come here and just skate and just trust that I could come here and do what I could do. I feel like the real test is going to be tomorrow for the long program, but I'm just going to take everything one step at a time. I'm just gonna focus on my support group that I have around me and we're just going to try and skate as I've always skated."

In pairs, China's Cheng Peng and Yang Jin led at 72.73. Russia's Daria Pavliuchenko and Denis Khodykin were second at 71.25, and Americans Ashley Cain-Gribble and Timothy LeDuc followed at 68.20.