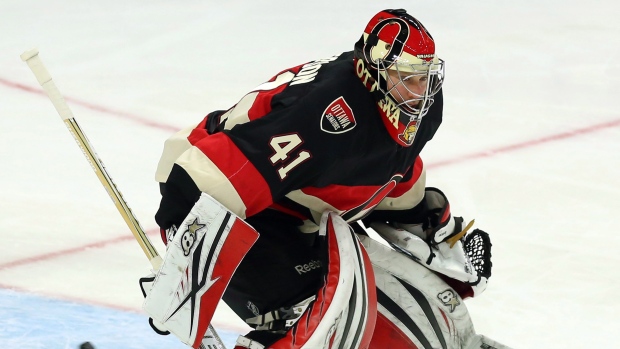 OTTAWA - Erik Karlsson wasn't going to take responsibility for his team's victory on Thursday, even if he did supply all the offence.

Karlsson scored twice and added an assist as the Ottawa Senators shut out the Columbus Blue Jackets 3-0, but the captain gave full credit to the team's bottom-six forwards who grinded down their opposition all night for the two points.

"We did what we had to do to win the game," said Karlsson. "We got a few lucky bounces and that's what you need sometimes and I think everybody contributed and I think it started with the third and fourth lines."

Seeing Curtis Lazar drop the gloves for his first NHL fight was an emotional boost for the team. While the 20-year-old doesn't plan to make it a habit, he was satisfied with the outing.

"It was about time that someone did something to try and get the guys going," said Lazar.

"I was a little frustrated the last little while there, just kind of waiting for guys to do stuff. Took the onus on me to take it upon myself and thought I'd try and spark the guys. It's a little different than junior, but I thought I did pretty good."

Craig Anderson stopped 25 shots for his seventh win of the season and 30th career shutout. Kyle Turris scored an empty-net goal to round out the scoring.

This was just the second time this season the Senators allowed 25 shots or less and Anderson said it felt pretty good to cut the workload down.

The win marked just the second time this season the Senators (9-5-5) won in regulation on home ice, but it came at a cost.

Ottawa lost Bobby Ryan late in the third after being hit by David Savard and Patrick Wiercioch left early in the second after taking a hit from Nick Foligno. There was no update on either player following the game.

Curtis McElhinney, who briefly played for the Senators in 2010-11, made 26 saves.

Columbus coach John Tortorella felt his team did some things well, but failed to play for three full periods.

"(Ottawa) deserved to win the game, I'm not going to disrespect them, but we didn't play well enough," said Tortorella. "Our offensive guys did not play well enough. The game was up for grabs."

Senators coach Dave Cameron has wanted to see more physical play from his team and was pleased with his players' response to teammates being pushed around.

The Senators had a goal called back in the third after a coach's challenge ruled McElhinney was unable to do his job as he had a player pushed into him.

Ottawa outshot the Blue Jackets 11-6 in the second period and held a 2-0 lead after 40 minutes.

The Senators made it 2-0 less than two minutes later as Karlsson scored his second of the night as Ryan created the perfect screen. Ryan now has points in seven straight games (3G, 5A).

Despite remaining scoreless, the first period wasn't without its highlights as Lazar fought Boone Jenner. Ottawa's Mike Hoffman was given a penalty shot after being dragged down, but McElhinney stopped him easily. The Blue Jackets had a number of good chances early on, but were unable to beat Anderson.

"We had a really good start, but let off the gas after the first ten minutes," said Columbus' Ryan Johansen. "We just couldn't find a way to score a goal. We had lots of chances."