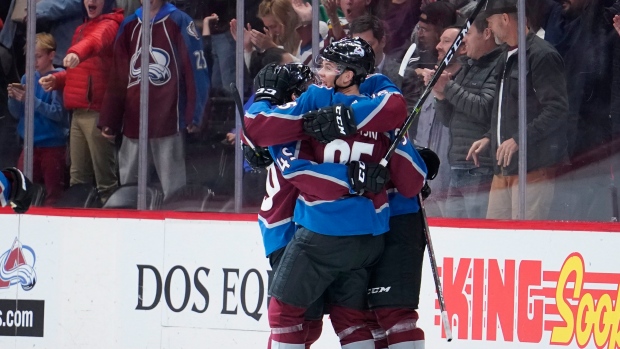 DENVER — Pavel Francouz had plenty of time to think about his first NHL start, and the 29-year-old goaltender made it a memorable one.

Francouz had 34 saves, Andre Burakovsky scored at 3:29 of overtime and the Avalanche beat the Arizona Coyotes 3-2 on Saturday night.

"I was dreaming about a moment like this my whole life," Francouz said. "I was just trying to enjoy every second of it. I was very happy that it worked out and we were able to win this game."

Francouz was signed as a free agent in May 2018. His only two appearances before Saturday were in relief last season, and he won the job as Philipp Grubauer's backup in training camp. With Colorado's top goalie looking on, Francouz had 22 stops through the first two periods and a big one in overtime.

"He made some really big saves," Burakovsky said. "That's what we needed from him. We're real happy for him to play his first game and playing such a good game, too."

Nazem Kadri and Tyson Jost scored less than two minutes apart as the Avalanche started the season with four wins at home.

Colorado is 4-0-0 for the first time since the 2013-14 season, when it opened with six straight wins and went on to win the Central Division.

Arizona goalie Antti Raanta was equally sharp in his first start of the season and first game since last November, stopping 29 shots. Michael Grabner and Nick Schmaltz scored for the Coyotes.

Arizona lost defenceman Niklas Hjalmarsson to an injury when he blocked a shot in the first period. Coach Rick Tocchet indicated Hjalmarsson could be out for a while.

"At this point I'm not sure but I don't think it's going to be day to day," Tocchet said. "That's a big loss for us. Nik's a good defenceman, but we battled hard with five defencemen. We took some penalties at the end. We're going to miss Nick if he's out for a bit."

Burakovsky got the winner after a back-and-forth extra period. Burakovsky collected the puck near the boards, glided past Arizona centre Clayton Keller and sent a high shot past Raanta for his second goal and second winner in as many games.

"I don't really know what their guy was doing. He kind of just let me walk right in the middle," Burakovsky said. "I was just a little bit patient, just trying to wait for something and not just try and take it to the net. I don't know why he wasn't skating with me, but I was wide open."

His winner capped a frenzied 17-minute finish. The teams went nearly 50 minutes without a goal and then combined for three in a span of 2 minutes, 30 seconds.

The Avalanche scored first at 6:57 of the third on Kadri's first of the season. With Jason Demers off for tripping, Cale Makar took a shot from the point that Raanta stopped. Kadri grabbed the rebound on the left side, avoided defenceman Jordan Oesterle and beat Raanta high.

The second goal came 1:49 later when Jost, battling in front, knocked in another rebound, giving Colorado a 2-0 lead with his first of the season.

"The second one was pretty much a point shot, hit their guy and bounced straight to his stick," Raanta said. "Sometimes it's tough bounces."

Grabner made it 2-1 41 seconds later with a blast from the right circle that beat Francouz to the top corner. The Coyotes tied it at 16:03 on Schmaltz's second goal of the season.

"Other than that overtime goal, I thought we played well," Tocchet said.

NOTES: Arizona RW Phil Kessel played in his 1,000th NHL game and 778th in a row Saturday night. Kessel is the 21st active player with a 1,000 games played and his consecutive games streak ranks third among current players. ... Avalanche LW J.T. Compher missed his second straight game with a lower-body injury. ... Coyotes LW Lawson Crouse was out of the lineup with an upper-body injury.

Coyotes: At Winnipeg on Tuesday.

Avalanche: At Washington on Monday.