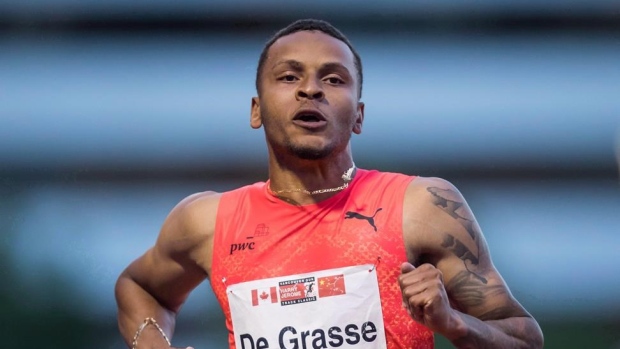 When Canadian sprint star Andre De Grasse carried the country's hopes and expectations to the 2016 Rio Olympics, his mom worried about the crushing weight on his angular shoulders.

Would her son, who'd burst onto the global scene only a year earlier, be able to handle the pressure?

As it turned out, there was no need to worry.

"He always performs better when it comes to the big races," Beverley De Grasse said — and the track world quickly learned. "Ever since the beginning of his track career, I've never known him to be nervous. I'm more nervous than he is."

De Grasse once again headlines a strong Canadian track and field team at the Tokyo Games. He's proven both in Rio and at the 2019 world championships that he has an inexplicable ability to flick the switch on when the lights are brightest.

"There's obviously pressure, but I really can't explain how I deal with it," De Grasse said with a laugh.

De Grasse provided an entertaining storyline in Rio when he pushed Usain Bolt, the world's fastest man, in the 200-metre semifinal.

With the rest of the field straining to keep up, De Grasse pulled even with Bolt in the last 20 metres, flashing the Jamaican a huge grin. Bolt grinned back. The Olympic Channel's YouTube video — titled "When Usain Bolt and Andre De Grasse smile, the whole world smiles with them" — has more than three million views.

Smiling through the Olympic pressure-cooker — who does that?

Five years later, De Grasse is still having fun, but life off the track has swelled. He and Ali are raising three kids: her son Titus, from a previous relationship, their three-year-old daughter Yuri and a son born May 14, whose name they're keeping private.

Ali, the 2019 world 100-metre hurdles champion for the U.S., believes her partner's ability to deflect pressure is partly the innocence of being a latecomer.

A multi-sport athlete as a kid, De Grasse was a City TV "athlete of the week" for basketball back in 2010.

"You don't have to be big to play basketball, but you do have to have a big heart — the perfect description of Andre De Grasse," the reporter said in the segment.

He had to take the circuitous U.S. small-college route through Coffeyville College in Kansas to get to Division 1 school USC.

"It's a lot of pressure when you start out early on, when you've been running your whole life, and you're like this prodigy," said Ali, who also ran for USC. "Andre came a bit late, you know? I think he's had so much learning and growing to do that the pressure doesn't really get to him."

A full life keeps De Grasse balanced, said Ali, who started dating him a few weeks before the Rio Games.

The years he was dogged by injuries were tough, however. Social media wasn't kind. Critics claimed he was done.

Beverley De Grasse, who was a sprinter in Trinidad & Tobago before moving to Canada, read some of the callous comments. She's glad her son didn't.

De Grasse said the two bad seasons strengthened his love for the sport.

"I'm grateful to be out there competing, representing my country," he said in a recent phone call from Slovakia, where he was doing some fine-tuning before travelling to Tokyo. "I try to think of it that way, of being grateful. A couple years ago I couldn't step on the track. It's almost better to step on the track and not do well than be sitting at home, and not being out there.

"Having the opportunity, I try to never it for granted. Not a lot of people are Olympians and now I get to go to my second Games, so I just try to go out there, take it all in and just enjoy the moment, embrace it."

De Grasse's long injury layoff was tough, but Ali said it was also a turning point that prompted their move from Phoenix to Jacksonville, Fla., to work with coach Rana Reider.

"That fresh start helped him really overcome everything that was happening," she said. "And in terms of people (posting negative comments), it's simple: just quiet the noise. People are going to talk whether you're doing good or bad. So, it's about staying out of the comments, and believing in yourself that you can overcome the injury.

When De Grasse won silver and bronze at the world championships in Doha in 2019, he did his victory laps with Yuri hoisted on one hip.

"He's always putting her clothes on backwards," Ali laughed. "I think (being a dad) helps his mind to separate things when there is a lot going on, or there is pressure to deliver in track.

"It's a healthy balance that helps him go to practice and be able to focus and be totally there when he's there and then come home and kind of compartmentalize everything."

Yuri was the inspiration behind De Grasse's children's picture book "Race With Me!" that hit stores on July 6. He also recently raised $15,000 for youth mental health charities through his program of the same name that was aimed to get cooped-up kids off the couch during COVID-19.

Beverley De Grasse can't be in Tokyo to watch her son since organizers banned international visitors due to the pandemic. But she's proud that he's more than the world-class sprinter who'll be aiming for gold in Tokyo.

He's a father who inspires his own kids, and an athlete who can inspire a generation.

"I'm so proud of the level of maturity that he has grown into, and it's just so wonderful to see him giving back and doing all these great things for kids," she said.

De Grasse has the sixth-fastest time in the 200-metre this season, and is No. 20 in the 100-metre, although he's only raced a couple of times at the shorter distance.

This report by The Canadian Press was first publishedJuly 21, 2021.