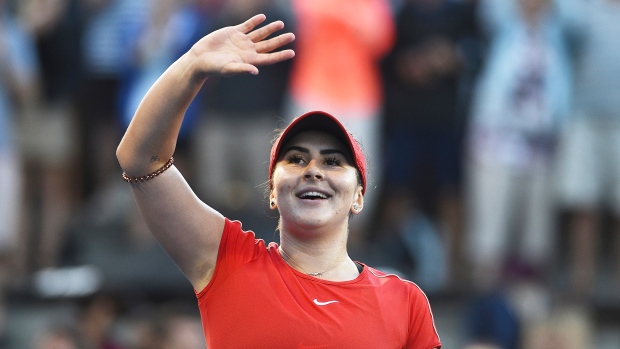 PARIS – Bianca Andreescu insists a right shoulder injury, which has kept her out of action since late March, will not slow her momentum.

"That confidence is still in me," the 18-year-old said. "I pulled out against Anett (Kontaveit in the fourth round at the Miami Open), but I’m still technically on like a 10 match winning streak so I think it's still giving me a lot of confidence going into the clay here."

Andreescu's start to the season was rem​arkable as she posted a 31-4 record while becoming the first Canadian to win a WTA Premier Mandatory event toppling Wimbledon champion Angeliqu​e Kerber in a dramatic final at Indian Wells. She started the year ranked outside the top 100 and now finds herself seeded No. 22 at the French Open.

The only thing to really slow her down so far has been a muscle tear in the rotator cuff of her right shoulder. After some rest, Andreescu has now been pain free for two and a half weeks.

"It's in perfect health," she said. "I've been taking my training very progressively the last couple of weeks. I’ve been training at the Rafa Nadal Academy, the facility was a​mazing and I got very good train​ing in so I’m feeling pretty prepared."

And now the tennis world is wondering what the kid from Mississauga, Ont. will do next.

"I heard she stopped for a few tournaments, because she was injured so it's not going be easy for her to come back very strong," noted defending French Open champion Simona Halep. "But she has enough time. She’s very young. She’s very powerful. I think she’s strong mentally so I see her in a good position and also that her future will be very good."

After falling in the final round of qualifying here last year, Andreescu plays her first ever French Open main draw match on Monday against Czech lucky loser Marie Bouzkova, who is ranked No. 121. Andreescu beat her handily (6-1, 6-2) at the 125K Series event at Newport Beach earlier this season.

"Obviously, Bianca is in a different space now than she was at the time," cautioned coach Sylvain Bruneau. "She was really playing well, lots of matches and now she's had two months off so we'll see. There’s no expectations. Just go out there and be able to compete pain-free, that’s the objective."

Although Andreescu, full of youthful exuberance, sees no reason why she can't recapture her form very quickly.

"Every tournament I go into I want to win it," she said. "I know it’s my first tournament back, but if I give 100 per cent every match that’s all that matters to me really.”

So, the lack of match play doesn't temper her expectations?

"No, it doesn’t," Andreescu said after a brief pause. "If I get good training in then I think it’s very similar to getting matches in at a tournament, because my coach and I try to put things on the line so it actually feels like I’m at a tournament, so I did that and I’m feeling really good."

How did Bruneau raise the stakes with Andreescu during training?

And Andreescu has been cashing in. Any good meals in particular?

Despite the lack of court time in the immediate aftermath of the injury, Andreescu pushed hard in training with a focus on endurance, featuring lots of running, hiking, cycling and swimming. How much has she improved in that department?

"A lot," she said. "Basically, this was my second pre-season. I had six weeks to just work on my endurance, because I think that was the one thing that was lacking in my overall game so I worked a lot on that and I'm just feeling very prepared for what’s to come."

😍”Spain is my favourite country”😍

Andreescu also met with a nutritionist to get her diet in order and a psychologist to gird her for the challenge ahead off the court.

"The main reason I wanted to see her was, because of what was happening around me," she explained. "I just wanted to have some good advice on how to deal with everything ... I think I’m doing a really good job at just improving ​as a person and as a player, which is one of my goals so I think it really helped."

"Definitely things are different," Bruneau said. "Her status has changed on the tour. Players know her better. Sponsors, a lot more requests. So, it’s very important to stay down to earth, business as usual, keep your head down so hopefully she’ll be able to do that. We’re helping to make sure she’s going to be able to do that."

Andreescu, who meditates daily to maintain her mental focus, seems to have taken her newfound fame in stride. After the Miami event, she returned home to a hero's welcome. She delivered the match ball at a Toronto FC game. She threw out the first pitch at a Blue Jays game. She sat court-side at a Raptors game.

Haha better than I thought. Thank you for giving me the opportunity and for the awesome jersey 🤟🏽 https://t.co/ug3fLsoGps

Earlier tonight, in her first appearance back in Toronto after winning the #BNPPO19, @Bandreescu_ had the exciting opportunity to walk out the @torontofc game ball.

And of course we were there to capture it. 🎾🤝⚽️ #BiancaRising pic.twitter.com/GQOD5DeLL2

And the winning didn't stop.

"Every game I went to they won so maybe I’m their good-luck charm," Andreescu said with a smile.

That's right, Andreescu's hot streak applied to even the teams she rooted for in Toronto. It seems like everything she touches turns to gold this season.

But almost all her previous wins this year came on a hard court.

"She's a great player," said Kerber, who also lost to Andreescu in Miami. "She really played well that last few months and now we are on clay so it’s always a little bit different. For me, clay is not really my favourite surface."

Dealing with an ankle injury, Kerber was upset in the first round at Roland Garros on Sunday. But Andreescu loves clay listing it as her favourite surface. And she won a doubles title in the Roland Garros junior competition a couple years ago with good friend Carson Branstine.

"It really suits my game," she said. "I like to change up the rhythm and the clay really emphasizes that and I love sliding on it as well."

Andreescu makes a compelling case that she can make another long, magical run. And it's pretty clear that her absence after that blistering start has served to only heighten the curiosity around tour.

"It's really amazing that she won Indian Wells," said 21-year-old Naomi Osaka, who won Indian Wells last year and followed that up with wins at the US Open and then the Australian Open in January. "She’s super young. It’s not often that I find someone that’s younger than me so I also thought it was really cool that she was able to push so hard. Unfortunately, I know that she got a little bit injured, but hopefully she’s going to be back. I kind of want to play her, you know, because usually I can practise with someone or play a match against them so I can get an impression of how they play, but I haven’t been able to do that yet."

Osaka and Andreescu are in the same part of the French Open draw and could face-off in the fourth round. But it's another potential showdown that has Andreescu dreaming of possibilities. She could face 23 time grand slam singles champion Serena Williams in the third round. Does that create any added motivation?

"I think so," Andreescu admits. "She's a legend and to play her would be a dream come true. I’m not that type of person that looks at the draw, but I think it's just one more motivation factor so I’m glad that popped up in my Twitter feed."