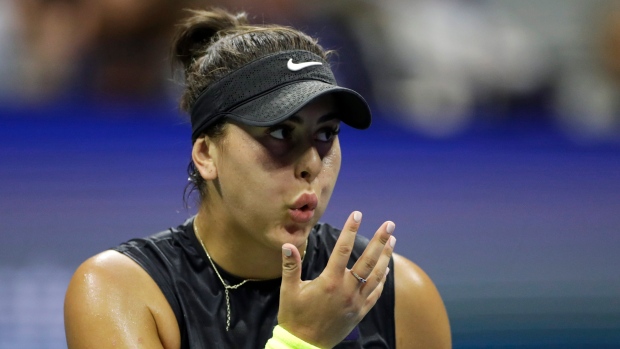 BEIJING — Bianca Andreescu won her WTA Tour season-high 16th match in a row on Wednesday, but the Canadian is not satisfied with her mental approach.

After the world No. 6 beat Elise Mertens of Belgium 6-3, 7-6 (5) in a second-round match at the China Open, Andreescu said she has to focus on stressing the positives.

"Today was more of a battle mentally with myself than anything," said the 19-year-old from Mississauga, Ont. "I felt like I was getting very down on myself. I expect a lot from myself in general, but I have to realize not everything is going to go the way I want it to."

Andreescu fought back from a 4-1 deficit in the second set and then fended off a set point to beat Mertens in a rematch of a U.S. Open quarterfinal. The Canadian also won in New York last month en route to her first career Grand Slam title.

"I can improve on a lot of things, but I think the main thing right now is definitely keeping a more positive approach to things," Andreescu said. "Even if there are 100 positives in something, if there is one negative thing that happens, that triggers something in me and I then I totally forget about all the positives.

"I just want to think of the positive as much as I can and just work with what I have."

There was some confusion about how many matches Andreescu had won in a row prior to Wednesday.

The WTA Tour clarified afterward her win streak stands at 16 matches because a walkover win for Sofia Kenin in the second round at the French Open does not count as a defeat for Andreescu.

Therefore, her last official defeat was in late March when she retired in the round of 16 at the Miami Open while trailing 6-1, 2-0 against Anett Kontaveit.

Top-ranked Ash Barty of Australia had the previous longest win streak this season of 15 matches.

Andreescu's run in the longest unbeaten streak since Victoria Azarenka won 17 in a row (including Fed Cup) in 2016 and the longest at WTA events and Grand Slams since Serena Williams won 19 consecutive matches in 2015.

Andreescu will face world No. 66 Jennifer Brady of the U.S. on Thursday in the round of 16 at the US$8.285 million WTA Tour Premier-Mandatory event.

Andreescu has won three of four matches against Brady, all played at smaller tournaments.

"I'm not expecting anything easy because every time I did play her, it was a tough battle," Andreescu said.

Andreescu said she also needs to improve on her serve. She had seven double faults against Mertens and put just 53 per cent of her first serves in.

The Canadian saved eight of 12 break-point chances for Mertens to limit the problems caused by her serve. Andreescu also converted on five of her six break-point opportunities.

The French Open champion saved five of five break points to record her 50th win of the year.

"It's a new challenge, new circumstances, different environment," Barty said. "But I'm always up for the challenge, so I'm happy to be here."

In women's doubles on Wednesday, the fourth-seeded team of Gabriela Dabrowski of Ottawa and Yifan Xu of China lost 7-5, 6-3 to Czech twin sisters Karolina and Kristyna Pliskova.

On the men's side, Andy Murray won consecutive singles matches for the first time since undergoing hip surgery in January.

After splitting the first two sets on tiebreakers, former top-ranked Murray pulled away in the third, winning 77% of first serve points to improve to 4-0 against Norrie.

"I decided like, if I want to win, I have to go and take risks and come to the net, try and finish the points quicker, which I did. I did that well at the end," Murray said.

Montreal's Felix Auger-Aliassime will face No. 2 seed Alexander Zverev of Germany in a third-round match on Thursday.

This report by The Canadian Press was first published Oct. 2, 2019.

Note to readers: This is a corrected story. An earlier version said it was Andreescu's 15th win in a row.