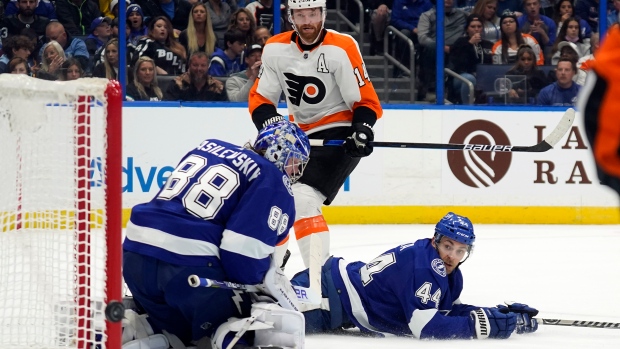 Vasilevskiy made a nifty first-period glove save on Claude Giroux’s left-circle shot. The 2021 Conn Smythe Trophy winner as the playoffs MVP has a 199-86-22 career record. It was his first shutout this season and 27th overall.

Bogosian stopped a 62-game goal drought, dating to a goal against Detroit on Jan. 12, 2020 when he was with Buffalo. Perry got his 387th career goal after going 37 games without one.

Steven Stamkos had a goal and two assists for the Lightning, who have points in 11 of the last 12 games (9-1-2). Alex Barré-Boulet had the other goal and Bogosian added an assist.

Stamkos, with 493 points, moved past Martin St. Louis (491) for the most points at home by a Tampa Bay player.

Philadelphia’s Carter Hart stopped 31 shots, including a number of strong saves. The Flyers have scored two or fewer goals in 10 of the last 12 games.

“For the last 30 minutes of the game, we weren’t very good,” Vigneault said. “Our passing game was off, created numerous amount of Grade-A opportunities for them. They were the better team.”

Bogosian opened the scoring from the top of the left circle 2:28 into the game.

Stamkos and Perry, from in-close during a delayed penalty, made it 3-0 in the second.

“I thought the second period was probably one of our best we played this year,” Stamkos said. “It really set the tone, and Vasy shut the door when we needed to.”

Barré-Boulet had a third-period goal.

Bogosian is hosting teammates and their families for Thanksgiving.

“My wife told me we were doing this,” Bogosian said with a laugh. “I’m going to be cooking for way too many people.”

Flyers D Keith Yandle played in his 939th consecutive game, and is 26 games away from passing Doug Jarvis for the longest streak in NHL history.

Flyers: C Derick Brassard left in the first with a lower-body injury. ... C Kevin Hayes (abdominal surgery) is week to week after being re-injured during his second game back on Nov. 16.

Flyers: Are at Florida Wednesday night.